The contract covering 1,600 CWA members at Frontier Communications in West Virginia and Ashburn, Va., has been extended for three months while negotiations continue.

The CWA elected bargaining team has been working to negotiate a fair agreement since early May. The current contract was set to expire August 5, but now has been extended until Nov. 4, 2017. Committee members are President Ken Williams, Local 2001; President Rick McKinney, Local 2007; President Shannon Fink, Local 2009, and CWA staff Linda Miller, Elaine Harris, and Letha Perry, chair of the committee.

Members of CWA Local 7906 held an informational picket at CenturyLink in Lebanon, Ore., to show their support for the CWA bargaining team. 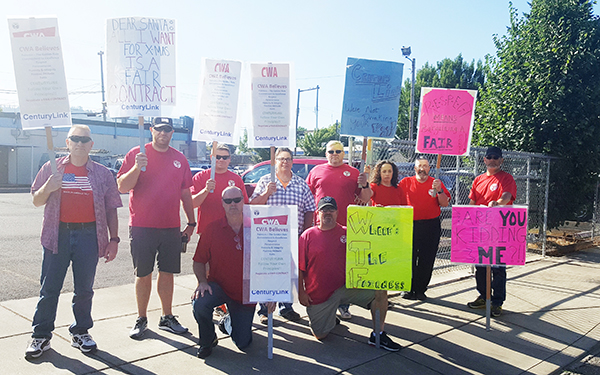 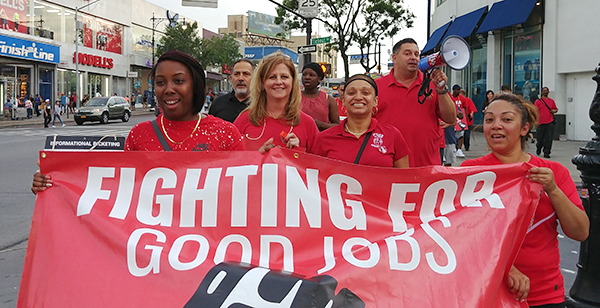 The Trump Administration has released its objectives for renegotiation of the North American Free Trade Agreement (NAFTA). The document is full of the same failed policies from decades of bad trade deals that have hurt working families and communities.

The Trump Administration objectives look all too much like the provisions included in the failed Trans-Pacific Partnership (TPP), which President Trump criticized throughout the election season. Instead of putting together a new deal that puts workers, consumers, and communities first, these new objectives simply copy failed provisions of other trade deals.

The administration’s objectives don't include eliminating the private justice system for multinational corporations called Investor-State Dispute Settlement (ISDS). The Trump plan includes provisions borrowed from the TPP that would hinder our ability to keep call center jobs here in the U.S. and put consumers' privacy and personal information at risk.

“For millions of U.S. working families, trade deals like NAFTA have been a string of one broken promise after another,” Shelton said. “Members of my union, whether they work in call centers, high tech, or auto part assembly, have been harmed by NAFTA and the bad trade deals our country has negotiated for decades. Working people pay the price for these bad trade deals through lost jobs and lost earnings, devastated communities and a lower standard of living.”

Read Shelton's letter to the USTR on how NAFTA should be renegotiated here.

As workers fight for a union at StoryCorps, a nonprofit that collects oral stories, The Nation wrote about how the company is running an aggressive anti-union campaign:

When a group of employees told management of their intention to unionize in late May, the organization declined to voluntarily recognize the union. In the weeks that followed, management required employees’ attendance at meetings where it discussed its opposition to the union and later disputed the workers' bargaining unit in front of the National Labor Relations Board. The employees have continued with their unionization campaign, and will vote on whether to unionize at an upcoming NLRB election, the date of which has not yet been set.

"We thought, like many progressive organizations, they would understand that the same values we communicate through our work we would ask for in-house," said Williams. But in mandatory meetings and FAQs distributed to staff, StoryCorps has sent the message that it does not want to negotiate with a union. "They're trying to make it seem as if the process we have chosen is not legitimate," Williams said.

Seven years ago, the Dodd-Frank act was signed into law, setting in motion measures to protect consumers and make the financial system more stable. Some lawmakers wish to turn back the clock and undo these reforms, and we are stepping up the fight to stop them.

Leaders from both the House and the Senate say it's time to pass new laws to address the predatory economic power of Wall Street banks and billionaires, and to make the financial system work for working people, not just the wealthy and the well-connected.

These members are announcing their leadership on various key ingredients of the Take On Wall Street agenda including enacting a 21st Century Glass-Steagall firewall between commercial and investment banking, closing Wall Street tax loopholes on carried interest and CEO bonuses, passing a tax on financial transactions to help pay for college affordability and other investments to help working families, and addressing the revolving door between Wall Street and government by prohibiting golden parachute pay packages for financial industry employees who go into government.

"Despite the progress since 2008, the biggest banks continue to threaten our economy," said Senator Elizabeth Warren. "For fifty years, the original Glass-Steagall Act helped produce broad-based economic growth and avoid any major financial crisis. The 21st Century Glass-Steagall Act will re-establish the wall between commercial and investment banking and make our financial system more stable and secure. Reinstating Glass-Steagall has broad bipartisan support, and it’s time to get it done."

Senator Bernie Sanders said, "One of the major reasons why the middle class is collapsing and the gap between the rich and everyone else is growing wider and wider is because of the greed, recklessness, and illegal behavior on Wall Street. If we are serious about reforming our financial system, we have got to establish a tax on Wall Street speculators. Not only would this tax discourage reckless gambling on Wall Street and encourage investments in the job creating productive economy, it would raise the revenue we need to make public colleges and universities tuition free for working families. I am proud to have introduced the Inclusive Prosperity Act with Congressman Keith Ellison to do exactly that."

Tell your Member of Congress to Take On Wall Street by clicking here.

CWA and the NAACP called on the Federal Communications Commission to adopt strong, legally enforceable rules to safeguard an open Internet and to give the highest priority to investment and job creation.

In joint comments submitted to the FCC, CWA and the NAACP urged the Commission to adopt four "bright-line" rules applicable to fixed and wireless broadband Internet access service providers.

"The urgent need to upgrade our nation's communications networks to world-class standards and to close the digital divide demands that the Commission give the highest priority to investment and job creation in formulating open Internet principles and rules. The Commission must ensure that its Open Internet rules do not have the unintended consequence of dampening the private investment needed to build the next-generation networks that will bring our nation's broadband capability up to global standards and create and maintain good jobs," they wrote. 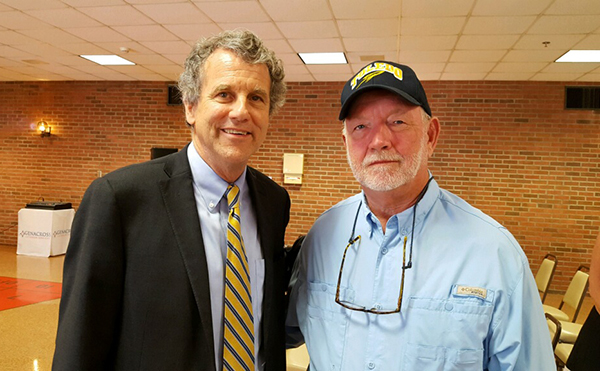 CWA Local 4319 President Bob Hull joined Senator Sherrod Brown of Ohio at a Save Medicaid press event in Toledo. President Hull was one of the speakers at the event.