The CWA District 9 bargaining teams have reached a tentative agreement with AT&T West and DIRECTV West.

The tentative four-year settlement provides for pay raises, improvements in job security and retirement benefits, continued affordable healthcare, and other improvements for AT&T West and DIRECTV West workers in California and Nevada. This proposed contract is the first for DIRECTV workers.

District 9 Vice President Tom Runnion said, "I'm proud of their solidarity and of the hard work of our bargaining teams that were determined to reach a fair contract."

Highlights of the proposed contract will be shared with Local 1298 members and a contract explanation and ratification meeting will be scheduled in the upcoming days.

In a big victory for Pennsylvania consumers, CWA has reached a settlement with Verizon that will require the company to repair and replace bad cable, defective equipment, faulty back-up batteries, and to take down 15,000 double telephone poles.

The settlement is the result of a CWA complaint before the Pennsylvania Public Utilities Commission (PUC) against Verizon for failure to maintain its copper infrastructure in violation of its statutory obligation to provide safe and adequate service to customers.

"For nearly two years, CWA documented Verizon's failure to repair the copper network and equipment, in areas where Verizon has chosen not to build out its FiOS fiber network," said CWA District 2-13 Vice President Ed Mooney. "We submitted those findings, along with substantial and expert testimony about the issue, spotlighting the threat to service quality and public safety. This settlement is a big victory for Pennsylvania consumers, who pay for and expect their telephone service to work."

"This settlement shows that Verizon cannot neglect its copper infrastructure and provide unsafe, inadequate service to its customers in order to maximize profits," Jim Gardler, CWA Local 13000 President, said. "CWA's testimony and evidence of Verizon's neglect spoke volumes. This settlement will help improve service quality and safety for Pennsylvanians. CWA will continue to monitor the issue and regularly meet with Verizon to review progress."

SOS International (SOSi), the company that provides interpreting services for federal immigration courts, illegally misclassified its employees as independent contractors and fired interpreters who spoke out, according to a complaint filed by the National Labor Relations Board (NLRB) on May 31.

"As an immigration court interpreter who takes great pride in the profession, it is good to know that the NLRB agrees that labor law safeguards are essential to the vital work done every day in court by me and fellow colleagues," said Kathleen Morris, a Chicago area interpreter.

The complaint has broad implications for the labor movement because employers in many industries misclassify workers as freelancers and independent contractors to avoid costs associated with hiring regular employees. The misclassification constitutes an unfair labor practice intended to deprive them of their labor rights, Regional Director William B. Cowen wrote.

The complaint also has significant implications for immigration courts, which are plagued by backlogs and depend on the services of qualified interpreters. Of those who appear in immigration court, 43 percent have no lawyer, and 89 percent involve non-English speakers.

Imagine trying to explain to a judge – without an interpreter – why, if you were sent back to your homeland, you would face torture, persecution and even death.

The interpreters who filed the complaint blame the Department of Justice for the untenable situation. Since the end of 2015, the DoJ has contracted with SOSi exclusively, but the company has been unable to provide sufficient staffing, resulting in canceled hearings. SOSi also has utilized inexperienced and unqualified interpreters and failed to undertake required background checks, the union organizers say.

The complaint, filed by the NLRB's LA Region, seeks an order from the full board instructing SOSi to immediately reclassify the interpreters as employees. The NLRB also demanded reinstatement with back pay for several interpreters SOSi fired in retaliation for their union organizing activities.

"At a time when the climate is not union friendly, this is a major victory," Hilda Estrada, a Los Angeles interpreter who accused SOSi of retaliation, told the L.A. Times. "I'm elated."

SOSi workers are continuing their efforts, with support from the NewsGuild-CWA and the Pacific Media Workers Guild (Local 39521). If they are successful, hundreds of immigration interpreters would be eligible to bargain collectively over pay and other conditions of employment. The NewsGuild-CWA currently represents more than a thousand interpreters at courts in California and Illinois, and at a hospital in Minnesota, with the overwhelming majority in California.

A hearing on the complaint is scheduled for Aug. 21.

Dozens of constituents rallied outside the Dallas, Tx., office of Rep. Jeb Hensarling, who is facing heat over his bill, the so-called CHOICE Act, to repeal protections that were put in place after the financial crisis. Hensarling’s bill, which constituents labeled the Wrong CHOICE Act, repeals many of the protections put in place after the financial crisis and undermines the Consumer Financial Protection Bureau, which has recovered over $12 billion to consumers. CWAers, constituents, labor organizers, faith leaders, and activists with the Texas Organizing Project, AFL-CIO, and Faith in Texas showed up in force to oppose the bill.

A full House floor vote is expected this week. If Republicans vote to pass Hensarling's dangerous bill, they’ll allow Wall Street banks more power than they've had since before the Great Depression. Hensarling has raised millions of dollars from Wall Street special interests, and met behind closed doors with Wall Street lobbyists to draft the bill. Hensarling has not held a town hall or constituent town hall this year. 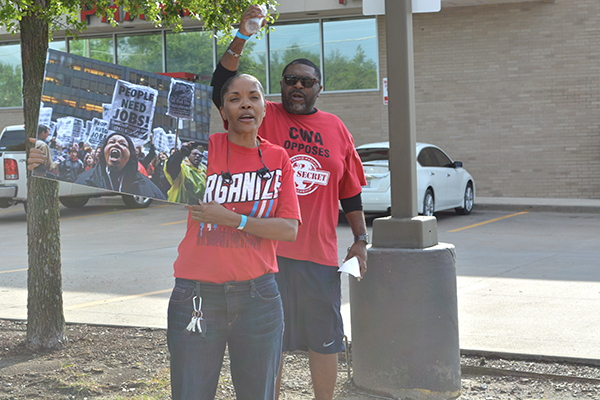 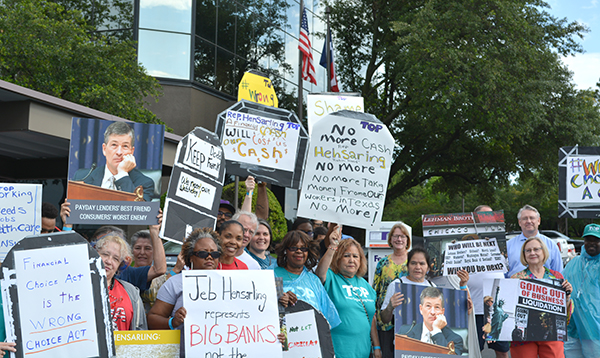 Any New NAFTA Deal Must Benefit Working People, Not Corporations

For U.S. working families, trade deals like the North American Free Trade Agreement (NAFTA) have been a string of one broken promise after another. The 200,000 jobs NAFTA was supposed to create instead morphed into 700,000 jobs lost and stagnant wages for the jobs that remained. The better deal for consumers didn't materialize. Country-of-origin and food labeling laws were challenged and environmental standards were ignored.

Now that the Trump administration says it will renegotiate NAFTA, CWA has laid out a roadmap for what this deal should look like when it comes to meeting the concerns of working families.

We are working with allies and pushing for a trade deal that creates good jobs in the U.S., maintains worker and environmental safeguards – and enforces them – and eliminates the private justice system that multinational corporations now use to challenge local, state, and federal laws not in a country's court system but before a private panel of corporate lawyers.

And we want a fully transparent bargaining process – no back room or closed door deals.

Make sure your voice is heard. Start by signing this petition to U.S. Trade Representative Robert Lighthizer and let him know that it's time to replace NAFTA with a deal that actually benefits working people in all three countries – not just multinational corporations and investors.

With President Trump declaring a focus on infrastructure this week, CWA President Chris Shelton wrote a letter to Senate Committee on Commerce, Science, and Transportation Chairman John Thune and Ranking Member Bill Nelson, as well as House Committee on Energy and Commerce Chairman Greg Walden and Ranking Member Frank Pallone, urging them to prioritize broadband investment in any national infrastructure plan in order to create good jobs and economic opportunity for all Americans.

Broadband is the essential infrastructure of the 21st century. A high-speed Internet connection provides a gateway to economic development, jobs, education, healthcare, public safety, energy efficiency, civic participation, and communication among friends and family. Yet, the Organization for Economic Co-Operation and Development (OECD) ranks the U.S. 16th in the world in broadband access and 13th in terms of average broadband speed.

"High-speed Internet is the foundation for economic activity, employment opportunity, and full participation in our society," Shelton wrote. "To ensure that every community in our nation has access to this critical infrastructure, the Communications Workers of America urges Congress to prioritize broadband in any infrastructure bill through a $100 billion program that includes direct funding, tax incentives, support to schools and libraries, and digital inclusion initiatives." 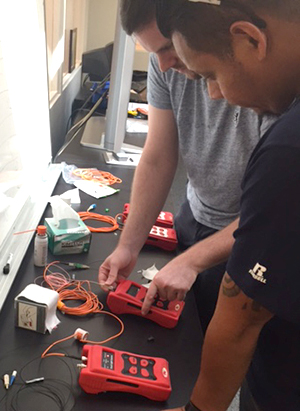 Join CWA/NETT Academy on Wednesday, June 14, 2017, at 8:00 PM Eastern, for a deep dive into the world of optical fiber, how it has influenced telecommunications today, and what the future will bring. CWA’s strategic education partner, APT College and their Master Fiber Instructor Aram (AJ) Jalili will lead a sixty-minute webinar to address the most pertinent questions regarding the world of fiber today.

What Are Light Physics, Dispersion, Attenuation, Facilitates Deployment, and what does the Future Look Like for Fiber? To Register, Click Here.

After registering, you will receive a confirmation email containing information about joining the webinar. Inquiries, please contact Kevin Celata, kcelata@cwa-union.org.