More than 22,000 AT&T workers across California, Nevada, and Hawaii went on strike, part of the district-wide three-day action at AT&T West, DIRECTV, and Mobility.

Check out District 9's video of the strike.

Members of Congress Introduce Legislation to Raise Minimum Wage to $15

"It's been ten long years since we last raised the minimum wage. While 29 states have taken action to raise their wages above the federal minimum since then, minimum wage workers in 21 states are still paid $7.25 an hour," said Rep. Scott. "This leaves a full-time, year-round worker with a dependent child living below the federal poverty threshold. Today's low-wage workers earn less per hour, adjusted for inflation, than their counterparts did 50 years ago, but productivity has nearly doubled over that same time period. That is unacceptable."

The legislation would give more than 41 million low-wage workers a raise, increasing the wages of almost 30 percent of the U.S. workforce. A $15 minimum wage by 2024 would generate $144 billion in higher wages for workers, benefiting their local economies.

To read the fact sheet on Raise the Wage Act of 2017, click here.

As President Trump backtracks on campaign promises to crack down on Wall Street, state-based lawmakers and activists are taking matters into their own hands.

On May 23, the Illinois State Senate became the first legislative body to pass a bill to end one of the most outrageous examples of Wall Street privilege – the so-called "carried interest" loophole. This loophole allows private equity and hedge fund managers to claim most of their earnings as capital gains rather than ordinary income, cutting their tax bills nearly in half. This means some of the wealthiest Americans pay a lower tax rate than millions of middle-income workers.

On the campaign trail, President Trump promised repeatedly to get rid of the carried interest loophole, saying it allowed hedge fund managers to "get away with murder." But now that he's surrounded himself with Wall Street insider advisors, Trump has issued a tax plan that doesn't mention this loophole. 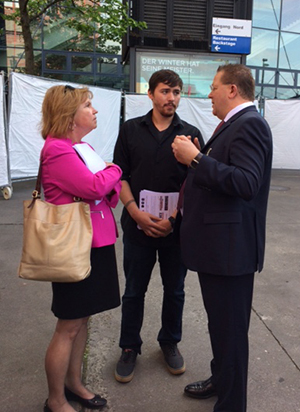 Members of T-Mobile Workers United took a stand at the Deutsche Telekom annual meeting in Cologne, Germany, this week, speaking out against the company's refusal to respect workers' rights for T-Mobile US workers.

CWA District 7 Vice President Brenda Roberts, who leads CWA’s customer service work, and Joey Askew, a TU member and customer sales representative from Denver, joined members of the German union ver.di in leafleting shareholders as they arrived for the meeting.

Ver.di is the union that represents German telecom workers at T-Mobile and Deutsche Telekom, and ver.di members have built a strong partnership with T-Mobile US workers who are fighting to get a union voice.

Following the action, Roberts and Askew met with ver.di members at a T-Mobile retail store in Dusseldorf; Roberts also met with union workers at a Deutsche Telekom call center.

"It's been really instructive to be part of this delegation and to meet with our ver.di colleagues. Seeing how different the relationship between employers and employees is in Germany and how they cooperate at the workplace makes clear how critical good labor laws are for workers and why we must improve U.S. labor laws," Roberts said.

Inside the DT annual meeting, Kornelia Dubbel, a ver.di member and member of the T-Mobile supervisory board, reminded executives and shareholders that T-Mobile US has been found guilty of setting up an illegal labor organization, "a yellow union." She called on DT's CEO Timotheus Höttges to ensure that T-Mobile follows the law, as DT promised to do, and that it gets rid of its "yellow union."

Also at the annual meeting, the head of UNI Global Union’s Information and Communication Technology Services Sector called on DT to end its anti-union stance in the U.S. "Deutsche Telekom's internal guidelines are a good foundation for a profitable company which respects human and labour rights, but they are only of actual value if they are enforced all over the world," said Alke Boessiger. UNI has called on DT management to sign a global agreement to protect workers' rights across the company's global operations.

NJ CWAers Get Out the Vote for Phil Murphy

"Phil Murphy is committed to making our state's political and economic systems once again responsive to the needs of middle-class and working families," said CWA NJ State Director Hetty Rosenstein.

The primary election is next Tuesday, June 6. 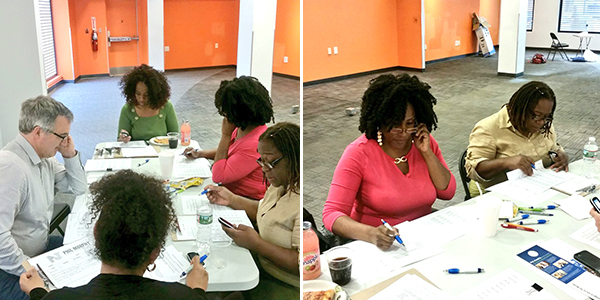 New Jersey CWAers are working the phones for Phil Murphy's campaign for governor.

In Greensboro, NC, a workshop on Runaway Inequality brought together 22 CWAers and members of four community partner organizations to take action on the economic inequality that affects working families and our communities.

Joining CWA activists were participants from AFGE, the Alliance for Retired Americans, and two local AFL-CIOs.

CWA's North Carolina Senior Campaign Lead Cesar Leyva said activists now are working together to stop the Financial Choice Act, a bill that would roll back finance industry regulations and monitoring implemented in 2010 by the Dodd-Frank Act. Wall Street is lobbying hard to get rid of these safeguards that were adopted to help prevent another financial crisis like the one caused by Wall Street and investors in 2008.

The workshops are building on the relationships that North Carolina CWAers and community groups formed in 2016. More "Runaway Inequality" workshops are set for June 15 in Charlotte and June 29 in Raleigh.

The announcement that the New York Times will be offering buyouts and eliminating editors — including the Public Editor — is devastating for our members and grave news for the state of journalism.

The Times is supposed to be a leader in our industry, and though we're heartened to hear that they intend to invest more in reporters and content, it comes at an unfortunate cost. The Times plans to offer buyouts and if it doesn't fill its "quota," management will lay off staff — primarily copy editors.

These Guild members don't simply correct comma splices, they protect the integrity of the brand. They are the watchdogs that ensure that the truth is told.

The Guild will continue to work tirelessly to protect its members and hold the New York Times' management accountable.