After giving AT&T the required 72-hour notice of contract termination last week, Mobility members have been working without a contract. CWAers are gearing up mobilization actions across the country, making sure that AT&T knows that a strike could come at any time at a date set by CWA President Chris Shelton.

A new report released today by CWA provides an unprecedented window into the company's sprawling web of 38 third-party call centers in eight countries that are driving a race to the bottom for low wages and compromising quality service for millions of AT&T customers.

The report draws on interviews and surveys of hundreds of workers in the U.S. and the global call center workforce, who detailed the harmful impact of AT&T's offshoring on workers and customers. The study also highlights the stories of U.S. communities that have been devastated by call center closures, including Ridgeland, MS; Atwater, CA; and Pittsburgh, PA. 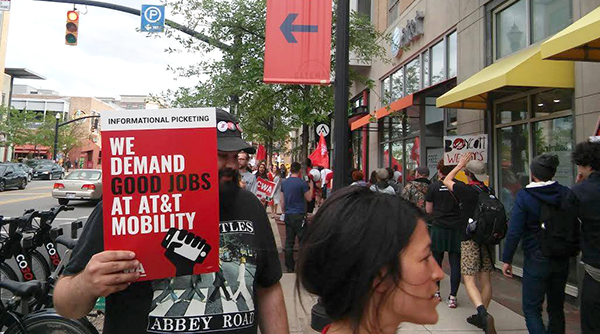 150 people gathered in Columbus, OH this week to let AT&T know that we are ready to do what it takes.

AT&T West members are building on the momentum of last week's actions. As part of Lobby Day in Sacramento, CWAers met with members of the state legislature and staff on AT&T's failure to provide high-speed broadband in the communities it serves. Now, legislators are being asked to sign on to a letter calling on AT&T to improve its high speed broadband buildout and take steps to provide better landline service to rural areas. 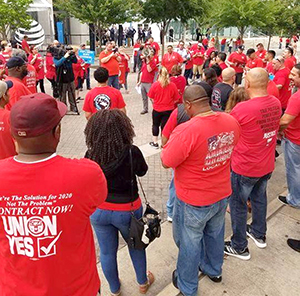 CWA members from across our union demonstrated at the AT&T annual meeting in Dallas.

CWAers turned out for the AT&T annual meeting in Dallas last Friday, putting shareholders and company executives on notice that workers are the backbone of the company and deserve a fair contract.

More than 100 CWA members from District 6, District 9, Mobility, DIRECTV, and Telecommunications and Technologies, including Vice President Lisa Bolton, leafleted and rallied outside the meeting, then went inside to vote for resolutions to improve AT&T's corporate governance. 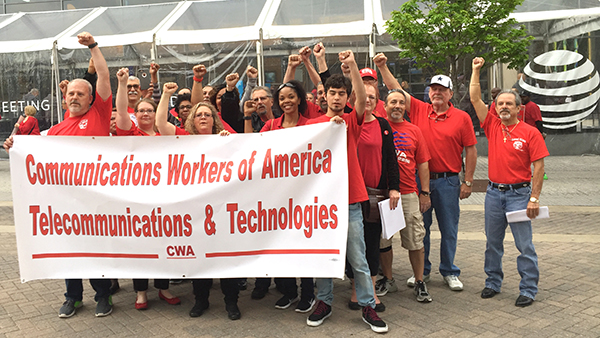 Vice President Lisa Bolton and Telecommunications and Technologies members show their solidarity in the fight for fair contracts at Mobility and AT&T West.

The 170 workers at VICE Media, who voted overwhelmingly last year to join the Canadian Media Guild, now have a first contract.

Today's vote told us everything we need to know about the Republican members of the House of Representatives who supported this bill. They voted to strip basic health care protections from working families and allow insurance companies to sell health care plans that don't cover essential care or necessary treatment like chemotherapy.

They voted to allow the states to do away with coverage for pre-existing medical conditions. That means premium costs for millions of Americans with pre-existing conditions would explode, and millions more will find it impossible to obtain health care at any price.

Union members fortunate enough to keep their coverage will be punished with higher costs under the "Cadillac tax" that Republicans left in place. Thousands of members of my union and other health care workers will lose their jobs.

This legislation is built on lies, and the American people know it. Come Election Day in 2018, many Republican House members will realize how badly they miscalculated today. The House leadership and the Republican members who supported this bill ignored their constituents, and they will pay the price. We expect that members of the U.S. Senate won't make the same mistake. 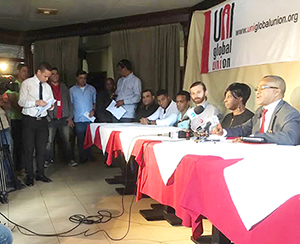 AT&T worker speak out at press conference about the horrible working conditions in call centers serving DIRECTV and Cricket customers.

AT&T workers and CWA representatives are meeting with call center vendor employees this week in the Dominican Republic to learn more about what has happened to the jobs AT&T has shipped overseas and the anti-union backlash facing Dominican workers who attempt to improve conditions.

In the Dominican Republic, workers at AT&T's vendor centers are have faced severe retaliation for advocating for their right to form a union. While Dominican labor law protects workers' rights, the government does not adequately enforce these laws.

At Alorica, a vender that serves DIRECTV customers, the base wage is equivalent to $2.13 per hour for Spanish-language service and $2.77 for English-language. Incentive pay is generally out of reach because of the unrealistic metrics required, and workers report docked pay and abusive management.

Last April, workers formed a union to advocate for better conditions. Management responded by firing or suspending workers involved, threatening to put union activists on a black list that would prevent them from getting jobs at any call center, interrogating employees about who was involved in the union, forming a company-controlled "union" led by managers, and using other forms of harassment and intimidation.

At another contractor, Teleperformance, which serves AT&T's prepaid Cricket customers, the base wage is equivalent to $2.77 per hour, with incentive pay mostly out of reach. Workers on the Cricket account have received no raises since the account started, around 2012. Since forming a union in June of 2016, they have faced an intense anti-union campaign from management, including ongoing attempts to deregister the union through the courts, firing of union leaders, threats of black listing, a prohibition on employees making pro-union comments, false accusations of fraud against workers involved in the union, and other forms of intimidation. Union leaders have faced intense harassment from management and some have been forced to quit.

The CWA delegation and Dominican Republic workers shared workplace issues and committed to continuing to support each other.

'Climate Change is Real, Urgent, and 100 Percent an Issue for Working People'

CWAers joined a crowd of more than 200,000 in Washington, D.C., who marched for jobs, justice, and climate action on April 28. More than 200 CWA members joined the D.C. event, with buses coming from Virginia and other East Coast communities. Actions and rallies were held in 370 other locations across the country.

At a labor rally ahead of the D.C. march, CWA Secretary-Treasurer Sara Steffens told demonstrators, "At CWA, we understand that climate change is real, it is urgent, and it is 100 percent a working people's issue. The same greedy corporations who ruined our economy and stole our democracy want to destroy our land, poison our water, and pollute the very air we breathe. We are not going to let corporate America steal our children’s future."

Steffens was joined by SEIU President Mary Kay Henry and other union leaders. Sandra Cohen, vice president of CWA Local 1036 in New Jersey, said she has worked for 30 years at the Department for Environmental Protection to stop the assault of corporate interests on public policy.

"The same powers that attack unions and public workers are the ones denying climate change. But we know better and that’s why we've joined this national movement to protect our planet and create good union jobs," she said. 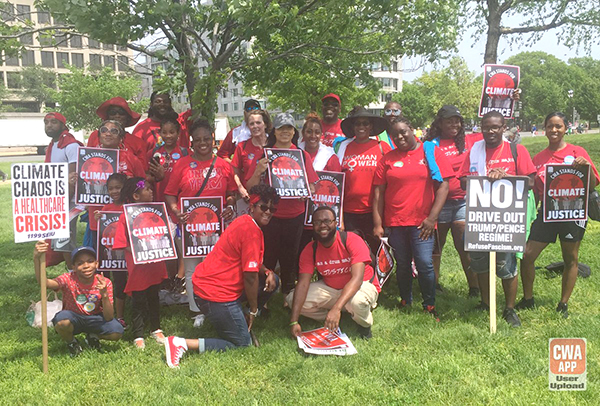 CWAers joined a crowd of more than 200,000 in Washington, D.C., who marched for jobs, justice, and climate action on April 28. 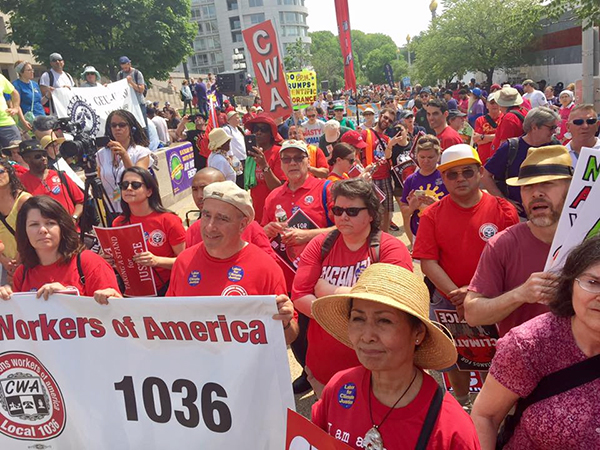 Rep. Peter DeFazio (D-OR) introduced a bill to make our tax system fairer and put the brakes on corporate greed. The legislation would institute a small sales tax on Wall Street transactions to discourage speculative financial trading that can harm the economy – a step toward leveling the financial playing field for working families.

CWA President Chris Shelton said, "Working families pay their fair share and more in taxes. It's long past time that Wall Street traders and speculators stepped up. Congressman DeFazio's plan for a financial transaction tax will put the brakes on Wall Street speculation and excesses by closing the loophole that allows Wall Street trades to avoid the kinds of sales tax that working families pay every day. We're proud to join with him and with progressive organizations that are working for real tax fairness and to counter destructive, one-sided tax proposals like those recently announced that further reward the wealthy at the expense of the rest of us."

Just like ordinary Americans pay a sales tax on the goods and services that we buy every day, Wall Street traders should pay a similar fee for the transactions they churn out, sometimes thousands of times a day. The funds generated by the FTT can be used to support national priorities that help working families.

Watch a video on the bill here.

The carried interest tax loophole benefits investment fund managers by allowing them to take advantage of a preferential tax rate, rather than the ordinary income tax rates of up to 39.6-percent that all other Americans pay. The Carried Interest Fairness Act would end this loophole by ensuring that income earned by managing other people's money is taxed at the same ordinary income tax rates as that of the vast majority of Americans.

The non-partisan Joint Committee on Taxation (JCT) estimated that this legislation, by closing the carried interest loophole, would raise $15.6 billion in revenue. This additional revenue could be invested in strengthening the middle class.

NewsGuild Workers Stand Up to Corporate-Led Assault on Journalism

Nearly 1,500 NewsGuild-CWA workers at Digital First Media and GateHouse, in 28 bargaining units across 29 newspapers, held a joint day of action on May 3 — World Press Freedom Day — as part of a national campaign to protest the corporate-led assault on quality journalism.

Alden Global Capital, a secretive New York hedge fund, owns DFM and has slashed staffing levels by more than twice the national average during the past five years, while pocketing millions by selling off the company’s real estate assets.

The 13 Digital First bargaining units represent workers at 12 newspapers, including the Denver Post, San Jose Mercury News, St. Paul Pioneer Press, and suburban publications in the Bay Area, Philadelphia, and Detroit markets. Last week, DFM announced that it would lay off more than 20 percent of the Guild-covered newsroom staff at the East Bay Times, just one week after it was awarded journalism’s highest honor, the Pulitzer Prize, for breaking news coverage of the deadly "Ghost Ship" warehouse fire in December.

The action marked the first coordinated effort by news workers at the two companies to demonstrate solidarity in the workplace and remind the public that quality journalism matters. 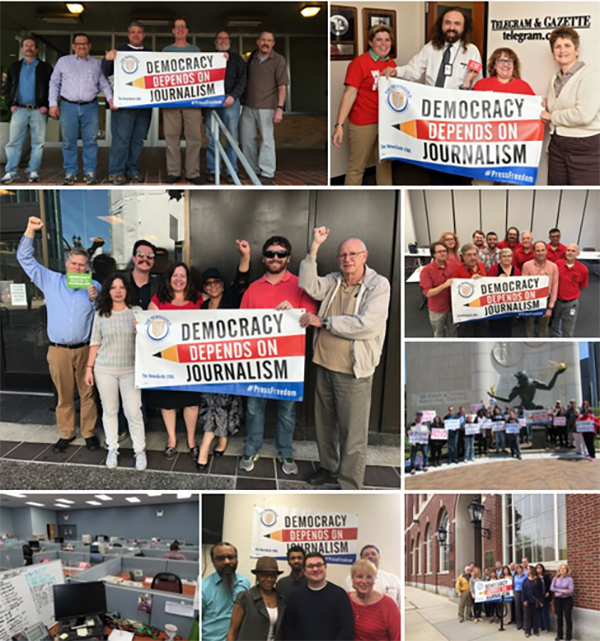 Nearly 1,500 NewsGuild-CWA workers at Digital First Media and GateHouse, in 28 bargaining units across 29 newspapers, took a stand against the corporate-led assault on quality journalism.

Pro-Worker Candidate Wins in Mississippi with Help from CWAers

Chokwe Antar Lumumba – a progressive running on an unapologetic social, economic, and racial justice platform – was declared the winner of the Democratic Mayoral primary in Jackson, MS, where CWA represents more than 1500 city workers. With nine other candidates in the primary, Lumumba won with 55% of the vote to avert a runoff election. Lumumba is expected to win the general election (Jackson is a Democratic city) on June 6 and to take office July 1.

CWA's role in Lumumba's election cannot be overstated. CWA volunteers and resources were instrumental in accomplishing this win. Lumumba was outspent 2-1 by two other candidates.

Lumumba said, "CWA was the only union that stood with me. No other union would endorse me before a runoff. I could not have won without your support."

Throughout the campaign, CWA Vice Presidents Sunkett, Cummings, and Honeycutt were in contact with Lumumba to discuss CWA's priorities for Jackson city workers, their contract, wages, privatization issues and our larger mission for social and economic justice.

Jackson will now have a progressive mayor who has committed to standing with city workers and is an example of the rise of progressive politics in the south. 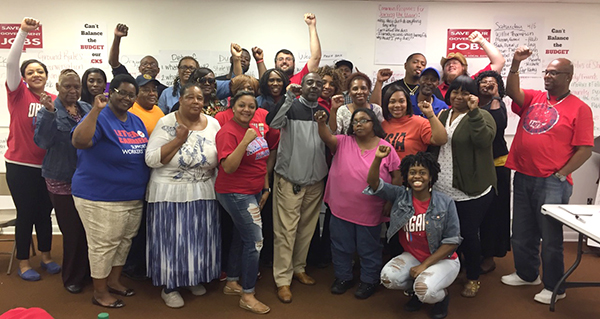 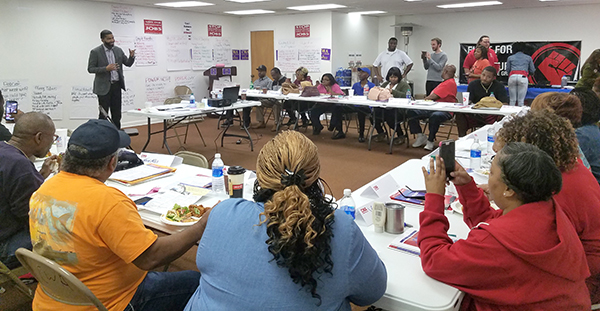