Later in the week, CWAers joined a telephone town hall where the bargaining team answered questions and members signed up for mobilization actions.

As negotiations with AT&T West resumed this week, CWAers held a Day of Action, mobilizing at more than 22 AT&T wireless stores and calling on the company to get serious at the bargaining table. Hundreds of AT&T workers from Mobility, DIRECTV, and Core joined the actions.

In Sacramento, CWA legislative and political activists met with state legislators and staff, pressing them to sign on to a letter criticizing AT&T for its focus on wealthier communities when it comes to its fiber buildout. A new report by the University of California Berkeley's Haas Institute found that across 71 percent of California, lower-income neighborhoods had to make do with slower and less advanced technologies while AT&T targeted fiber deployment to wealthier areas. 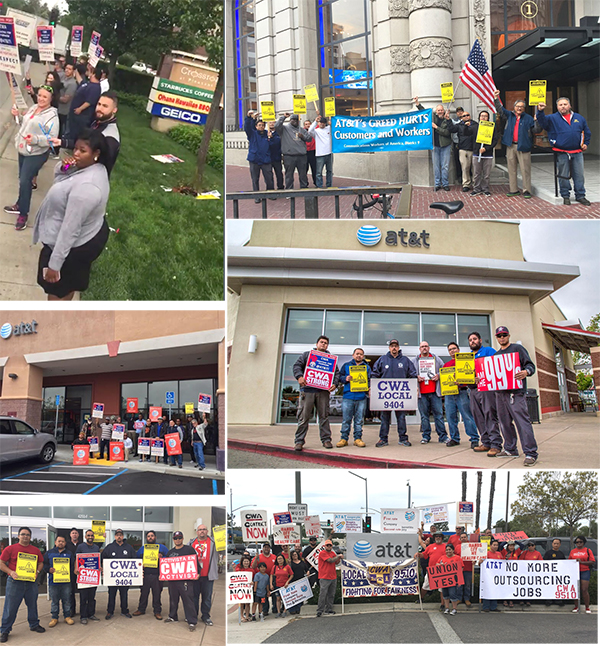 Wireless, wireline, and DIRECTV workers plan to leaflet and rally outside the meeting, and then go inside to support measures to improve AT&T's corporate governance. 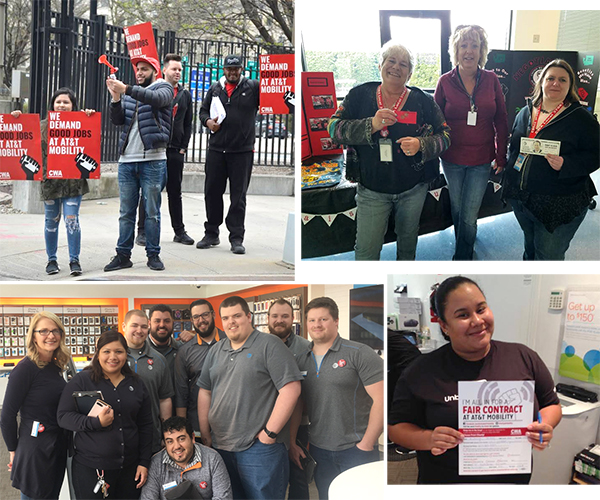 CWAers joined allies in the Jobs to Move America Coalition at a rally outside the Los Angeles Transportation Authority, spotlighting concerns about New Flyer, the nation's largest bus manufacturer.

Jobs to Move America, whose members include CWA District 9, Food and Water Watch, Environment California, Sierra Club, IBEW Local 11, Steelworkers Local 675, and others, is calling on New Flyer to step up and address serious safety and health issues and to agree to management neutrality where workers are looking to form a union.

The 570 members of CWA Local 7304 in St. Cloud, Minn., are continuing to mobilize for a fair contract. 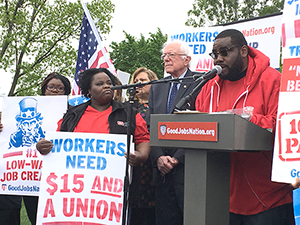 Jamone Ross, a former call center worker at T-Mobile who lost his job in 2012 when T-Mobile shipped his job overseas, spoke at the rally.

Good Jobs Nation and Public Citizen's Global Trade Watch released a report on the offshoring of good jobs by U.S. government contractors this week. CWAers joined those two groups at a rally in Washington, D.C., to call on President Trump and Congress to take action. In attendance were Senator Bernie Sanders, Senator Chuck Schumer, Rep. Keith Ellison, and Jamone Ross, a former call center worker at T-Mobile in Frisco, Tex., who lost his job in 2012 when T-Mobile closed seven call centers and shipped jobs overseas.

Despite the campaign promises of President Trump, that's exactly what’s happening. The Good Jobs Nation report quantifies the extent of offshoring by the largest U.S. government contractors as well as the absence of action by the Trump administration to keep good jobs in the U.S.

"I'm here today because I want President Trump to keep his promise and stop taxpayer-funded companies like T-Mobile from shipping our jobs overseas and violating worker rights," said Ross. "Even today, T-Mobile is fighting workers who are trying to organize a union. That isn't right.

"President Trump promised to protect American workers and stop offshoring. He could start by signing an executive order to stop contractors from shipping our jobs overseas. It’s been 100 days, and his promise is now overdue," Ross said. 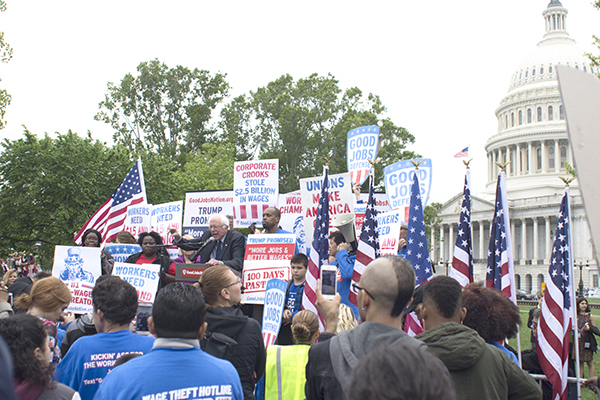 U.S. House leaders released the text of their latest attempt at repealing the Affordable Care Act, and it's full of bad news for working families.

Costs for people with pre-existing conditions would skyrocket, working people over age 50 would pay a big "age tax," and many couldn't buy any insurance at all. Insurance companies would be able to sell health care plans that don’t cover essential care or allow for necessary treatment like chemotherapy.

Unacceptable, right? Well, members of Congress and their staffers must think so, too. In fact, Republicans have exempted themselves from this proposal so far. That way they can keep real insurance protections. If this passes, the rest of us are out of luck.

A vote could happen as soon as Friday. Click here or dial 1-855-980-2231 and tell your member of Congress to oppose the ACA repeal.

Why We're Marching for Climate, Jobs, and Justice

This Saturday, more than 250 CWA activists are coming to Washington, D.C., for the national day of action on climate change and justice, and hundreds more will join sister marches in communities across the country. Find a sister march in your area here.

Outside the Labor Department, CWA Secretary-Treasurer Sara Steffens will speak at a rally, followed by Sandra Cohen, vice president, CWA Local 1036, and a 30-year employee at the N.J. Department of Environment Protection, and other labor movement leaders and activists. From there, we'll join the army of marchers and head toward the White House.

CWAers from Virginia are getting on the bus early to make sure their voices are heard.

Vera Mikell, executive vice president of CWA Local 2205 and an At-Large Executive Board member, said the most recent National Climate Assessment report on how global warming will push our infrastructure to the breaking point really got her attention. "I live in Hampton Roads, Virginia, and we are surrounded by bridges and tunnels that would be affected. Climate is so much more than weather and temperatures. This March is an opportunity for me and many others to learn how else we can help," she said.

Levi Jones, a member of CWA Local 2205, said, "Being a seasoned employee of 18+ years, I feel it's my duty as a veteran union member to pass along my passion about the community and provide guidance to the new members who may not know how or why we do things as a union family. The Climate March is one of them, where we come together, organize, and send a message on how we stand on certain issues. We stand together as one."

Krisha Haynesworth, also a Local 2205 member, said, "I believe this is our time to get involved. This is not a time for division. We are the future and nothing will change until someone steps in to make that change. We need to do our part to protect our community. I want to show the younger generation that we all need to stand up for what we believe in."

On Workers' Memorial Day and every day, CWA is on the front lines in the fight to protect safety and health standards and ensure that the Occupational Safety and Health Administration conducts the inspections and oversight that workers deserve.

In 2015, 150 workers died from preventable work-related injuries and illnesses every day in the United States, on average, according to a report released this week by the AFL-CIO. 4,836 workers died due to workplace injuries, and another 50,000-60,000 died from occupational diseases.

The report, titled Death on the Job: The Toll of Neglect, marks the 26th year the AFL-CIO has reported on the state of safety and health protections for workers in the United States. The report shows the highest workplace fatality rates are in North Dakota, Wyoming, Montana, Mississippi, Arkansas, Louisiana, Kentucky, Oklahoma, Nebraska and West Virginia.

Send photos and a report on your Workers’ Memorial Day event to David LeGrande, CWA Occupational Safety and Health Director at legrande@cwa-union.org. Click here for more information and materials. 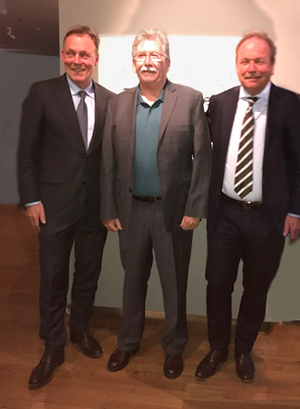 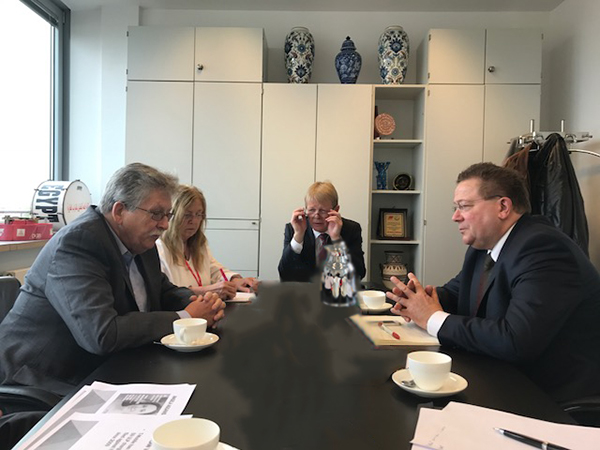 The staff of The American Prospect has formed a union, joining the Washington-Baltimore chapter of Newsguild-CWA. The publishers of the magazine, known for its progressive, pro-labor editorial policy, voluntarily recognized the union.

Labor Leaders Issue Call to Support May 1 "Day without Immigrants"

The leaders of four national unions, including CWA, are calling for broad labor support for "A Day without Immigrants." The union leaders are urging their organizations' local leaders and members to participate in the expected May 1 actions by millions of immigrants who will be striking and marching in cities and towns all across the country.