On the one-year anniversary of their contract expiration, 800 AT&T West workers took to the streets to march against corporate greed and rally for a fair contract.

Gathering around one of the busiest intersections in San Jose, CA – right outside an AT&T Mobility store – CWA activists demonstrated that they are all in this fight together. Technicians, customer service representatives, Mobility workers, DIRECTV workers, and retirees lined the sidewalks, waving CWA STRONG signs and chanting, "More work, low pay, no way!" Locals from Southern California even made a 12-hour roundtrip bus ride to be at the action last Sunday.

"We need to show them that the members in District 9 – all 17,000 of them, not just the folks that are here today – care what happens to their contract. And they are willing to work. And they are willing to go out in the streets and convince the public and the politicians in the state of California and the state of Nevada to go out and do the right thing," said CWA President Chris Shelton.

Allies from AFT, IBEW, Machinists, Teamsters, and Sheet Metal, Air, Rail, and the Transportation Workers (SMART) also turned out. Community supporters honked their horns as they drove by. Santa Clara County Supervisors Dave Cortese and Cindy Chavez, as well as South Bay Labor Council Executive Officer Ben Field, and other elected officials spoke at the demonstration, commending CWAers for standing up for good jobs and our communities.

"Enough is enough. We're fighting to save our middle class jobs," said District 9 Vice President Tom Runnion. "The CEO of AT&T just got a raise this last year. He now makes over $12,000 an hour. Can you believe that? And he doesn't want to give you a raise. He doesn't want you to have the health care you have. And he wants you to pay more for it." 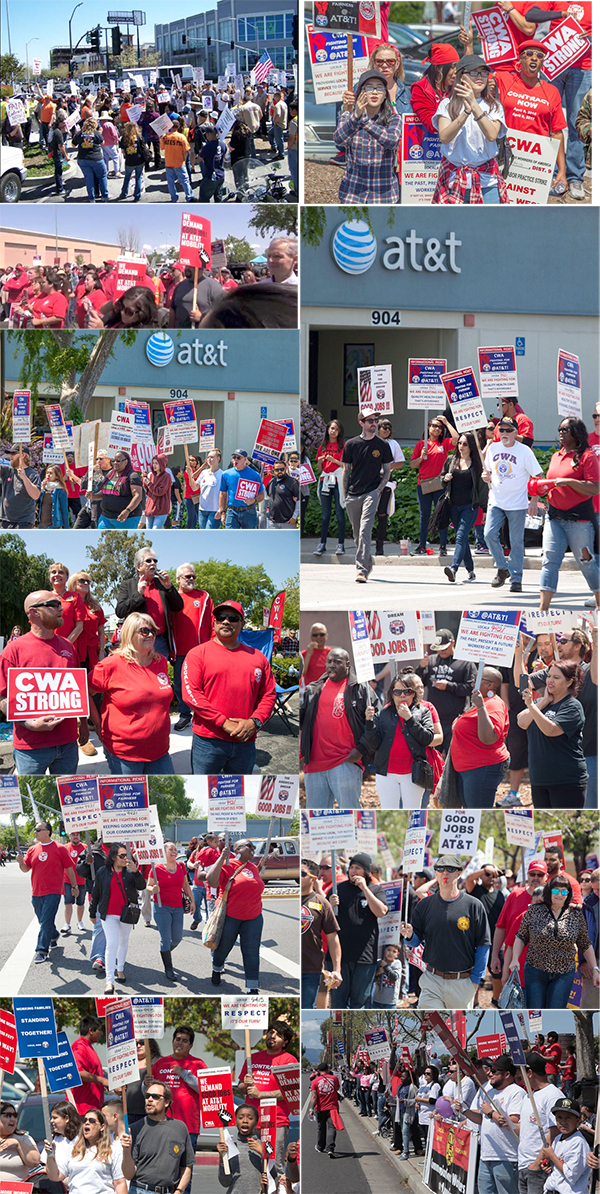 Scenes from the San Jose rally: more than 800 CWAers, plus kids, friends, and allies, marched and leafleted outside the AT&T Mobility store. CWA President Chris Shelton and VP Tom Runnion (pictured left column, middle photo) were among the speakers who fired up the crowd.

The contract provides for a wage increase of 10.75 percent, expands tuition reimbursement and paid parental leave, and included a $1,000 payment on ratification.

CWA District 6 Vice President Cummings thanked members for their mobilization and actions that made all the difference in bargaining. "I am extremely proud of the work accomplished by our bargaining committee and very grateful for the job they have done for our members," he said. "My thanks also go to CWA President Chris Shelton for his support and assistance throughout these negotiations." 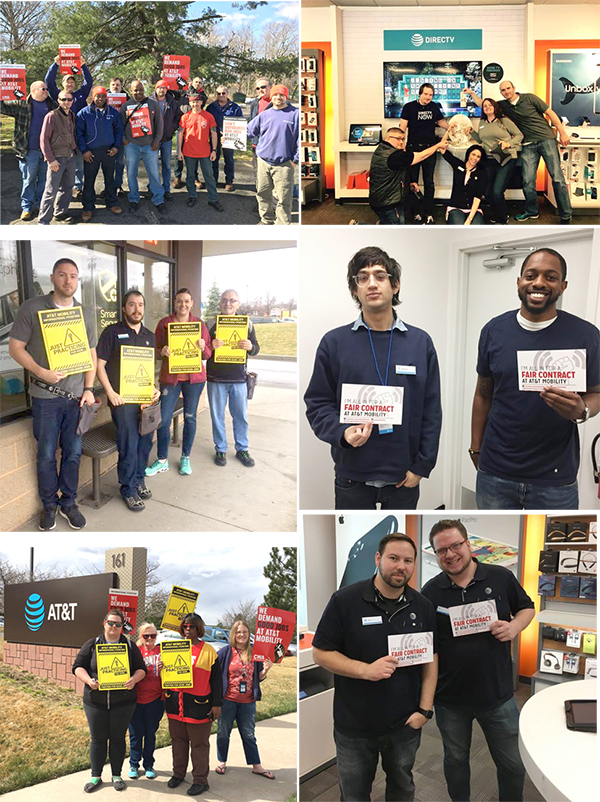 Tennessee is Not for Sale 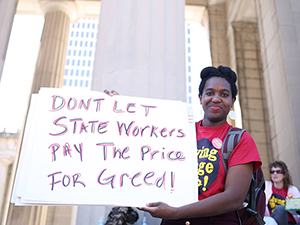 CWAers and supporters rallied at the state Capitol.

Members of CWA Local 3865, United Campus Workers, have a message for Tennessee Governor Haslam and the state legislature: Tennessee is not for sale!

CWA activists and allies are calling members of the State Senate and House, urging them to support legislation to stop Governor Haslam’s executive overreach and save jobs at the University of Tennessee and throughout the state’s public sector.

UCW-CWA represents more than 1,500 staff and faculty at UT and other state universities. Union members and supporters are rallying to put the brakes on the Haslam administration’s outsourcing agenda that will harm students, workers, and communities.

At the state Capitol, CWAers and supporters rallied in support of legislation, SB0851 and HB0618, the Tennessee Taxpayer Protection and Privatization Review Act, which will provide legislative oversight of any efforts to outsource state jobs, resources, and assets.

The bill would counter Governor Haslam’s plan to award a massive contract to real estate company Jones Lang LaSalle that would outsource thousands more state jobs. The state Department of General Services uncovered a series of troubling findings in its 2016 audit of Jones Lang LaSalle, the Knoxville News Sentinel reported.

Members of Local 3865 urged state lawmakers to stand up for Tennessee workers and communities and put the brakes on corporate greed and outsourcing.

Workers from Frontier Communications in New Holland, PA, voted overwhelmingly, 12-1, for CWA Local 13000 to represent them. The new unit comprises Communications Technicians, Central Office technicians, and Retail Sales Associates. These workers stood together as Frontier held numerous captive audience meetings with senior level executives. Wearing red shirts and wristbands, the workers entered and exited each of these meetings as a group to show their solidarity. 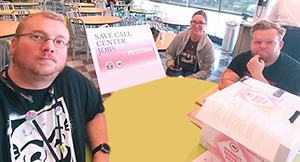 Next week, at call centers nationwide, CWA call center members will be standing up for good jobs and against the corporate greed that has sent hundreds of thousands of jobs offshore. At AT&T and T-Mobile locations, activists will be urging their colleagues to get in the fight and to sign the petition supporting the U.S. Call Center Worker and Consumer Protection Act.

The U.S. Call Center Worker and Consumer Protection Act, H.R. 1300 and S. 515, is bipartisan legislation that will help workers, consumers, and communities. This proposal requires that U.S. callers be told the location of the call center to which they’re speaking; be transferred to a U.S.-based call center on request, and make U.S. companies that offshore call center jobs ineligible for certain federal grants and taxpayer-funded loans.

Sign the petition to save U.S. call center jobs.

On April 15 in Washington, D.C., and in cities across the United States, CWA members will join workers and allies nationwide in fighting for a fair tax system and an end to big tax giveaways to corporations and the wealthy.

"President Trump and Republican leaders haven’t stopped pushing for big tax cuts for the richest of the 1 percent, plotting to take away health care coverage from 24 million Americans, and cutting programs that working families and communities count on to pay for this obscene handout," said CWA President Chris Shelton.