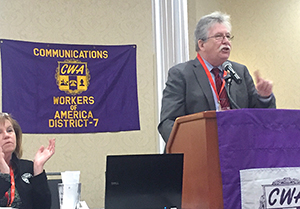 CWA President Chris Shelton spoke at the conference and commended D7 members and Vice President Brenda Roberts for their solidarity and determination to build our union.

CWA President Chris Shelton commended D7 members and Vice President Brenda Roberts for their solidarity and determination to build our union, noting that since the last district conference, more than 1,000 new members have joined CWA.

Shelton outlined the attack on workers and unions that’s in full swing, with public workers in Iowa the latest to lose their bargaining rights. "But CWA is relentless. We don't stop," he said, citing long fights for collective bargaining rights in New Mexico, for legislation promoting good jobs in Minnesota, and other campaigns throughout the district and CWA.

That determination is the heart of CWA STRONG, an action plan to talk to every eligible employee and bring them into the union as a member, then an engaged member, and finally an activist, Shelton said.

District 7 Vice President Brenda Roberts said that District 7 members are all in for CWA STRONG. Roberts, who is leading CWA's customer service initiative, outlined actions set for Customer Service Action Week starting April 17 and the push for signatures on the petition to Congress to pass the U.S. Call Center Worker and Consumer Protection Act, HR 1300 and S515. 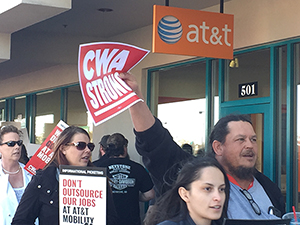 The 200 delegates rallied at an AT&T Mobility authorized retailer, then moved on to an action outside a corporate store on Sunday, calling on AT&T to reach a fair contract and stop outsourcing work. Teams from the conference also visited a T-Mobile call center and collected petition signatures from workers there.

CWAers at AT&T West will mark the one-year anniversary of contract expiration at a rally in San Jose on April 9.

CWA members – technicians and customer service representatives, Mobility, and DIRECTV workers – along with retirees and allies, are telling AT&T West to get serious about bargaining a fair contract. CWA President Chris Shelton is joining the action, along with District 9 Vice President Tom Runnion, state elected political leaders, and others.

Armando Zepeda, a member of CWA Local 9509 and mobilization coordinator, wrote this about the fight for a fair contract at AT&T West.

And check out this video with District 9’s CWA bargaining committee talking about the latest on negotiations.

In its short five years of existence, the Consumer Financial Protection Bureau has established itself as a crucial watchdog agency to hold big banks and financial institutions accountable. These protections now are at risk from the Trump administration and congressional Republicans who have been trying for years to stop the work of this consumer agency. Now, they believe there’s an opening to shut down this work.

Let's remember why this financial agency was created. The 2008 Great Recession was directly caused by fraud committed by the country's biggest banks and lenders. Millions of ordinary Americans suffered, losing their jobs, their homes and their retirement savings. Nearly 4 million mid-wage jobs, with annual earnings of about $40,000, alone were lost. Taxpayers spent about $300 billion to bail out these banks and financial firms.

Some financial institutions haven't stopped trying to exploit consumers. The difference now is that the consumers have a real, independent advocate — a cop on the street. The CFPB was created as part of the Dodd-Frank Wall Street Reform and Consumer Protection Act in 2010 to take on these banks and lenders and take them to court when they harm consumers. The CFPB has already recovered an astonishing $12 billion on behalf of almost 30 million consumers.

It has moved against the worst of the worst — payday lenders that pull customers into spiraling debt, debt collectors who push homeowners toward foreclosure, lenders who discriminate against people of color, and for-profit colleges that exploit Americans trying to obtain an education. The CFPB has cracked down on many of those responsible for the financial crisis of 2008, including shady mortgage companies who misled customers and then foreclosed on their homes, and reverse-mortgage companies whose deceptive advertisements have harmed vulnerable senior citizens.

The CFPB also has been a leader in fighting exploitative retail banking practices. Wells Fargo's illegal practices cost the bank $185 million in fines, including a record $100 million levied by the CFPB, for the bank’s years of duping customers and creating fraudulent, unauthorized accounts and credit cards.

As the CFPB discovered, lower-wage employees were pressured or even threatened with the loss of their jobs if they didn’t engage in these tactics to meet extreme sales goals. The Wells Fargo CEO was forced to resign, and the bank ended its abusive sales quota system because of the CFPB's work. Separately, the agency fined Santander Bank for enrolling customers in an overdraft service without their consent, then charging those customers fees for services they never wanted.

As the Senate considered the nomination, CWA President Chris Shelton said, "As we testified to the Senate Judiciary Committee, Judge Gorsuch has demonstrated an anti-worker bias that puts workers' lives at risk. CWA members, like millions of working people, face health and safety threats on the job every day. Working people should not be subject to the broad assault on worker protections that Judge Gorsuch seems to advocate.

Senator Jeff Merkley (D-OR) filibustered on the Senate floor for 15 1/2 hours to protest Gorsuch’s nomination and the rule change. "We are destroying the integrity of our core institutions in this nation. We need to pause and rethink that," he said.

The final Senate confirmation vote is expected on Friday.

A National Labor Relations Board (NLRB) administrative law judge has ruled that T-Mobile created an illegal workplace organization while workers have been organizing a real, independent union for a voice at the wireless company. The judge ordered T-Mobile to immediately disband the company-controlled organization.

"If T-Mobile wants to address its workers' concerns and ideas, we have democratically-elected representatives ready and willing to meet with management to discuss how we can improve our workplace," said Angela Melvin, a T-Mobile customer service representative in Wichita, Kan., who sits on the steering committee of the employee-backed union, T-Mobile Workers United (TU). "We're telling our co-workers: your voice matters. Across the country, call center representatives, retail associates, and technicians are coming together to support one another and fight for fairness on the job."

In a pair of tweets, T-Mobile CEO John Legere complained about the NLRB ruling. "This is ludicrous," he wrote. "We're appealing."

The ruling is just the latest victory for TU. From Maine to New Mexico, TU activists have won key workplace improvements, including paid parental leave and critical schedule improvements. NLRB judges have repeatedly sided with workers, ordering the company to rescind illegal policies that prevented employees from discussing working conditions, silenced victims of sexual harassment, and employees to act happy.

In a desperate attempt to stop TU, T-Mobile launched its company controlled organization, T-Voice, in 2015. This copycat organization was "chartered" to be the "voice" of employees and address their "pain points." Yet management funded this organization, handpicked T-Voice representatives, and selected the issues that would get discussed.

"T-Voice is not the voice of T-Mobile workers. It's an illegal organization run by the company to create the illusion of respect for workers," said Victoria Singer, a T-Mobile customer service representative in Albuquerque, NM. "Every day, workers are seeking out TU for help tackling the challenges we face at work. Everything we've accomplished is the result of TU members uniting, standing up, and speaking out. We will continue pushing for justice – particularly concerning the company’s unrealistic sales metrics and performance goals."

In February 2016, CWA filed a NLRB charge outlining how T-Mobile had adopted this anti-union tactic that has been illegal since Congress enacted the National Labor Relations Act in 1935.

In striking down T-Voice, NLRB administrative law judge Sharon Levinson Steckler wrote, "Whenever an employer unlawfully establishes and maintains a dominated labor organization, that organization must be disestablished."

T-Voice has failed to stop the growing momentum and energy of the real union’s organizing campaign. One year ago, TU took a major step forward by formally electing Chief Stewards, co-workers who are their union representatives. Workers opened their first national field office in Wichita, and they continue to forge workplace partnerships with Germany's largest union ver.di.

How can unions help create a social movement to take on Wall Street's economic and political dominance?

That’s the question that the Communications Workers (CWA) are tackling with labor educator Les Leopold. The training program they've put together, based on his book Runaway Inequality: An Activist’s Guide to Economic Justice, has already reached hundreds of union members and community activists in a dozen states—where it's getting rave reviews and helping fuel the growth of local coalitions.

Participants get a crash course in the rapidly growing gap between the super-rich and ordinary workers. They learn how the ever-growing power of hedge funds and private equity managers has put our government in thrall to the billionaire class and contributed to environmental devastation, racial discrimination, an outsized prison population, and plummeting wages.

"We went over it, we practiced it, and we did it—and they sent us out into the world," says Dennis Dunn, a Verizon FiOS tech and chief steward with Local 1108 on Long Island. Now dozens of rank-and-file trainers regularly lead the workshops for other union members and community activists.