For months, CWAers and allies including Good Jobs Nation and the Working Families Party have been flooding senators' offices with phone calls and rallying against Puzder’s disdain for working people.

CWA President Chris Shelton said, "The withdrawal of Andrew Puzder for consideration as Secretary of Labor is a victory for working families and demonstrates the power of grassroots resistance and mobilizing against corporate greed.

"Puzder was an outrageous pick for Labor Secretary and to head an agency responsible for promoting the welfare of wage earners, job seekers, and retirees. His long record of public statements and action opposing a fair minimum wage, overtime pay, and other basic policies that support working families made him an unacceptable choice.

"The Department of Labor is supposed to be on the side of working people when it comes to keeping jobs safe, stopping employer abuse, and safeguarding workers' rights on the job. That’s what working people want from the Secretary of Labor."

Celebrating the withdrawal of Andrew Puzder for consideration as Secretary of Labor, CWAers and other union members, low-wage federal contract workers, allies from the U.S. House and Senate including Senators Elizabeth Warren and Bernie Sanders, faith leaders, and more rallied on Capitol Hill, showing strength for the fights that lie ahead.

Justin Smith, a T-Mobile worker from Wichita, Kans., spoke at the rally, calling on President Trump to keep his campaign promises to American workers.

"Recently, I started joining together with my colleagues in an organization called T-Mobile Workers United, affiliated with the Communications Workers of America," Smith said. "Since we started organizing, the company has fought us with firings, gag rules, threats, surveillance, and even an illegal company union."

Brittany Butler, a federal contract worker and leader of Good Jobs Nation, told the crowd that the federal government was the largest employer of low-wage workers. "Even though we work hard, we struggle to put food on our table. That's why we're standing together," she said. 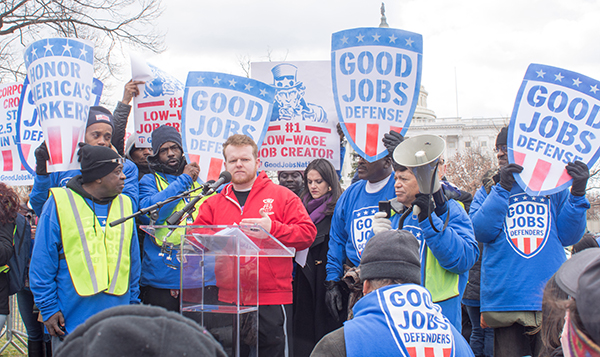 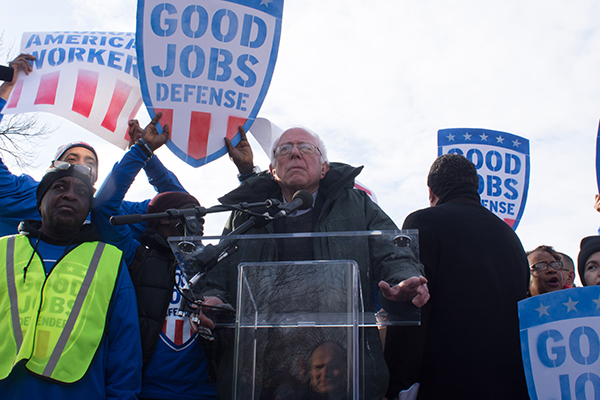 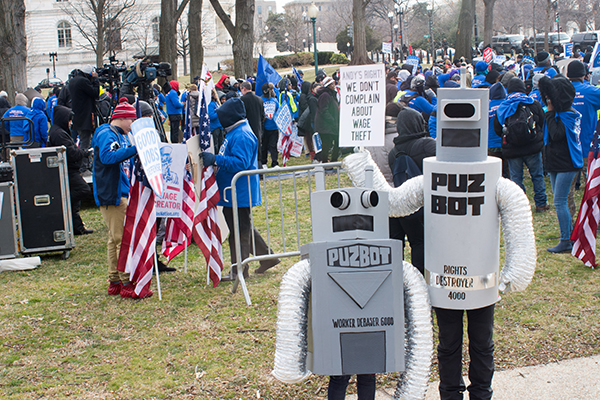 The "Puzbots," robots – exactly the kind of workers that Andy Puzder likes – made an appearance. One of Puzder's more outrageous statements was that he preferred robots to human workers because, "They're always polite, they always upsell, they never take a vacation, they never show up late, there's never a slip-and-fall case, or an age-, sex- or race-discrimination."

Workers at Momentive Performance Materials in Waterford, N.Y., ratified a new contract, ending more than 14 weeks on the picket line. The 700 members of IUE-CWA Locals 81359 and 81380 went back to work on Feb. 15.

New York Governor Andrew Cuomo was directly involved in the negotiations and helped bring about the tentative settlement. Many New York State elected officials supported the Momentive workers and joined them on the picket line. The strikers were bolstered by support from throughout the labor movement. 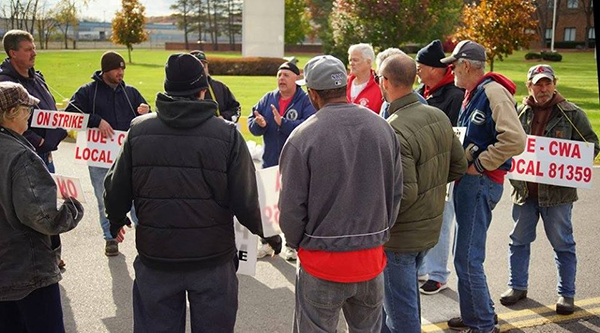 Workers picketed 24 hours a day/7 days a week throughout the 100-day strike.

In California and Nevada, Mobility workers joined forces with AT&T West members in actions outside wireless stores. AT&T West CWAers have been mobilizing and pushing for a contract for nearly a year.

Mobility members are working under an extended contract that can be terminated with 72 hours' notice. CWAers have made it clear that we are fighting back against AT&T's attempt to hurt our jobs by closing retail stores and shifting work to authorized dealers, cutting commissions, moving call center jobs overseas and other actions. 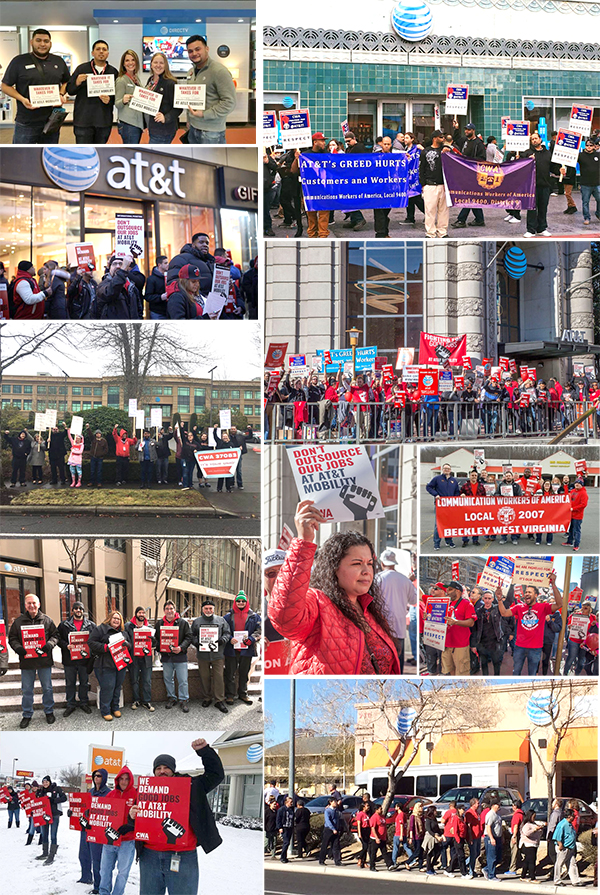 Nurses will vote on the proposed contract on Feb. 21, from 7 a.m. to 7 p.m. More details available here.

The Berger-Marks Foundation was established in 1997 to honor the memory of Edna Berger, the first woman lead organizer for The Newspaper Guild-CWA, and her husband, the legendary Tin Pan Alley song-writer Gerald Marks, who bequeathed his fortune to set up the Foundation.

Angelica Clarke, executive director of the Albany Social Justice Center, received the Edna Award for Social Justice, for her work on issues of mass incarceration and prison justice, as well as her work organizing and bargaining for graduate students at the State University of New York. The award includes a $10,000 prize.

The three Kate Mullany Award recipients receive $1,000 grants. They are: