Workers at the Momentive chemical plant in Waterford, N.Y., have reached a tentative agreement after standing together for 14 weeks on the picket line. Details of the tentative settlement are being provided to the 700 members of IUE-CWA Locals 81359 and 81380; contract explanation meetings will be held this weekend. If members ratify the proposed agreement, they will return to work on February 15.

New York Governor Andrew Cuomo was directly involved in the negotiations and helped bring about the tentative settlement. Many New York State elected officials supported the Momentive workers and joined them on the picket line. The strikers were bolstered by support from throughout the labor movement.

CWA District 1 Vice President Dennis Trainor said the CWA bargaining team "believes it has hammered out a deal that will give our members – both active employees and retirees – peace of mind for themselves and their families."

CWA has been named a member of the creditors committee as part of Avaya's bankruptcy filing. The creditors committee plays a significant role in investigating the company's actions and overall financial condition, and in overseeing the process of reorganization. The other committee members are AT&T, the Pension Benefit Guaranty Corp., SAE Power, Flextronics, Network One, and Westron.

Separate from this role, CWA and the bankruptcy counsel we have retained will continue to diligently represent our members' interests, said Lisa Bolton, vice president of Telecommunications and Technologies. CWA represents about 550 active workers and thousands of retirees at Avaya.

Deputies, sergeants, and investigators in the Doña Ana County (New Mexico) Sheriff's Department will receive pay raises and be covered by the CWA local's proposed new contract following a federal arbitrator's decision that was affirmed by a state district court judge.

The final step in the process is approval of the contract by the Doña Ana County Board of County Commissioners. That meeting is scheduled for Feb. 14.

The 90 Sheriff's Department staff, members of CWA Local 7911, will receive pay increases totaling $750,000. The total value to workers of the contract that's been affirmed is $1.1 million. 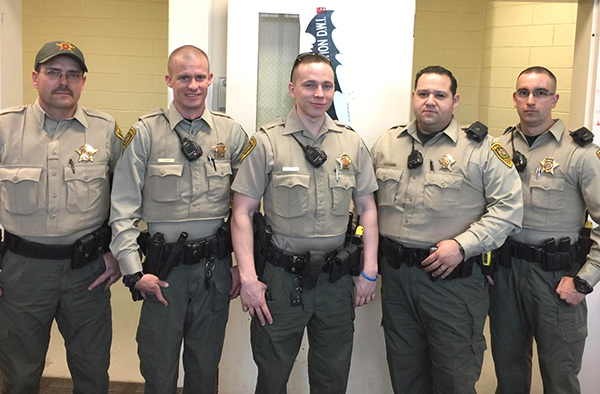 By a 93 percent vote, AT&T Mobility workers authorized a strike if a fair contract can’t be reached.

On a media conference call announcing the strike vote, Ghiajaira Paz, a retail store worker in New York, said now there were just four floor representatives in her store, down from seven not too long ago. "I can't take so much as an hour off because we're short-staffed…And because of cuts in our commission structure, I have to make more sales and work ten times as hard to get the same amount of commission as I did before."

Nicole Popis, a customer service representative in Illinois, said AT&T is continuing to cut call center jobs, sending thousands offshore. "At my call center, I’ve seen our staff shrink from 200 employees down to 130, and I worry about my job constantly."

On Friday, AT&T Mobility workers will rally in 35 cities, coast to coast. Actions also will be held on Saturday, Feb. 11 as CWAers countdown to contract expiration. Read more here.

Bargaining got underway this week covering about 300 technicians, warehouse, and administrative workers at DIRECTV Mid-Atlantic and West, in Delaware, Maryland, New Mexico, and Oregon. 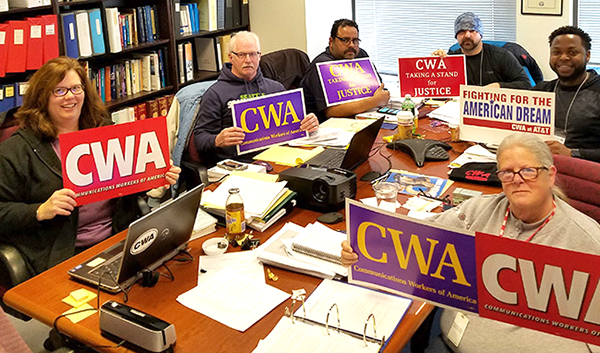 CWA Local 7901 in Portland has received voluntary recognition from the environmental non-profit group BARK for 16 employees and is scheduling negotiations now.

A new group of New Partners Teleservices employees joined CWA Local 7212 when a majority of the 12 At-Home-Agents (AHA) signed up for union representation. This is the latest group of New Partners employees to join CWA through a card check and neutrality agreement with the company that has already resulted in almost 150 members. The company has also announced plans to add another 40-50 employees in the near future.

The confirmation hearing for anti-worker Secretary of Labor nominee Andrew Puzder has finally been set for February 16th, after being pushed back four times.

The hits keep coming against Puzder, the CEO of fast-food conglomerate CKE Restaurants, which owns Hardee's and Carl's Jr. Puzder is a staunch opponent of raising the minimum wage, and has said he prefers robots to human workers.

The Washington Post published a piece by JoAnn Wise, who worked for Hardee’s for 21 years:

"I already know what Trump/Puzder economics look like because I'm living it every day. Despite giving everything I had to Puzder's company for 21 years, I left without a penny of savings, with no health care and no pension. Now, while I live in poverty, Trump, who promised to fix the rigged economy, has chosen for labor secretary someone who wants to rig it up even more."

Call your Senators now at 1-855-534-1774. Tell them to oppose the anti-worker Andrew Puzder for Secretary of Labor. 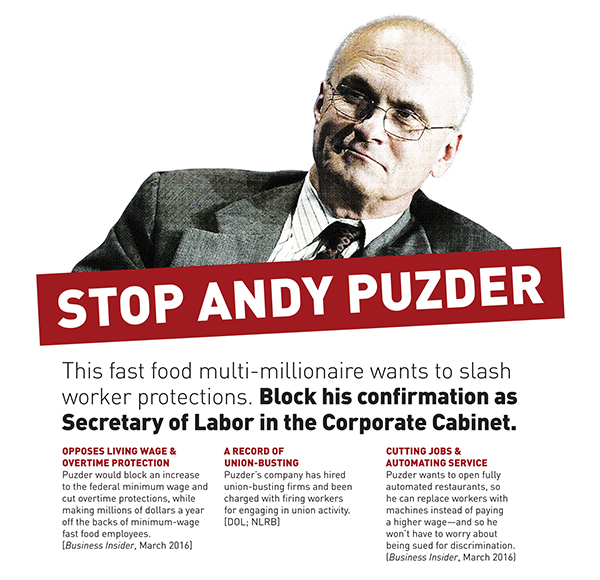 Democratic Senators Bob Casey (D-PA), Tammy Baldwin (D-WI), Joe Donnelly (D-IN), Heidi Heitkamp (D-ND), Joe Manchin (D-WV), and Claire McCaskill (D-MO) sent a letter to President Trump encouraging his Administration to take action to help protect and bring call center jobs back to the United States, noting that the industry had lost hundreds of thousands of jobs over the past decade due to offshoring.

The letter to President Trump reads, in part:

"We are writing today to strongly encourage you to not only focus on bringing back manufacturing jobs, but service sector jobs as well; in particular customer service and call center jobs. We urge you to take executive action and to support legislation to help protect and bring call center jobs back to the United States."

Additionally, the letter highlights that offshoring call center jobs has put American consumer information at increased risk. For example, in October 2016, the U.S. Department of Justice released an indictment against a group of perpetrators operating out of Indian call center whose "enormous and complex fraud scheme…resulted in hundreds of millions of dollars in victim losses from…over 15,000 known victims" in America.

The Senate Democrats' letter concludes with a call for President Trump to take related executive action and for the White House to support soon-to-be-introduced call center legislation similar to bipartisan bills introduced in past sessions of Congress.

For example, Senator Casey's "United States Call Center Worker and Consumer Protection Act," introduced in the last Congress, would require that U.S. callers be told the location of the call center to which they are speaking; would offer callers the opportunity to be connected to a U.S.-based center if preferred; and would make U.S. companies who offshore their call center jobs from the U.S. ineligible for certain federal grants and taxpayer-funded loans.

CWA, the consumer group Public Citizen, and the Natural Resources Defense Council (NRDC) went to court to block the Trump administration from implementing an executive order requiring federal agencies to repeal two federal regulations for every new rule they issue.

The executive order requires new rules to have a net cost of $0 this fiscal year, without taking into account the value of the benefits of public protections.

CWA President Chris Shelton said, “It is unbelievable that the Trump administration is demanding that workers trade off one set of job health and safety protections in order to get protection from another equally dangerous condition. This order means that the asbestos workplace standard, for example, could be discarded in order to adopt safeguards for nurses from infectious diseases in their workplaces. This violates the mission of the Occupational Safety and Health administration to protect workers’ safety and health. It also violates common sense.”

Apply for the Beirne Foundation Scholarship for 2017-2018

The CWA Joe Beirne Foundation will award 15 partial college scholarships of $3,000 each for two years for the 2017-2018 academic year. Eligible for the scholarships are CWA members, their spouses, children, and grandchildren, including the dependents of retired, laid-off, or deceased members. Applications are available only online at the Foundation's website. The final deadline for the 2017-2018 school year is April 29, 2017. 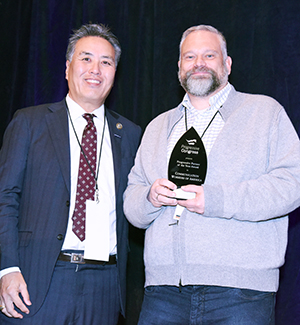 The Congressional Progressive Caucus named CWA its partner of the year, commending the union and activists for our work on trade, social justice, Wall Street reform, and other issues. Rep. Mark Takano (D-Calif.) presented the award to CWA Legislative Director Shane Larson. "CWA's grassroots work and expertise will advance our cause and strengthen our ability to show the American people who is really on their side," Takano said.