More than 1,000 CWA women and men came to Washington, D.C., last Saturday to stand up for justice and dignity for all and to protect our rights. They joined a crowd that grew to half a million people, who rallied near the U.S. Capitol then marched to the White House. Many thousands more joined marches in their own cities.

As buses rolled into CWA headquarters, CWA President Chris Shelton, Secretary-Treasurer Sara Steffens, and AFA-CWA President Sara Nelson greeted the riders, many of whom left their homes just after midnight.

Shelton told the crowd, "Today is the first day of our fight, and we will win."

Participants came together in hundreds of cities across the U.S. and around the world, holding rallies and actions, and pledging to stand together for as long as it takes. 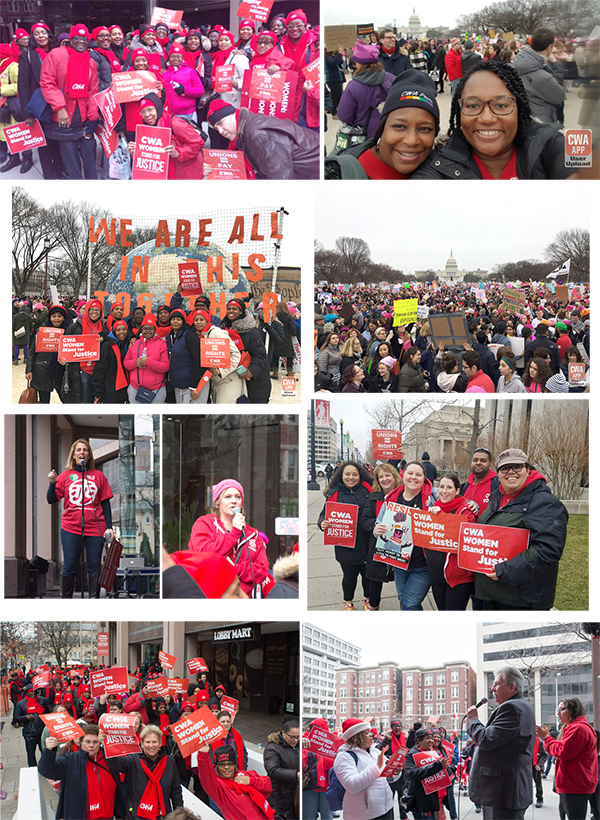 AT&T had an incredibly successful 2016, posting profits of $13.3 billion, according to the company's latest financial report released yesterday. Revenue is up 11.6 percent over 2015.

There was a lot of good news, and CWA members, whether we're working at wireline, Mobility, DIRECTV or Internet Services, know that it's our hard work that makes these profits possible.

Across the country, CWA members are standing together and putting AT&T on notice: "We service the customers. We sell the plans. We maintain the network. We deserve our fair share."

The CWA bargaining team opened contract negotiations with AT&T Mobility yesterday. The "orange" agreement covers about 21,000 workers in Districts 1, 2-13, 4, 7, and 9.

Across the country, AT&T workers held informational pickets outside Mobility stores and showed their solidarity with inside actions at call centers and retail stores.

CWAers are united, ready to do whatever it takes to win a fair contract. The current contract expires Feb. 11. 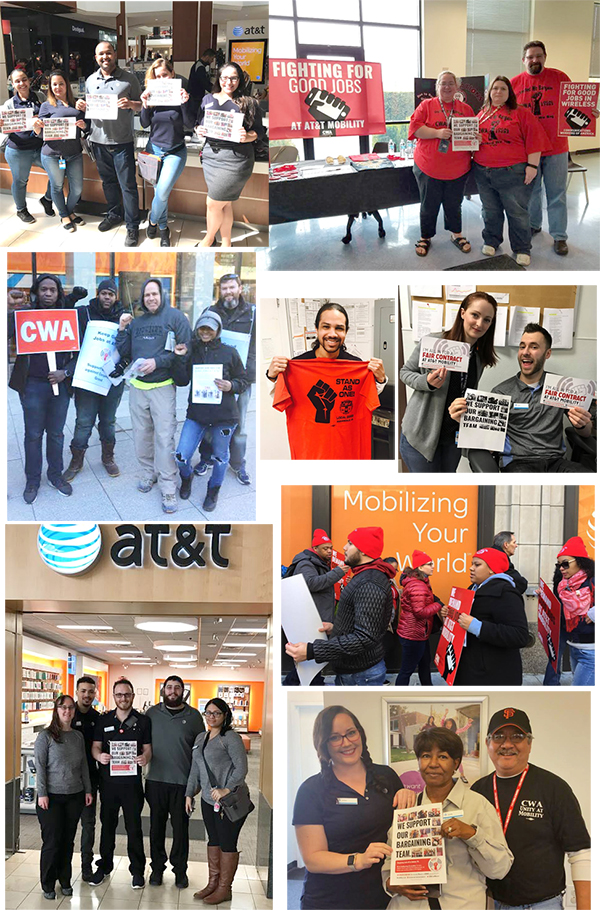 CWAers in District 9 used AT&T's very positive fourth quarter earnings report to remind the public and the company that the technicians, call center representatives, and other workers play a big part in the company's success. But AT&T's greed is hurting customers and workers.

Orange Richardson, a technician in San Francisco, told the media, "Across California and Nevada, AT&T is eliminating good, middle-class jobs in our communities and is undercutting technicians whose customers depend on for quality service. AT&T has cut 7,000 call center jobs, closing some centers altogether, in California and across the country. More jobs have been shipped to Mexico, the Philippines, India, and other countries. More jobs have been shipped overseas. What kind of future will our kids have if a company that makes a billion dollars a month eliminates good jobs in California?"

Local elected officials are signing on to a letter supporting CWA workers, and CWAers are standing with Mobility workers who just began negotiations for a new "orange" contract.

CWA Telecommunications and Technologies Vice President Lisa Bolton said CWA is actively working to safeguard the workers and retirees of Avaya as the company moves through the bankruptcy process.

Avaya announced on Jan. 19 that it was filing for bankruptcy protections. CWA has retained bankruptcy counsel and is diligently representing our members' interests as this process goes forward. CWA represents about 550 active workers and thousands of retirees at Avaya.

In a piece in the Huffington Post, CWA President Chris Shelton wrote about the disturbing picks for cabinet nominees now going through confirmation hearings in the U.S. Senate:

It's not very difficult to run for political office as an outsider and claim that you'll do everything differently than anyone else. When you have never held office and governed, you have the advantage of having no track record at all.

Throughout the campaign, now President Donald Trump led his rallies with chants of "Drain the swamp," his catch phrase about getting rid of politicians he called corrupt and ending Wall Street control over our economy. But now we've learned that "Drain the swamp" actually means, "Drain the swamp and then fill it with advisors who are ready to pursue their Wall Street agenda, whether that means getting rid of consumer protections from abuses of the Big Banks, rejecting efforts to pay workers' overtime wages, or vowing to privatize the Medicare program that has done so much for our nation's seniors."

Soon up for Senate confirmation will be Rep. Tom Price to head the Department of Health and Human Services. This is a disturbing choice for many reasons.

Price has led the charge to privatize Medicare, which would seriously jeopardize the lives of millions of Americans and particularly harm seniors.

CWAers are continuing to mobilize to Stop the Corporate Cabinet. CWA locals have been leafleting worksites at least one day a week about these nominees, and calling their Senators to tell them to oppose the Wall Street takeover of our government. 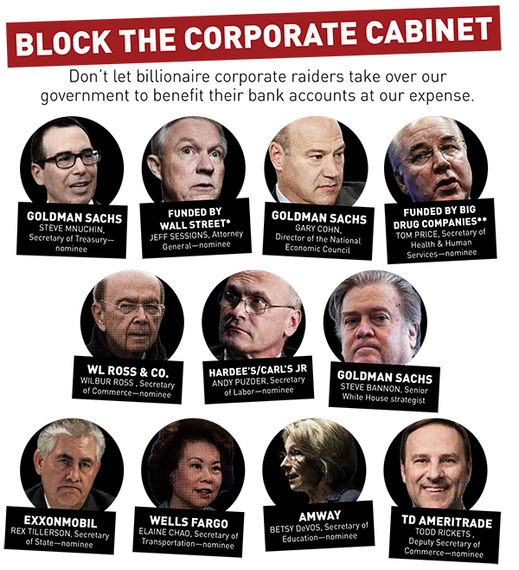 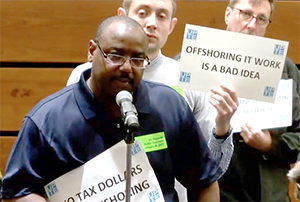 UCSF employees and allies from other campuses, including Mike Holford, an electronics tech at UC Santa Barbara, challenged the UC Regents' decision to offshore dozens of family-supporting IT jobs.

At a public hearing today, University of California (UC) San Francisco employees strongly urged the UC Board of Regents not to replace information technology staffers with lower-paid workers from India.

In February, 79 workers in UCSF's IT department are expected to lose their middle-class, family-supporting jobs. UC has not heeded calls of two US Senators and seven other Members of Congress who have pressed UC President Janet Napolitano to stop the impending layoffs caused by offshoring of work. Opposition from the UCSF Faculty Association and University of California Student Association has also fallen on deaf ears.

"It is clear from the broad opposition within the UC community, Congress, and the public that offshoring good California jobs is counter-intuitive to the mission of the university and betrays taxpayer trust," said Keith Pavlik, a UCSF employee and member of University Professional Technical Employees-CWA Local 9119, who spoke at the board's January meeting.

Last summer, the UC system partnered with HCL, a multinational contractor headquartered in India, to manage IT infrastructure and networking-related services. The contract covers all 10 UC campuses, potentially endangering thousands of IT jobs, but the San Francisco campus is the guinea pig to test this cost-cutting scheme. It is the first time a public university has ever offshored American IT jobs.

Since then, HCL and UC have imported Indian workers to the university on H-1B visas, and are requiring soon-to-be-laid-off UC employees to train their replacements as a condition of their severance.

At Thursday's board meeting, workers called for more accountability from the university as a public institution that receives taxpayer funding. They also highlighted the fact that both UC San Diego Chancellor Pradeep Khosla and UC Berkeley Dean of Engineering S. Shankar Sastry sit on the board of HCL.

Union membership in 2016 declined by 0.4 percent – four-tenths of 1 percent – according to the Bureau of Labor Statistics. Not so surprising, when you look at the focused attack on workers' rights that has hurt private and public sector workers. Overall, 10.7 percent of workers, or 14.6 million workers, were union members. About 12 percent of workers are represented by unions.

The U.S. Chamber of Commerce has been plotting for four decades to get rid of unions and collective bargaining. Why? Because the union movement makes it possible for workers to improve their lives and fight back against corporate greed.

That's why we're seeing "right-to-work (for less)" campaigns and attacks on the right of public workers to have a union voice. If unions didn’t matter, corporate America would find something else to do.

We know workers still want unions. As tough as it can be, more than 20,000 workers joined CWA in the last two years. When working people are able to bargain for a better life, wages and standards rise across the board.