No matter who we voted for last November, none of us wants a cabinet filled with Wall Street billionaires or fast-food executives who prefer robots to human workers. That's why CWAers are mobilizing to Stop the Corporate Cabinet.

Over the next several weeks, and for as long as it takes, CWA locals are leafleting worksites at least one day a week about these nominees. CWA members are calling their Senators to tell them to oppose these crony capitalists.

This week, our focus is Secretary of Treasury pick Steve Mnuchin – a former Goldman Sachs banker who tried to foreclose on the home of a 90-year-old woman for a 27-cent payment mistake.

Call your Senators now at 1-866-692-1725. Tell them to block the corporate takeover of our government by opposing the nomination of Steve Mnuchin for Secretary of Treasury.

Mnuchin personally profited from families' losses during the Great Recession. At the height of the Wall Street debacle that caused the Great Recession, he purchased failed banks and savings and loans then moved to foreclose on tens of thousands of working and middle-class families and seniors.

For a presidential candidate who railed against Wall Street "getting away with murder," naming Mnuchin as Treasury Secretary is a slap in the face of millions of working families who will be victimized by this Wall Street-rigged economy.

Other picks that CWAers have been working to block include Commerce Secretary pick Wilbur Ross, a billionaire known as the "king of bankruptcy," who devastated communities by buying up companies and shipping jobs overseas; Secretary of Labor pick Andrew Puzder – CEO of fast-food conglomerate CKE Restaurants, who opposes minimum wages and overtime; and Tom Price for Secretary of Health and Human Services, who has a radical plan to destroy Medicare and force seniors to rely on private insurance. 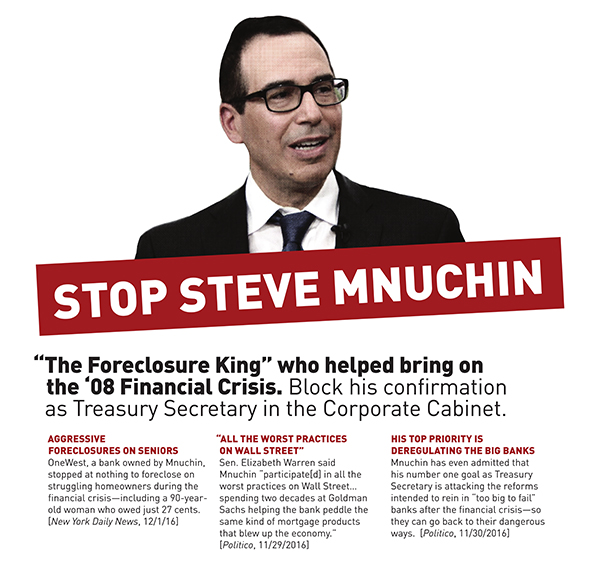 Workers at PAE Aviation, a government service contractor responsible for performing all aspects of aircraft organizational maintenance on the F-5 adversary program at Naval Air Station Key West, voted for representation with CWA.

Baggage encoders employed by ASIG at the Orlando International Airport voted overwhelmingly to join CWA. The unit will represent more than 70 workers.

Members of IUE-CWA Local 38761 have ratified a four-year contract with Qingdao Haier Co. at Appliance Park in Louisville, Ky. The contract covers about 4,000 workers.

More than 500 CWAers will meet at CWA headquarters on Saturday, Jan. 21, and then march together, joining tens of thousands of other activists participating in the Women's March on Washington.

CWA President Chris Shelton and Secretary Treasurer Sara Steffens will meet with CWAers before the event, around 8:30 am. Organizers expect a massive crowd at the rally and march.

Nine buses of CWAers are coming from Christianburg, Va.; Charlotte, NC; Newark and Trenton, NJ; and New York City. Other activists are driving, flying, and taking trains to join the rally.

CWA is a leading sponsor of the action, which encourages women and supporters to stand together for "the protection of our rights, our safety and our vibrant and diverse communities."

If Machines Can't Eat It, They Shouldn't Make It 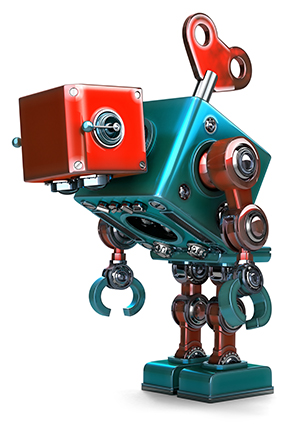 Secretary of Labor nominee Andrew Puzder, CEO of fast-food conglomerate CKE, has come out against overtime pay, against increasing the minimum wage, and for replacing workers with machines.

But one of Puzder's own companies, the fast food chain Carl's Jr., knows that this is ridiculous. Check out this advertisement by Carl's Jr. that concludes: "Machines can't eat it, machines shouldn't make it."

CWA Testifies About Need for OSHA Standard on Workplace Violence

The Occupational Safety and Health Administration held a hearing on Jan. 10 on the need for a federal OSHA standard to address workplace violence – a critical issue for social workers, nurses, and other health care workers. CWA and seven other unions had petitioned the Department of Labor to take action on the growing number of workplace assaults and injuries these workers endure.

CWA's Safety and Health Director Dave LeGrande testified, along with the AFL-CIO and other unions representing health care workers.

Fight Against Offshoring at UC Not Over

Members of University Professional and Technical Employees, CWA Local 9119, are standing strong against the University of California's plan to offshore IT jobs at the UC San Francisco campus to lower wage workers from India.

Currently, 79 IT workers will lose their jobs next month, but only after they train their foreign replacements as a condition of their severance.

Activists have been pushing back on the decision by UC President Janet Napolitano. Read the latest from the Los Angeles Times here and McClatchy News service here.