Locals are holding contract explanation sessions and will coordinate the ratification vote for members.

A nearly year-long campaign led by CWA has produced a big safety and health victory for AT&T technicians.

CWA District 9 staff – joined by CWAers in District 3, 4, 6 and the Telecommunications and Technologies sector – pressed AT&T to replace the 100 percent synthetic uniforms it required technicians to wear, among other unsafe conditions. CWA District 9 and Locals 9416 and 9431 filed complaints with the California Occupational Safety and Health Administration (Cal-OSHA), and following a comprehensive investigation, three serious citations and three general citations were issued on Dec. 5, regarding electrical safety, telecommunications safety and personal protective devices, and heat illness prevention.

The uniforms were considered a serious citation, and technicians now can wear other branded clothing and will not be required to wear synthetic shirts that are highly flammable.

U-Verse technicians who perform their work in close proximity to high and low voltage electrical energy are exposed to arc flashes that can ignite the clothing causing serious burns, injury, and possibly death to the technician. Cal-OSHA found that AT&T did not provide workers with proper tools to detect electrical current, nor did it have in place a plan to mitigate heat-related injuries. The agency levied $65,195 in penalties against AT&T.

Last Friday, D9 AT&T West members held actions in California and Nevada to focus public attention on how AT&T’s greed hurts customers, workers and communities. CWAers gathered on major highway overpasses and unfurled banners and signs calling for fairness at AT&T. CWA represents about 15,000 workers at AT&T West, and CWAers are mobilizing for a fair contract. 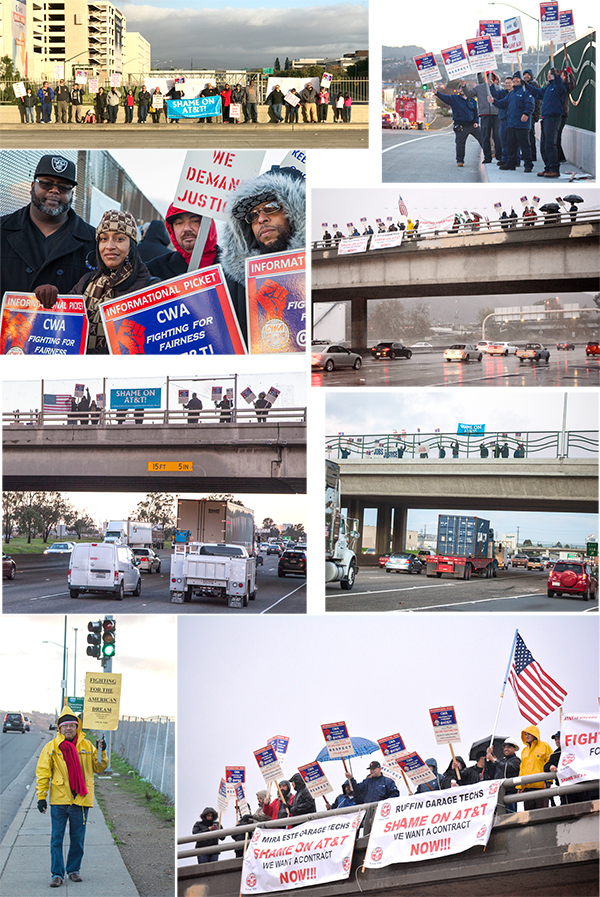 In a piece in the Las Vegas Sun, CWA President Chris Shelton took on Donald Trump's pick for Secretary of Labor, Andrew Puzder, for his troubling record on the issues that working people care most about:

Andrew Puzder, the CEO of CKE Restaurants, would be a fine choice to head a government agency responsible for looking out for millionaires. Instead, he's been tapped by President-elect Donald Trump to head the Labor Department, which for more than 100 years has been responsible "for promoting the welfare of wage earners, job seekers and retirees." 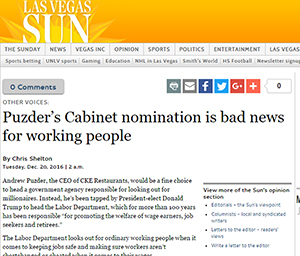 Puzder seems likely to turn all that upside down. According to his public statements, he opposes many of the policies and programs he would be responsible for administering. This is not what Trump voters wanted.

Puzder opposes the Labor Department's overtime rule and actually claimed that what workers "lose in overtime pay they gain in stature and sense of accomplishment" (Wall Street Journal, 3/25/14).

What does Puzder think about working people? Apparently he thinks they aren’t worth the bother and actually prefers machines. Puzder says that contrary to human workers, machines are "always polite, they always upsell, they never take a vacation, they never show up late, there’s never a slip-and-fall, or an age, sex or race discrimination case." (Fortune, 3/17/16).

On January 21, more than 300 CWAers will be a part of a huge demonstration and march in Washington, D.C., bringing together supporters from across the country to stand together for women's rights, safety, and families.

The Women's March on Washington is expected to draw over 200,000 women for a peaceful protest of the incoming administration. We will meet at the intersection of Independence Ave and Third St SW, near the U.S. Capitol, at 10:00am on January 21, 2017. 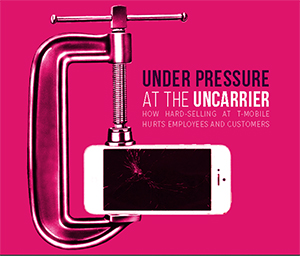 T-Mobile workers face tremendous pressure to meet unrealistic and punishing sales goals, forcing them to mislead customers and enroll them in unwanted services.

A new report titled "Under Pressure at the Uncarrier: How Hard-Selling at T-Mobile Hurts Employees and Customers," exposes a sales culture at T-Mobile US that is built on questionable sales tactics enforced by threats of discipline or loss of income. The report was produced by the Change to Win research group, which looks to expose corporate wrongdoing and strengthen consumer protections and workers' rights.

Sales metrics often change without warning and managers are constantly pushing employees to add more accessories, insurance, and lines to customers' bills. T-Mobile workers can even end up in nearly inescapable sales goal "debt" that gradually decreases their pay over time:

Workers report that they have been disciplined or made to attend sales "coaching" meetings on their days off for missing goals. One said, "If you don't meet your goals you get lower hours, and when you have less hours it becomes harder to meet your goals. It becomes a cycle hard to get out of."

As a result, 83 percent of T-Mobile salespeople said they felt pressure to add products and services that customers did not explicitly request.

The report confirms what many frontline workers have been saying as they build T-Mobile Workers United (TU), and join with their colleagues in CWA Local 6457. T-Mobile management is refusing to meet with TU to create a metrics system that works for consumers, the workers, and the company, and in fact has tried to create a "fake union" completely controlled by management.

The D.C. City Council passed a bill with a veto-proof majority to give new parents up to eight weeks' paid leave after the birth or adoption of child. The legislation would provide D.C. workers up to six weeks' paid leave to care for a family member, and two weeks for self-care in the event of a serious personal health condition. CWAers from Local 2336 worked hard along with allies to pass the bill, which is considered to be the nation’s most progressive paid family and medical leave insurance bill.

AFA-CWA this week urged the flying public to tell the President to block Norwegian Air International's (NAI) foreign air carrier permit. The Department of Transportation on December 2, 2016, approved NAI's bid to fly to the U.S., setting a dangerous precedent that risks hundreds of thousands of U.S. aviation jobs.

"Passengers need to know how the NAI decision will impact their communities and the oversight of the regulations and trained professionals who keep them safe," said Sara Nelson, international president of AFA-CWA. "Aviation was born in the U.S. and built faithfully by the workers who make our airlines fly. Flight Attendants and hundreds of thousands of workers have fought for the highest standards of aviation safety and security. These good people and thousands of good U.S. jobs are at risk with this decision."

The NAI decision sets up a "flag of convenience" model in aviation, the first step to outsourcing U.S. aviation jobs. It fails to uphold the labor protections of the U.S.-EU Open Skies Agreement.