The California Public Utility Commission is voting today on requiring AT&T and other telephone companies to provide more real-time reports on service outages. CWA D9 activists have been mobilizing and attending PUC hearings to spotlight the serious problems faced by rural residents and others who frequently lose access to 911 and emergency services.

In a letter to Commissioners sent in advance of today's vote, CWA District 9 Vice President Tom Runnion urged the PUC to implement the outage reporting requirements.

"We cannot continue to allow companies like AT&T to put their profits ahead of people's safety, and the CPUC's proposed move to require emergency and regular reporting on these problems is a critical first step to addressing the outages themselves. Californians statewide thank the CPUC commissioners for their leadership in protecting families from neglectful practices of AT&T," Runnion said.

CWAers in D9 are fighting back against AT&T's shipping thousands of jobs to India, Mexico, the Philippines, Jamaica, and other countries. Meanwhile, some premises technicians are forced to work overtime hours with no advance notice, for days or weeks at a time. AT&T also wants to shift more health care costs to workers and their families.

CWAers at AT&T West are standing together, calling on AT&T to get serious about bargaining a fair contract.

Bargaining opened this week covering 2,200 DIRECTV CWA members in District 9. In his opening remarks, CWA D9 Vice President Tom Runnion reminded the management team that AT&T has been posting big profits and is rewarding investors with an annual dividend this year that's more than double the average yield of all Standard & Poor companies.

While "that's all great news," Runnion said, workers need to share in those profits. "The DIRECTV workers who are called on to serve all those new customers need to be recognized for their skill and rewarded for their hard work." 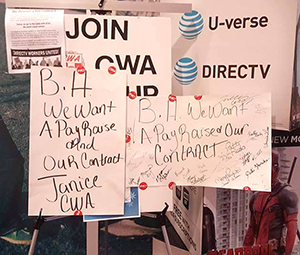 CWAers at a DIRECTV call center in Huntington, WV, are mobilizing for fair scheduling, good wages and benefits, and job security.

CWA Customer Care and Commercial Retention members mobilized across the five CWA-represented call centers last week, telling managers, "All we want for Christmas is a contract, a pay raise, and good health care." The 2,500 call center members are united, calling for fair scheduling, good wages and benefits and job security.

Keep up with the latest here and on Facebook.

Members of IUE-CWA Locals 81359 and 81380 in Waterford, N.Y., have been on strike at Momentive Performance Materials since November 2. This video tells the story of their fight for fairness against corporate greed.

CWA has enthusiastically endorsed Phil Murphy, former United States Ambassador to Germany and a progressive, for New Jersey Governor in the Democratic Primary. According to CWA Locals and members, Murphy is the best candidate – because he shares their progressive values and fights for New Jersey's middle-class and working families. The New Jersey gubernatorial election is next year.

"After eight years of New Jersey going backwards and staring down the barrel of President Trump, we need leaders who will look out for working families now more than ever," said Dennis Trainor, CWA District 1 Vice-President. "Phil Murphy is not beholden to the political bosses, and he'll make New Jersey a leader in the fight for economic and social justice. Most of all, we share Phil Murphy’s progressive agenda – when it comes to jobs, services, fully-funded pensions and a healthy respect for all this state’s families."

"This campaign is about bringing strong, progressive leadership to rebuild New Jersey's battered middle class with an economy that works for all of us." said Murphy. "CWA has been at the forefront in the fight for the progressive values we share, from better wages and workplace protections to a government that lives up to its promises and works for the people. We have built a broad coalition committed to reversing the damage Chris Christie has done and I am honored to have CWA join our fight for a fair and just New Jersey."

CWA Locals unanimously supported Phil Murphy via a fair, transparent, democratic process and substantive vetting by elected Local Presidents, the chairs of Legislative Political Action Teams, and then a review by the District 1 Vice President. CWA members appreciated how Phil Murphy is organizing his vision around a working families agenda. 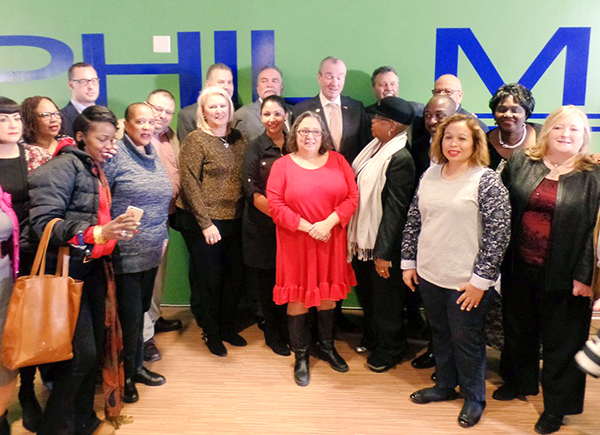 Wall Street Insiders Have Inside Track in Government

Despite promising to "drain the swamp," President-elect Donald Trump has begun filling his Administration with super-wealthy Wall Street executives from Goldman Sachs and Wells Fargo. Here's just a sampling of some of Trump's picks so far:

Labor Secretary: Fast food magnate Andrew Puzder, who opposes the Department of Labor's overtime rule and actually claimed that what workers "lose in overtime pay they gain in stature and sense of accomplishment." Puzder rejects increasing the minimum wage and says he prefers automated machines over human workers.

Treasury Secretary: Steve Mnuchin, a former Goldman Sachs banker who profited from the housing meltdown. Mnuchin personally profited from families' losses during the Great Recession by foreclosing on tens of thousands of working and middle-class families. He has already proclaimed that cutting corporate taxes will be his number one priority as Treasury Secretary.

Secretary of Health and Human Services: Rep. Tom Price, who has led the charge to privatize Medicare, which would seriously jeopardize the lives of millions of Americans and particularly harm seniors.

Secretary of Transportation: Elaine Chao, who made $1.2 million while overseeing Wells Fargo as the bank faced record fines for creating millions of fraudulent bank accounts.

Secretary of Commerce: Wilbur Ross, a billionaire known as the "king of bankruptcy," who supports gigantic corporate tax cuts.

Secretary of Education: Billionaire Betsy DeVos, who has led the charge to turn over Michigan’s schools to for-profit corporations.

CWA's national campaign to fight back against Wall Street greed is heating up. Join the campaign and take action at http://takeonwallstreet.org.

AFA-CWA President Sara Nelson released the following statement on last week's proposed rulemaking from the Department of Transportation's on Notification of Voice Calls on Aircraft.

"The American public does not want voice communication in flight. Anything short of banning voice calls is reckless. It threatens aviation security and increases the likelihood of conflict in the skies. It threatens safety for crews and passengers. AFA will continue to press for a complete ban of in-flight voice calls. No calls on planes. Period."

On Dec 1, a NJ appeals court rightfully rejected Governor Christie's far-reaching changes to the state's promotion process for certain state employees. The NJ Civil Service Commission had implemented a job-banding rule which grouped a series of job titles into one "band." This allowed management to freely appoint and promote workers from lower to higher titles in these bands and eliminated long-standing requirements for civil service tests and veterans preference.

The ruling by the court comes after two-and-a-half years of hard work by CWA and restores the taxpayer protections that ensure public jobs are not based on political connections and favoritism, but merit and fitness.

"For over a century, the Civil Service System has been based on the idea that people are appointed and promoted based on a system of objectively-determined merit and fitness. From his first day in office, Governor Christie has been obsessed with dismantling this fair, transparent system which protects the public from patronage and discrimination," said CWA NJ Area Director Hetty Rosenstein. "So, I am extremely heartened that the Court repudiated Christie’s sneaky scheme to dismantle civil service by ignoring the will of the people, the legislature, the law and our system of checks and balances."

CWA Local 7901 was part of a diverse coalition of more than 30 groups that worked to pass a public financing measure in Portland, OR, that would use public funds to match each one dollar contributed to an election campaign – up to $50 – with $6 in public money. This program rewards candidates who garner smaller donations from several individuals rather than bigger donations from fewer individuals. The measure passed in Portland City Council 3-2.