"We are one industry" was the message as CWA members came together in San Antonio, Tex., for the Wireless Worker conference. The session included CWAers from AT&T Mobility, Verizon and Verizon Wireless, T-Mobile, DIRECTV, Cricket and others. Together, participants talked about how they're taking on the challenges facing workers and how we can fight back.

The 300 participants strategized about organizing in the wireless industry to build power, and panels of workers from different companies talked about their work to build our union and bargain good contracts.

"The wireless industry is the future," CWA President Chris Shelton said. He called organizing Verizon Wireless workers a major CWA priority, because to bargain good contracts, we must build a strong union presence in wireless.

A panel of Verizon and Verizon Wireless workers talked about the 49-day strike that produced the first ever Verizon Wireless retail store contracts. T-Mobile Workers United members outlined the latest in the campaign to grow their union at T-Mobile US. Joining them were representatives from ver.di, the German union that represents T-Mobile workers and has supported the fight by U.S. workers for a voice on the job.

Stella Morales, a Cricket wireless worker, talked about the value of a CWA contract, telling participants that before Cricket workers had CWA representation, they received no raises. After getting their union voice, in less than two years workers were earning $3.72 per hour more.

CWAers walked the walk with actions outside a Verizon Wireless store and an AT&T Mobility "authorized dealer." CWA District 1 Vice President Dennis Trainor criticized AT&T for cutting union workers and corporate stores while sending jobs to resellers. He said AT&T Mobility workers, who will be bargaining a new "orange" contract early next year, are going into negotiations with a clear message for AT&T: "We want good jobs in our communities and in this country. We want jobs at AT&T."

Outside the Verizon store, wireless workers called out Verizon Wireless for union busting and for sending good jobs to the Philippines and other countries. 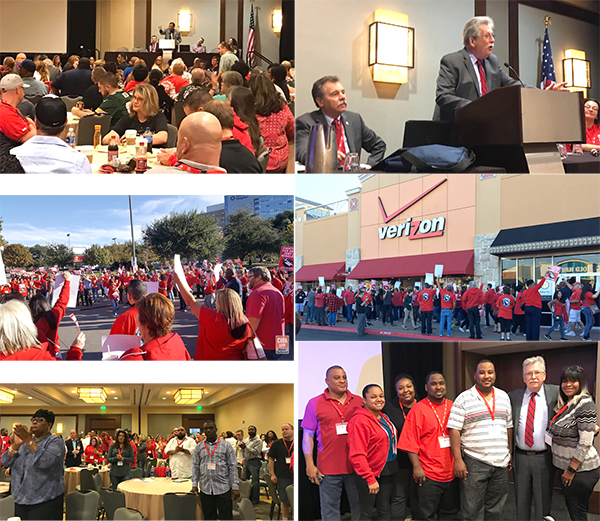 CWAers gathered in San Antonio for the Wireless Worker Conference.

Envoy Air passenger service agents rallied at major airports in Chicago, Cleveland, Detroit, Los Angeles, and Houston on the Fight for $15 National Day of Action – which spanned more than 340 cities – on Tuesday. The agents, CWA members, are currently negotiating their first contract with Envoy.

Most Envoy agents make less than $12 an hour. Many of the employees work more than 60 hours per week, work two or more jobs, and qualify for public assistance despite working full-time for a successful company.

Marie Gage, an Envoy passenger service agent, said at the Chicago rally, "Contractors as a staple for corporate America are driving everybody's wages down. This shouldn't be our future." Other Envoy agents speaking at the events included Bridgett Townsend (Detroit), Mary Wallace (Houston), and Mishika Stewart (Cleveland).

Agents face constant pressure for on-time performance. The work is physically demanding and stressful, but Envoy passenger service agents are proud to help passengers get to their destination safely and securely. At the events, the agents stood with other airport workers fighting for fair pay, as they all contribute to the industry and deserve at least $15 an hour and union representation. 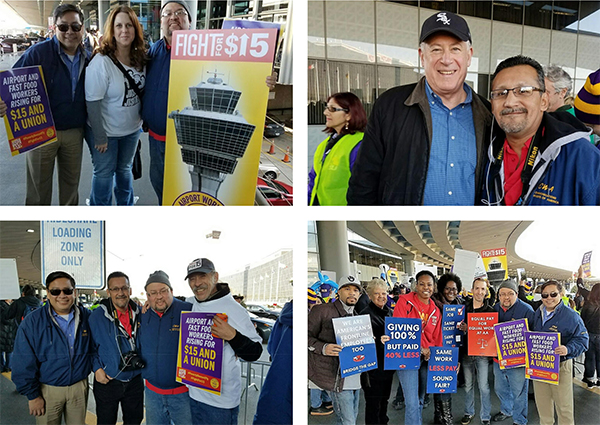 CWA & NABET-CWA were well represented at the rally at O'Hare with SEIU and Fight for 15, in which more than a thousand airport workers joined labor activists in fighting for a living wage. CWAers including Dan Moreno, NABET-CWA Local 54041; D4 Staff Rep. Clinton Rodgers, and D4 Organizing Activist Tim Case were joined by former Illinois Governor Pat Quinn, Jorge Mujica from ARISE Chicago, and Susan Hurley from Jobs with Justice. 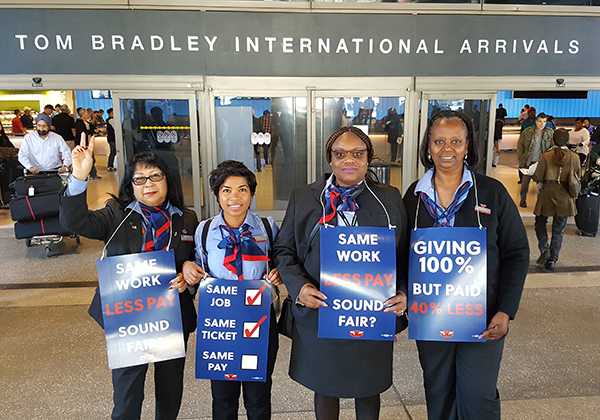 Bargaining for a first contract covering 2,500 DIRECTV customer care and commercial retention call center workers will get underway this month. CWA members at DIRECTV want good jobs and job security, fair scheduling, and justice on the jobs. Keep up with the latest here and on Facebook. 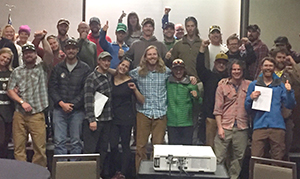 The two-year contract provides for a grievance and expedited arbitration procedure to work out disputes; just cause in disciplinary actions; expanded educational and professional development opportunities; a joint safety committee; and a strengthened avalanche dog program, among other issues. It covers about 200 patrollers from the Park City and Canyons Village base areas, and the newly formed Mountain Safety group.

Following is a statement by CWA President Chris Shelton on the announcement that Hedge Fund CEO Steven Mnuchin has been tapped for Treasury Secretary by President-elect Donald Trump:

Donald Trump's campaign pledge to "drain the swamp" and rein in Wall Street apparently lasted for only a few days after he was elected president. It’s difficult to think of a nominee who better embodies the culture of Wall Street greed than longtime Goldman Sachs partner Steven Mnuchin.

Mnuchin has personally profited from families' losses during the Great Recession. At the height of the Wall Street debacle that caused the Great Recession, he purchased failed banks and savings and loans then moved to foreclose on tens of thousands of working and middle-class families.

Mnuchin has already proclaimed that cutting corporate taxes will be his number one priority as Treasury Secretary, which tells you all you need to know on whether he is looking to serve regular Americans or corporate special interests.

For a presidential candidate who railed against Wall Street "getting away with murder," naming Mnuchin as Treasury Secretary is a slap in the face of millions of working families who will be victimized by this Wall Street-rigged economy.

Flight Attendants Rally to Save Social Security and Medicare

"Cathay Pacific Airways has a moral obligation to keep its promise to employees they chose to hire in the U.S. Their foreign company scheme to deny U.S. worker rights sets a dangerous precedent and threatens our families and communities. Cathay Pacific must reverse course and play by the rules. It is unacceptable for Cathay Pacific to try to increase corporate profits on the backs of U.S. workers," said Sara Nelson, AFA International President. 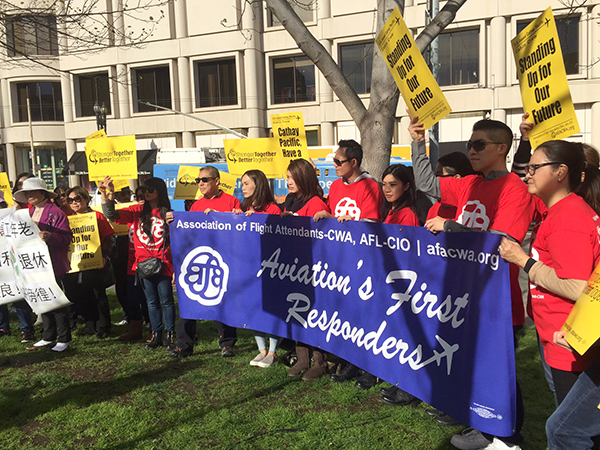 Show your union colors by shopping at the new CWA e-store.

Check out t-shirts, sweatshirts, polos, tote bags and more at www.myunionstore.com/cwa. All products are union-made in the USA, and new items will be added to the e-store regularly. Stay tuned! 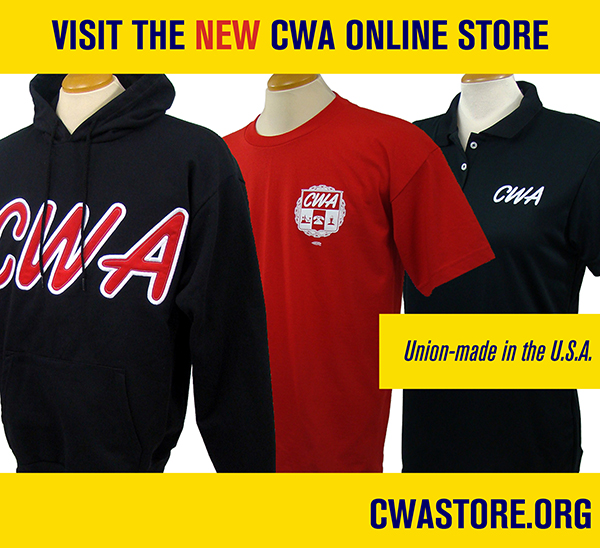 Housing with a Heart 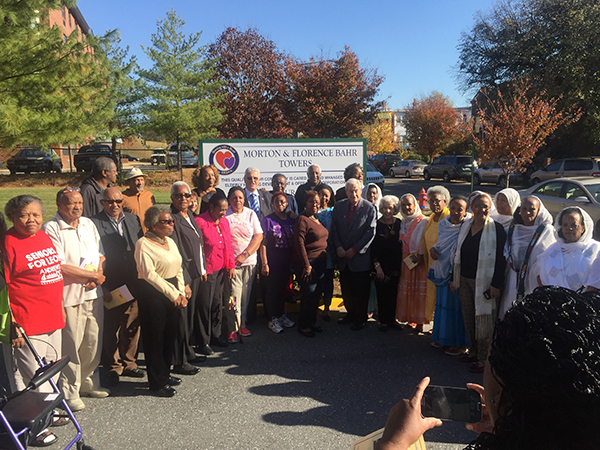 Morton Bahr, CWA president emeritus, and wife Florence, attend the naming of the Morton and Florence Bahr Towers, a residence for seniors in Washington, D.C. The project was sponsored by the Elderly Housing Development and Operations Corporation, which develops and manages safe, secure and affordable housing for senior citizens across the U.S. Bahr now serves as the group's chairman emeritus. Read more here.