After five years of grassroots activism, including protests in nearly every state, lobbying members of Congress on Capitol Hill and in home districts, and generating tens of thousands of calls, emails and letters, CWA activists and our broad coalition defeated the Trans-Pacific Partnership trade deal.

Many economists, pundits, and congressional voices said we couldn’t do it, especially after Fast-Track Authority was passed. Our historic campaign proved them wrong.

CWA made the TPP a major issue in the 2016 presidential election campaign, with both candidates declaring their opposition to the deal. This long effort to defeat the TPP shows us that when we mobilize and join with allies we can win, and we can ensure that the needs and interests of working families are addressed. Defeating the TPP will help keep good jobs here in the U.S., keep our food safe, ensure that the laws we support, like "Buy American" and others, remain in force, and remove the threat that international tribunals can overturn the will of the people.

CWA President Chris Shelton said, "For more than five years, CWA members, allies, and working families mobilized to expose this corporate-friendly, job-killing trade deal and the serious consequences for working families and communities if it was put in place. Our members long have been ahead of Washington on the issue of the TPP and fair trade, and our work built a strong base of voters who rejected what they clearly recognized as a bad deal, no matter their political party."

"The very same forces that lined up to pass the TPP will not rest, however, and we should consider everything we have done as good practice for the next four years. We are ready to fight."

It was former CWA President Larry Cohen who pushed the labor movement to fight the TPP, and who built the diverse coalition that stood against the deal. That led to the historic ban adopted by all AFL-CIO unions on political contributions to candidates who supported Fast-Track for the trade deal.

Cohen was convinced that every meeting with a Member of Congress and every event needed the participation of workers, environmental activists, people of faith, community and civil rights leaders, everyone who had a stake in making sure that the TPP didn’t pass. CWA activists reported that this made a big difference, especially in meetings with senators and representatives who realized that they faced united opposition to the deal.

The significance of this victory is huge. This is one of the few times that a trade deal sought by multinational corporations, the U.S. Chamber of Commerce, and the President and key administration trade officials has been defeated.

On Capitol Hill, Representative Rosa DeLauro (D-Conn.), who led the fight in Congress against the TPP, and other Democratic Members of Congress held a news conference, stressing that the defeat of TPP marked “the end of an era for trade agreements that are drafted hidden from the public view.”

"Together, a strong coalition of Members of Congress and labor, environmental, faith, and human rights organizations and activists worked diligently to stop this agreement. The TPP meant more power for corporations and fewer good jobs and lower wages for American workers. Since it was signed in February, it could not garner a majority of support in the U.S. House of Representatives," DeLauro said, adding, "TPP was on the ropes long before last Tuesday." 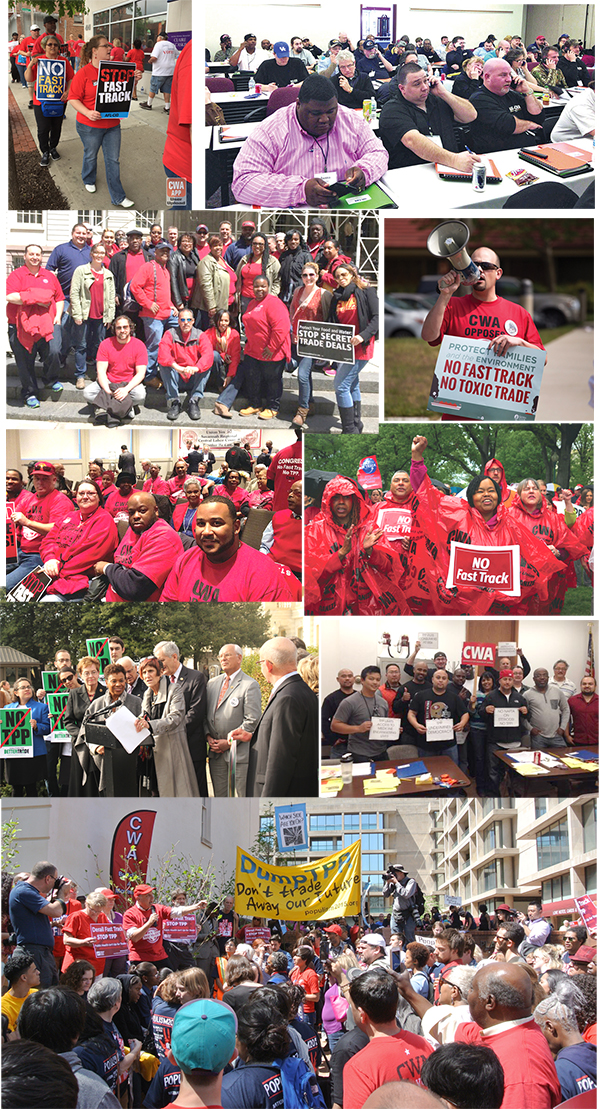 For more than five years, CWA activists and allies fought back against the TPP trade deal that threatened our jobs, our paychecks, and our communities. We lobbied our representatives, demonstrated outside the trade ministers' negotiating sessions, marched on Capitol Hill, and jammed the phone lines of Members of Congress, telling them to reject this corporate giveaway.

Congressional allies led by Rep. Rosa DeLauro stood with us and built support among their colleagues to stop this bad deal.

We're ready for whatever comes next.

Information technology employees at the University of California, San Francisco, confronted members of the UC Board of Regents over a plan to offshore their jobs to lower-wage workers from India. This is just the beginning of an offshoring scheme that could affect hundreds of IT workers in a public university system that receives taxpayer funding.

"The day I received a bill for my daughter's education at UC is the same day I received a layoff notice from UC. My daughter asked me, 'Dad, should I continue my engineering education?' I didn't know how to respond to my daughter or any other kids who are pursuing STEM degrees," said Hank Nguyen, who spoke at the Board of Regents' meeting today.

In February, Nguyen and 78 of his coworkers in UCSF's IT department will lose their jobs, but only after they train their foreign replacements as a condition of their severance. Members of UPTE-CWA Local 9119 have been mobilizing against the move for several months, building public support for the IT workers. 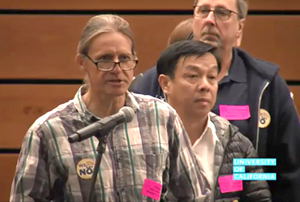 UPTE/CWA Local 9119 President Jelger Kamijn tells the UC Board of Regents to stop the offshoring of good tech jobs. With him are UCSF workers Hank Nguyen and Keith Pavlik who also addressed the Board.

At the meeting, UPTE-CWA Local 9119 President Jelger Kalmijn said, "We're not going to participate in a race-to-the-bottom, where working people are fighting each other all across the world to see who can be exploited the most. I urge you to take leadership and stop this outrageous outsourcing. It’s going to save you a couple pennies for massive political cost, for massive financial costs in the long run and for massive security costs. It makes absolutely no sense."

Some Indian workers are being brought to campus on H-1B visas, which are temporary work permits for specialty occupations requiring highly specialized knowledge. Congress originally created the visa program to help employers to fill talent gaps in their workforces — not displace U.S. workers. But the law has loopholes and employers like UC are unscrupulously exploiting them.

In September, UC awarded HCL, a staffing company based in India, a $50 million contract to manage IT infrastructure and networking-related services. Soon outsourcing could spread beyond UCSF, as the HCL contract can be utilized by any of the 10 campuses in the UC system.

Troublingly, both UC San Diego Chancellor Pradeep Khosla and UC Berkeley Dean of Engineering S. Shankar Sastry sit on the board of HCL.

"Congress did not design the program to replace — or outsource — American jobs, or to lower domestic wages," House Minority Leader Nancy Pelosi (D-Calif.) recently wrote in a letter to UC President Janet Napolitano. "Using the H-1B visa program for these purposes runs contrary to Congress' original intent, particularly given that the employees subject to the layoffs are highly skilled."

"UC follows in the footsteps of many private companies that have been abusing the H-1B visa program, including Southern California Edison, Abbott Laboratories, Eversource Energy, Walt Disney World, Toys "R" Us and New York Life. But as a public institution, the University of California's action is even more of a slap in the face to the tech workers, their families and the UC community," Kalmijn said. "We will continue to fight back against this shameful attack on good, family-supporting jobs."

CWAers joined U.S. Senator Bernie Sanders and many labor, environmental, healthcare, consumer, and other activists at a rally in Washington, DC, to mobilize for economic and social justice and equality as the incoming Trump administration takes office, and to celebrate the hard-fought win on defeating the TPP trade deal.

Sanders said, "On every important issue facing the American people – raising the minimum wage to a living wage, pay equity for women, rebuilding our crumbling infrastructure and creating millions of good paying jobs, or demanding that billionaires start paying their fair share of taxes – on all of those issues, the American people are behind us. And here is an issue where we have already succeeded. We have taken on corporate America and defeated the Trans-Pacific Partnership." 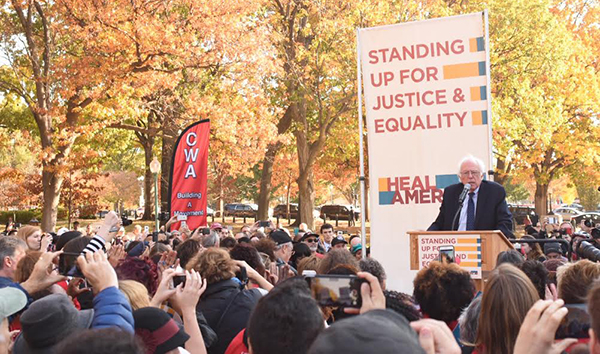 Senator Bernie Sanders at the rally for justice and equality on Capitol Hill. 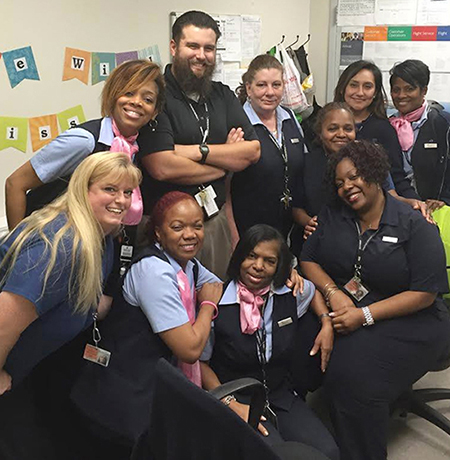 CWAers at Piedmont stand strong for a contract.

Nearly 100,000 automatically registered Oregonians cast ballots in the November election, accounting for 42 percent of the total ballots, an all-time record for turnout in the state.

The state's "Motor Voter" plan took effect in January 2016. People are automatically registered to vote when they obtain or renew a driver's license at the Department of Motor Vehicles.

Voter participation in the United States trails nearly every other democracy. Just under 50 percent of eligible voters cast ballots in the 2016 election. Automatic voter registration is a way to improve turnout by enabling more people to register to vote.

Kevin Voracek, a member of CWA Local 7203 in Rochester, MN, has been elected mayor of the City of Faribault, MN. Voracek has served on the City Council since 2009.

Hedge Fund CEO Steven Mnuchin has been recommended for U.S. Treasury Secretary by Trump transition advisors. It's difficult to think of a nominee who better embodies the culture of Wall Street greed than the longtime former Goldman Sachs partner.

Part of the "bilionaires' club of private financiers," according to the Los Angeles Times, Mnuchin, at the height of the Wall Street debacle that caused the Great Recession, purchased failed banks and savings and loans then moved to foreclose on tens of thousands of families, seniors and communities of color. Those families' losses were Mnuchin’s personal gain.

Naming Mnuchin as Treasury Secretary would be a slap in the face of millions of working families who will be victimized by the Wall Street-rigged economy.

Dodd-Frank legislation that created the Consumer Financial Protection Bureau, a crucial financial watchdog agency, is under attack by Republicans. The CFPB recently cracked down on Wells Fargo executives for forcing employees to create millions of fake accounts, handing the bank a record $100 million fine and resulting in the resignation of their CEO, John Stumpf.

The CFPB also has been taking on mortgage companies and big banks that cheated homeowners and carried out illegal foreclosures following the 2008 Great Recession, an economic disaster caused by the banking industry.

What You Can Do

CWA's national campaign to fight back against Wall Street greed is heating up, and activists and allies are pushing to close the "carried interest" loophole that allows hedge fund managers to pay a lower tax rate than other working Americans.

This tax break for the richest of the 1 percent means that working people – customer service workers, nurses, telecom technicians, our members – pay a much greater percentage of income in taxes that these Wall Street traders.

The campaign goals also include:

Join the campaign and take action at http://takeonwallstreet.org. 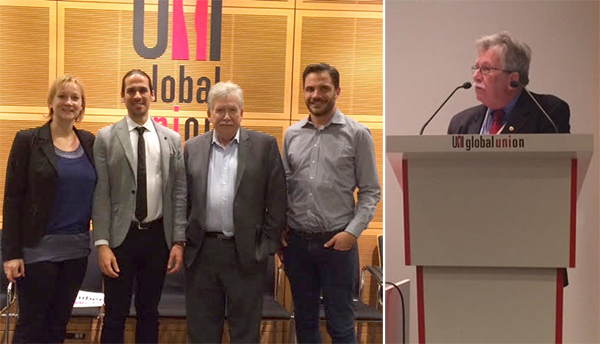 The Federal Communications Commission has dropped a proposal to change its Business Data Services rule in a way that would favor non-union companies like Sprint, T-Mobile and Verizon Wireless.

The FCC's proposal to cut rates for some elements of business data services would have had "a devastating impact on investment needed for broadband expansion, especially in rural areas," CWA told the Commission.

CWA has called for more investment in fiber and high speed broadband, not less, to expand access for all Americans and create good jobs.