IUE-CWA Members on Strike at Momentive

Members of IUE-CWA Locals 81359, 81380, and 84707 at Momentive Performance Materials in Waterford, N.Y and Willoughby, OH, have been forced to strike as they fight for a fair contract. About 700 IUE-CWAers work at the plants producing adhesives and sealants used in construction and the auto industry.

CWA members covered by the AT&T National Internet Contract ratified a three-year agreement by a wide voting margin. The agreement covers about 2,000 workers.

The agreements provide for health care coverage; disability, savings, and pension benefits; a grievance and arbitration process; coverage under the national transfer plan and other benefits.

More than 10,000 DirecTV workers, including technicians, customer service representatives, and administrative workers have joined CWA in the past year.

“Frontier must invest in its people to ensure the future success of our airline. Customer service and safety start with Flight Attendants. We are committed to achieving an agreement that recognizes our contributions as aviation’s first responders and that make Frontier Airlines a success,” said AFA-CWA Frontier President Angie Piller.

Negotiations began over a year ago. Frontier recently announced its plan to hire 800 flight attendants and 300 pilots by the end of next year in order to expand to new destinations. Even as the airline grows, the operation has been plagued by operational issues, stemming from its January 2015 decision to outsource thousands of jobs. The message is clear: Frontier must invest in its employees. 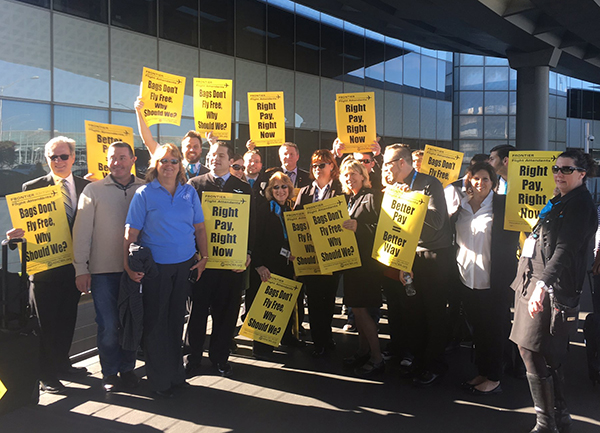 CWA Local 1170 now represents all employees working at the Department of Public Works in the Town of Canandaigua, NY. The unit is 17 people.

Senior Social Workers with the Delaware Department of Health & Social Services/ Division of Services for Aging and Adults with Physical Disabilities overwhelmingly voted for representation with CWA Local 13101 in Delaware.

When someone, especially a political candidate, says, “Believe me,” that’s the signal to take a close look at their record. That’s how we know Donald Trump doesn’t really care about bringing manufacturing jobs back to Pennsylvania. If he did, he wouldn’t have built his career on outsourcing millions of dollars of business to China, India, Mexico, and other countries.

Trump said on the campaign trail, “Pennsylvania steel and the incredible steel workers will send new skyscrapers into the clouds.” But according to a recent Newsweek investigation, Trump built his last two construction projects with Chinese-made steel instead of American steel, and hid the fact by creating a chain of offshore corporate holding companies.

Trump doesn’t only outsource building materials; he also has a long history of undercutting American workers by manufacturing most of the goods stamped with his name in other countries.

Morgan Carroll, candidate for US Congress in the 6th district in Colorado – which also includes the site of the center – attended the Denver action and pledged support for laws to protect American workers and to encourage what she termed “corporate patriotism” where American companies “repatriate jobs and invest in their American workforce.” Carroll is outspoken in her opposition to the TPP, a dangerous trade bill which could harm U.S. workers and the environment.

CWAers, along with Food & Water Watch, canvassed the neighborhoods where two of North Carolina's members of Congress who are uncommited to stopping the TPP, live. Activists placed over 400 anti-TPP door hangers. During the action, Congressman GK Butterfield committed for the first time publicly that he will vote NO if the TPP comes up during lame duck.

Congressman Butterfield committed to voting NO on the TPP trade deal.

Activists from CWA Local 7019 on the phones for Hillary Clinton in Phoenix, AZ. 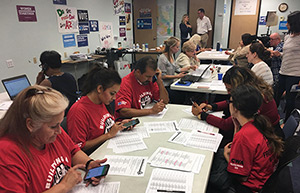 Rep. Raul Grijalva (D-AZ), center, joined CWAers at an evening phone bank. He liked CWA’s political revolution T-shirt so much, he asked for one of his own. With Grijalva is Fernando Roman, area vice president of CWA Local 7026, and Cecilia Valdez, secretary-treasurer, CWA Local 7026. 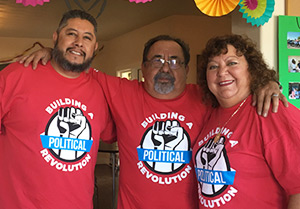 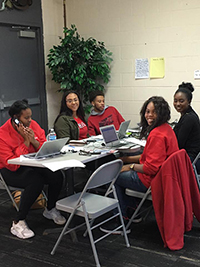 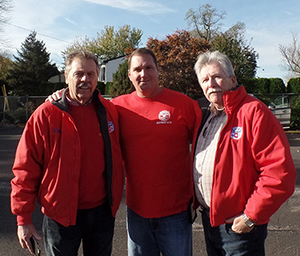 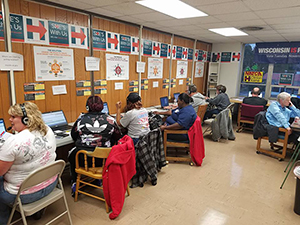 CWAers “text bank” for our union-endorsed candidates in North Carolina. Using a peer-to-peer mobile app called Hustle, members are carrying on hundreds of text conversations in a fraction of the time it would take to knock on doors or phone bank; in one recent evening, a handful of union members reached more than 36,000 voters in North Carolina.

CWA activists knock on doors in Bloomington and Maplewood, MN. 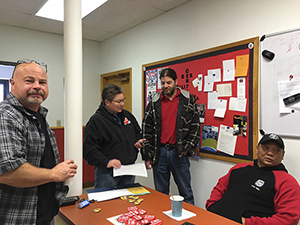 The National Coalition on Occupational Safety and Health (COSH) will hold its annual conference Dec. 6-8 at the Maritime Institute in Baltimore, MD. This national conference brings together safety and health activists from unions, other COSH groups, worker centers, and more. Attendees will learn about the latest safety and health developments; discuss initiatives taking root at the national, state, and local levels; and strategize about campaigns.