CWA Delivers More Than 7,000 Petitions to the FCC on Business Data Services Proposal

CWA delivered 7,184 petitions to the Federal Communications Commission from union and digital activists nationwide calling on the Commission to give careful review to proposals to regulate business data services, and to keep the priorities of broadband buildout and job creation front and center.

I oppose the FCC's plan to change Business Data Services rules to favor non-union companies like Sprint, T-Mobile and Verizon Wireless over telecom companies that invest billions in high-speed networks and employ union workers. These changes would make it more difficult for companies to make investments in the infrastructure rural areas need to build strong economies.

FCC Chairman Tom Wheeler's proposal to radically cut rates for some elements of business data services would have a devastating effect on investment needed for broadband expansion, especially in rural areas. It also would create pressure on companies to cut jobs, resulting in a decline of workers' living standards.

To meet the FCC's goal of broadband buildout, expanding access to high speed networks for all Americans, and creating good jobs, it's critical to have more, not less investment in fiber.

AFA-CWA, on behalf of Cathay Pacific Airways U.S.-based Cabin Crew, filed on Monday for a union representation election. Cathay Cabin Crew demonstrated overwhelming support for AFA with signed authorization cards asking for an election. Now they eagerly await the National Mediation Board (NMB) to call for an election.

"We are excited for Cathay U.S.-based Cabin Crew to join with us to raise the standards for all Flight Attendants. Their Cathay Cabin Crew counterparts in Hong Kong, the United Kingdom, and Canada all have contracts with higher pay, benefits and job security. It's past time for these hard-working American-based Flight Attendants to have a contract too. Together we will work to deny multi-national corporations from undervaluing our work. This election is about equality and fairness. It matters to Flight Attendants in the U.S. and Cabin Crew serving as aviation's first responders around the world that these Flight Attendants have a strong voice at work," said Sara Nelson, AFA-CWA International President.

Cathay Pacific employs approximately 450 cabin crew in the U.S. with bases in SFO, LAX, and JFK.

CWA President Chris Shelton set a strike date of Nov. 2, at noon, at Momentive Performance Materials in Waterford, N.Y. About 700 members of IUE-CWA Local 81359 at Momentive have been mobilizing for a fair contract, but Momentive has made even more extreme demands for cuts in benefits.

The IUE-CWA Momentive members voted to authorize a strike in late summer, and the CWA Executive Board also voted for the strike. 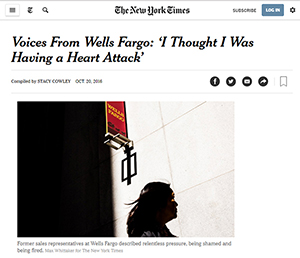 The Committee for Better Banks, a project of CWA, built momentum this week as more media outlets are talking about big banks' damaging workplace culture in the wake of the Wells Fargo scandal. The Committee is bringing together bank workers, community and consumer advocacy groups, and labor organizations to improve conditions in the banking industry.

Bloomberg BNA highlighted the work of CWA and the Committee for Better Banks.

Learn more about the coalition and get involved here.

The stakes have never been higher than this election, and women can't afford to elect Donald Trump as our president. Trump is a sexist who would set women back decades if elected.

Trump's views on women in the workplace would fit right in on Mad Men. Trump has said that "putting a wife to work is a very dangerous thing." He's said, "I don’t want to sound too much like a chauvinist — but when I come home and dinner's not ready, I go through the roof." He sounds like a chauvinist to me.

Trump thinks pregnancy is "an inconvenience," and that breastfeeding working mothers are "disgusting." He has no plan on making sure that women receive equal pay for equal work aside from saying, "You're gonna make the same if you do as good a job." Trump has criticized paid family leave, saying, "We have to keep our country very competitive, so you have to be careful of it."

Trump doesn't have a clue about the challenges of a working mother. He bragged about a childcare program for his employees, but fact-checking revealed that the program was actually only available to the children of his hotel and golf club guests — not his employees.

Trump's sexist behavior isn't limited to his incoherent, inadequate workplace policies. After the leak of a 2005 tape in which Trump lewdly bragged about kissing and groping women without their consent — saying that "when you're a star, they let you do it" — multiple women have come forward with horrific stories of how Trump grabbed them inappropriately. Competitors in the 1997 Miss Teen USA beauty pageant soon revealed that Trump walked into their dressing room while they were changing.

Trump enjoys evaluating women based on their appearance, calling women he dislikes "pigs," "dogs," and "slobs." Former Miss Universe Alicia Machado has revealed Trump's disgusting insults to her, calling her "Miss Piggy" as a criticism of her weight, and calling her "Miss Housekeeping" because she is Latina. And Trump is an equal opportunity misogynist. It doesn't matter if you're Latina, African-African, Asian or white. His contempt and sexism is consistent.

It's time for us to take a stand against Trump's sexism and hatred towards women. Hillary Clinton has been a lifelong advocate for women and for policies that help working people, and she'll make an excellent first female president of the United States. After 44 male presidents, it's long overdue.

Voters agree. Ohio used to be one of Trump's strongest battleground states. But Buckeye State women are expressing deep disgust for Trump's vulgarities, catapulting Clinton into the lead. Trump currently trails Clinton in Ohio by 9 points, and if Election Day ballots add up to anything near that new survey, Trump will lose in a landslide.

My union, the Communications Workers of America, is building on that momentum. I'm proud to lead a new union program, CWA Women for Political Power, to elect Hillary Clinton the nation's first female president. We'll be phone banking and rallying throughout Ohio, spotlighting the power of women workers to move the country forward on issues like fair pay and paid sick leave.

Together with the women and men of CWA, I will be working hard until Election Day to make sure our country rejects Donald Trump's toxic, sexist views. As women, we cannot afford to sit this election out.

Find out more and get involved in CWA Women for Political Power here.

CWAers joined members from the Hotel Employees and Restaurant Employees, the AFL-CIO, and many other labor groups to picket outside the Trump International Hotel in Washington, D.C., at its grand opening. 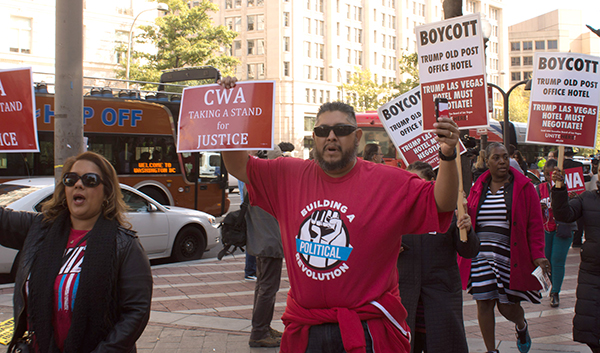 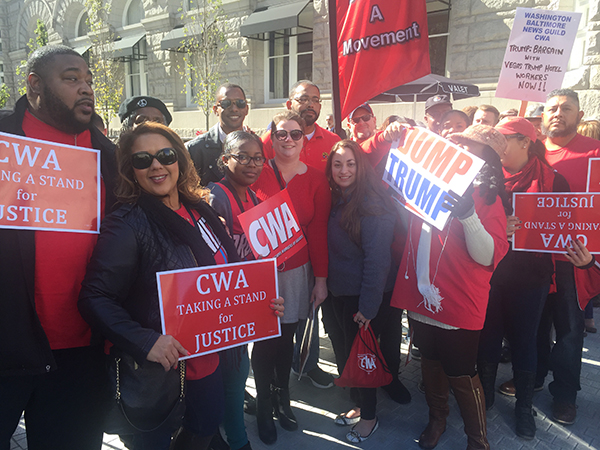 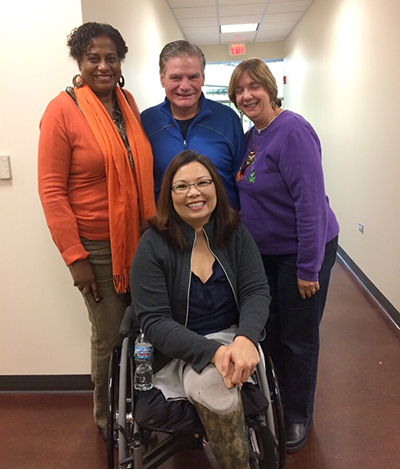 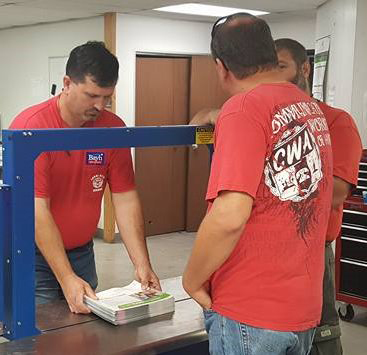 Check out this video of CWAers in Minnesota as they phone bank and walk neighborhoods for the Nov. 8 elections. 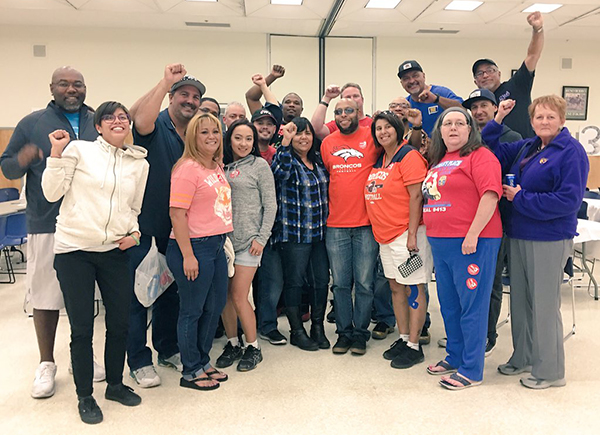 The News Observer highlighted CWA's election efforts in North Carolina and other states to contact about 2.4 million voters over the course of 4 weeks using an interactive text messaging program.

The News Observer said the innovative program "could ultimately revolutionize the ground wars in which the two major political parties aim to get the maximum number of voters to the polls, traditionally through costly phone banks, direct mail bombardments and door knocks." 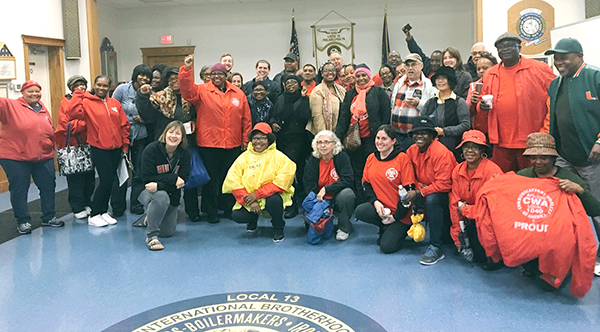 On the first day of early voting in Texas, Oct. 24, members of CWA Locals 6215 and 6150 led a rally of unions and community groups, reminding Dallas voters of the importance of early voting. More than 75 activists participated in the action. 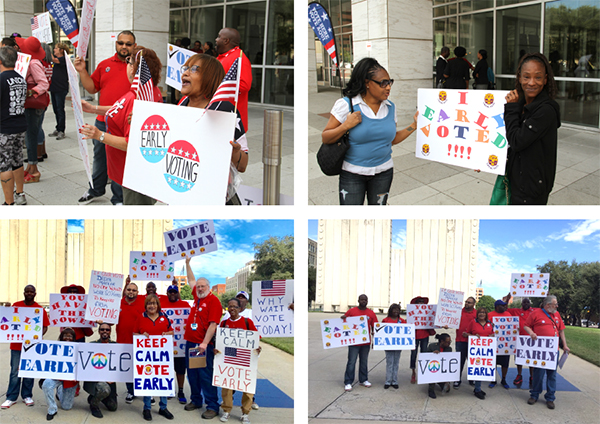 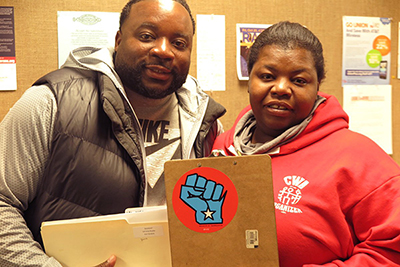 Sign up now for this year's CWA Wireless leadership conference, to be held in San Antonio, Tex., on Nov. 27-30. Learn more here.