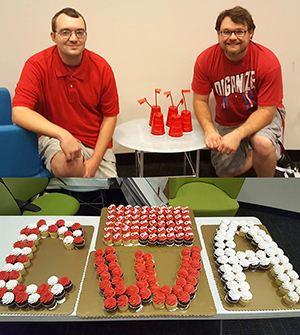 CWA members in Huntington, W. Va., show their solidarity on the National Day of Unity.

Negotiations with DirecTV covering 2,100 technicians, warehouse, and administrative workers in Districts 3, 4, and 6 opened on Sept. 12 in Austin, Tex.

"We are prepared to work as long as it takes to bring a decent and fair contract to our members," CWA bargainers said.

Negotiations begin Tuesday, Sept. 20, in New York City between NABET-CWA and ABC Inc., a subsidiary of the Walt Disney Co. CWA President Chris Shelton will join the NABET-CWA team at the opening session, along with NABET-CWA President Charlie Braico and members of the bargaining team. 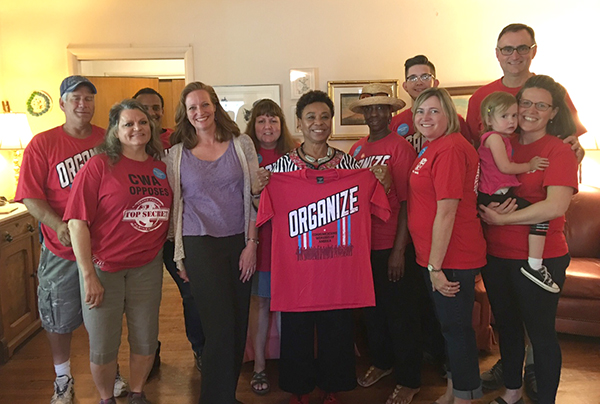 CWA members get ready to go door to door in Aurora, Colo., for Morgan Carroll, the CWA-endorsed candidate running for Congress in Colorado's 6th District. 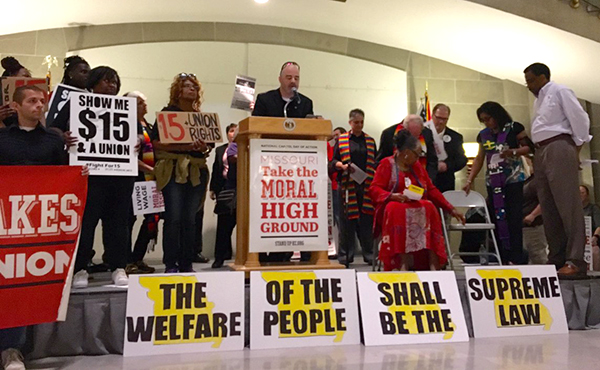 Building on the "Moral Monday" movement, Sept. 12 marked a "Moral Day of Action" in 30 state capitals across the country. During the Moral Day of Action in Missouri, CWA District 6 State Campaign Lead Billy Moffett says no one deserves to live in poverty.

CWA member Anthony Eramo won his primary for New York State Assembly District 20! As a full time field technician with Verizon, Anthony has also been a proud CWA member for the past two decades and currently serves as Chief Steward of CWA Local 1106. 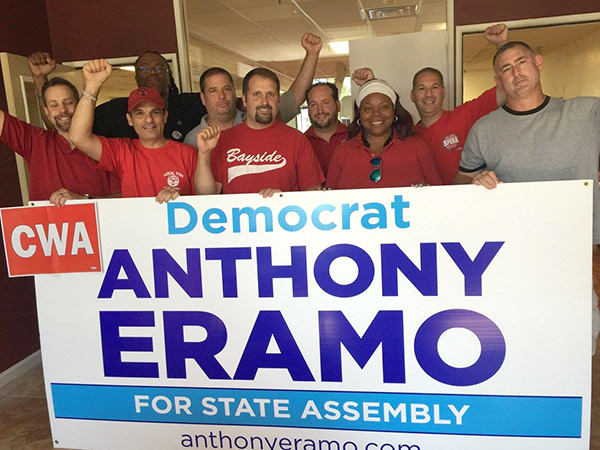 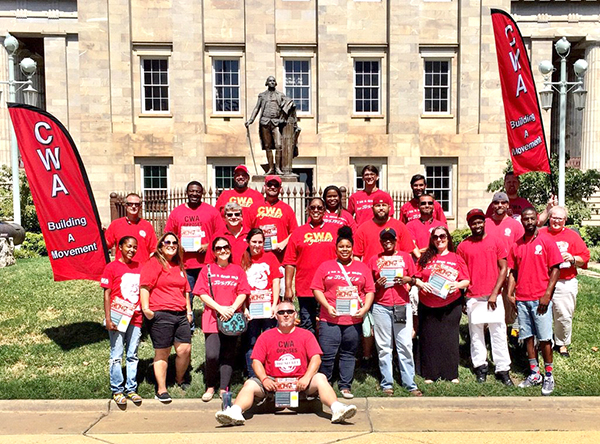 On the Moral Day of Action, CWA activists and allies stood up for workers' rights, voting rights, and human rights in North Carolina. 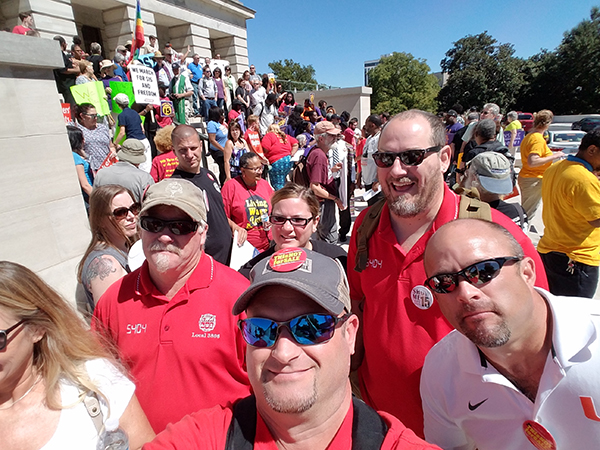 Members of CWA Locals 3806, 3808, United Campus Workers Local 3865, and TNG-CWA Local 36047 joined faith leaders, community advocates, and other allies on the steps of the Tennessee State Capitol to tell legislators to take the moral high ground and pay attention to the needs and interests of Tennessee citizens.

Check out this video from the AFL-CIO that contrasts Hillary Clinton and Donald Trump on issues important to working women.

Fighting for Our Safety and Health

CWAers gathered in Pittsburgh, Pa., this week for the 2016 Health, Safety, and Environment Conference.

Speaking to attendees, President Shelton commemorated the 10 CWA members lost this year. "This is a reminder of the work we need to do," he said. 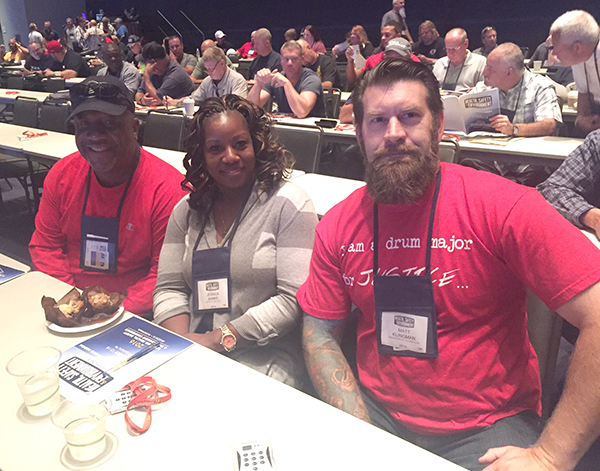 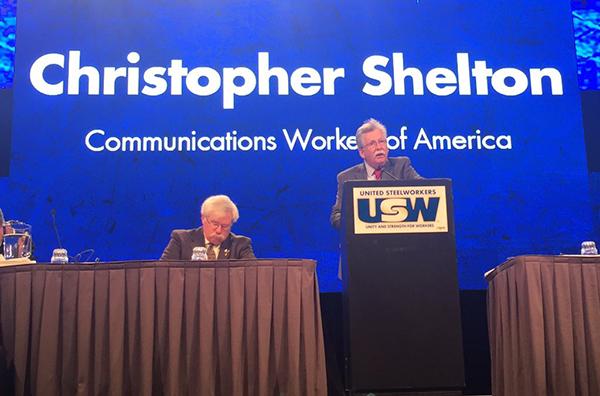 CWA President Chris Shelton's Labor Day op-ed on why unions are more necessary than ever appeared in Tulsa World and several other publications, including Newsday, the Las Vegas Sun, and the Wisconsin State Journal:

Take a good look when someone says "unions aren't needed anymore." Is it a representative of a think tank financed by Big Business? Some corporate executive whose place in the 1 percent is secure?

Working people know better. We know that the American Dream isn’t only for Wall Street bankers and the 1 percent. It’s for all of us who want to improve our standard of living and help our children and grandchildren have even better lives. Unions enable working people to make our workplaces safer and to negotiate just wages and working conditions. Unions are how working people can earn a good living and have a better life. 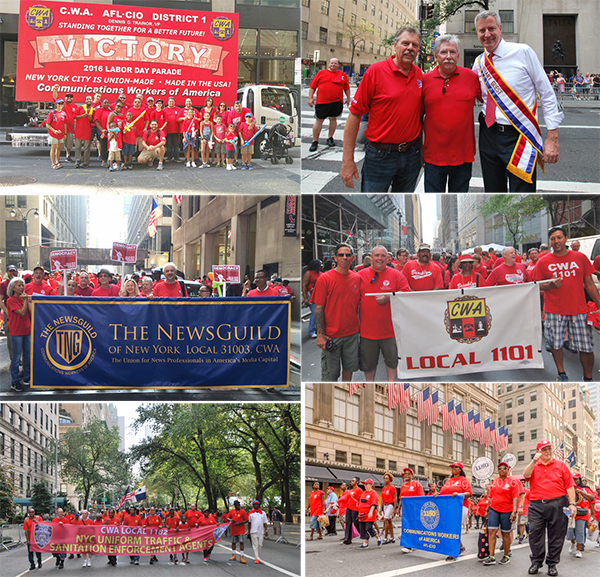 CWA activists participated in a Trans-Pacific Partnership (TPP) National Day of Action on Sept. 14, as Congress was flooded with phone calls urging them to oppose the TPP trade deal. CWAers generated nearly 3,000 calls.

Activists from more than 90 organizations, including CWA, the AFL-CIO and other unions, Sierra Club, Fight for the Future, and Citizens Trade Campaign joined in a day of phone calls and online actions reminding Members of Congress why they must reject any effort to pass the TPP, especially in a lame duck session of Congress after the November elections.

About 13 million people engaged in the day-long event, with calls made to every Member of Congress and social media messaging reaching more than 1.6 million people.

Over the past several weeks, at least 14 Members of Congress who previously supported "fast track" authority said they would not support the TPP. The 28 House Democrats who voted for fast track got special attention.

Hillary Clinton has expressed her strong opposition to the TPP both now and in a lame duck session.

"It’s time for the Obama administration to realize that a lame duck vote on this job-destroying trade deal is a losing issue," CWA said.

IUE-CWA members in Indiana generated hundreds of calls to Rep. Todd Young (R), who voted for "fast track" authority for the TPP trade deal and is running for the U.S. Senate.

Wells Fargo has been hit with a record $185 million fine by the Consumer Financial Protection Bureau for pressuring workers to meet extreme sales quotes and set up unauthorized bank and credit card accounts for customers.

The Committee for Better Banks – a coalition formed by CWA, bank workers, and other community and consumer advocates – has been working since 2013 to expose the predatory practices of banks like Wells Fargo and Santander and to spotlight the damaging working conditions that bank workers endure.

"The Wells Fargo sanctions are a long overdue victory for the frontline workers who have been standing together to fight Wells Fargo’s predatory sales practices in Los Angeles for years," said Khalid Taha, a member of the Committee for Better Banks. "At Wells Fargo, I faced the threat of being fired if I didn’t meet their unreasonable sales quotes every day. But sanctions on one bank are not enough – we need to crack down on the hostile work conditions and predatory sales metrics that hurt underpaid bank workers like me and our consumers alike."

Better Banks Los Angeles was launched this week, and already 1,700 people have signed the petition calling on the Los Angeles City Council to adopt a "responsible banking ordinance" to help end the predatory actions of banks that harm workers and consumers. Read more here.

Next week, the Senate Banking Committee will hold a hearing on Wells Fargo's illegal activities. CWA is reminding senators that low-wage bank workers are being forced by their employers to meet extreme sales goals or face termination, and that the problem of predatory banking starts at the top. 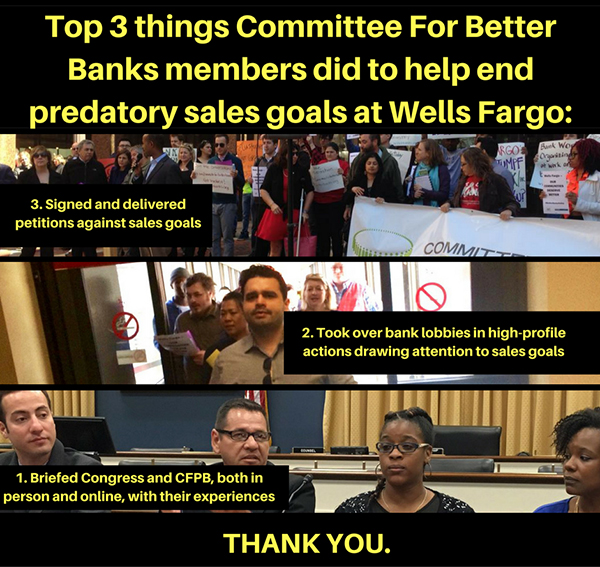 Following is a statement by the Communications Workers of America as our nation marked the 15th anniversary of the horrific attacks that senselessly took the lives of thousands of people on Sept. 11, 2001:

Thirty-two CWA, AFA-CWA, and NABET-CWA members lost their lives on September 11, 2001, on planes and on the ground at the World Trade Center, the Pentagon, and Shanksville, Pa. Other CWA members played a major role in responding to the attacks: telecom techs worked right at Ground Zero around the clock for many days to get communications up and running, health care members showed compassion and care to all who needed it, and public safety members were on the job keeping all of us safe.

Since 9/11, many more telecom workers, public sector workers, nurses, and NABET-CWA news crews have suffered long-term illnesses or have died as a result of their exposures to the toxic dust clouds generated that day.

It has taken nearly 15 years for Congress to approve the first round of funding for medical programs to help these victims. To get the long-term funding needed, we must overcome the Republican obstructionists who have blocked this life-saving care for those hurt on this horrible day.

CWA Legislative Boot Camp attendees, along with the San Antonio AFL-CIO, spent their Labor Day commemorating the 50th Anniversary of the Farm Workers Strike, which was a spark both in the Labor Movement and in the Chicano Civil Rights Movement. A large crowd packed the San Fernando Cathedral in San Antonio, Tex., following a march through the city to Milam Park. CWA Local 6143 Vice President Geronimo Guerra chaired the commemoration. 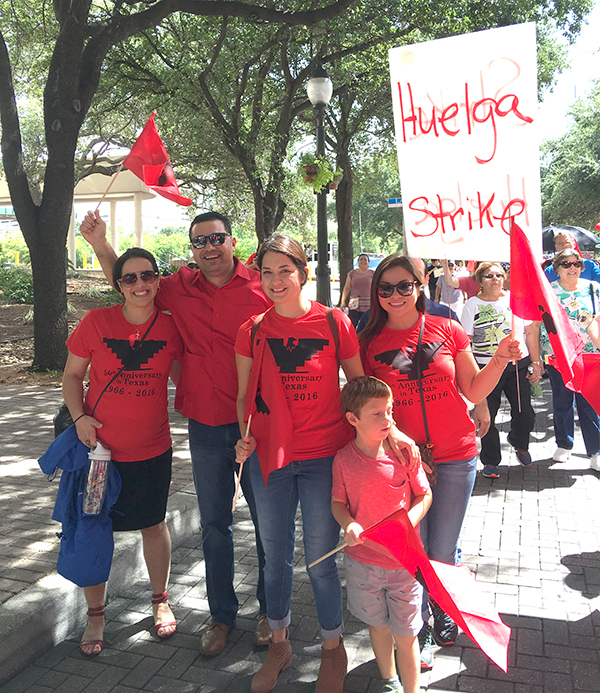