Members of CWA Locals 1133 and 1168 are now reviewing the proposed agreements. A ratification vote will be held in the next few weeks.

In August, CWA members and allies held a rally for safe staffing, respect, and reform at St. Joseph's Hospital.

Solidarity made all the difference at AT&T West this week, as CWAers stood strong in their resolve to engage in an unfair labor practice strike if the company tried to maintain its unilateral changes to the grievance process.

On Wednesday, AT&T West blinked and sent a message clarifying that the policy would not be changed.

Activists Tell Congress: Keep Your Promise to Mine Workers 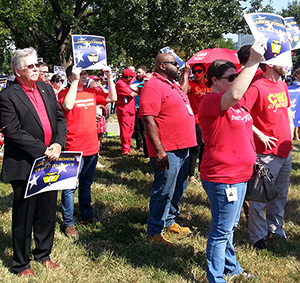 CWA President Chris Shelton and about 50 CWAers joined more than a thousand members of the United Mine Workers Union and other union activists at a Capitol Hill rally today, calling on Congress to keep America's promise to thousands of retired miners and spouses. Mine workers and supporters came from several states, traveling by bus from Kentucky, Illinois, Ohio, Pennsylvania, and more, to send a message to Congress: keep America's promise to us by funding the UMWA pension fund.

The crowd heard from a bipartisan group of lawmakers who pledged to fight hard for S. 1714 and H.R. 2403, calling the legislation "a matter of life and death for current and retired miners and their families."

After the rally, UMWA members and supporters visited every Senator and many Members of Congress, calling on them to stand up for the working families who stand with this country every day. The Senate Finance Committee is expected to vote on the bill on Sept. 14.

Seventy years ago, President Truman promised coal miners that they would have lifetime retirement benefits, in recognition of the very dangerous and too often deadly work that they do. Coal miners work in an extraordinarily challenging work environment, suffering much higher than normal rates of crippling injuries and illnesses. That promise has been acknowledged by the U.S. Congress in past decades, and today it's critical that the government acts to protect the retirement and health care security of 100,000 or more mine workers and families. 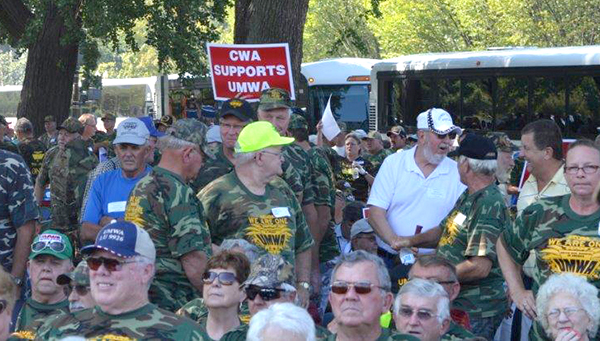 Mine workers and supporters call on the government to keep its promise.

There couldn't be a higher-stakes election for American workers than this year's presidential election between Hillary Clinton and Donald Trump.

On Labor Day, a day that honors working people and kicks off the final election sprint to November, we should talk about Trump’s record on the issues that affect working families, because so much is at stake. Hardworking Americans deserve to know the truth about a man who might become president. We need the facts, not bluster, not attacks, not lies.

Read his full column in the Huffington Post here.

President Obama's Labor Day message to America's working men and women is a powerful demonstration of how important it is to elect leaders – at every level of our government – who understand the needs and aspirations of working families and who are committed to, as the President writes, "make it easier, not harder, for American workers to make your voices heard."

"When workers raise their voices for a fair wage and dignity in the workplace, they sustain the story of America: the idea that if you work hard, you should be able to get ahead, retire with dignity, and leave something behind for the next generation." 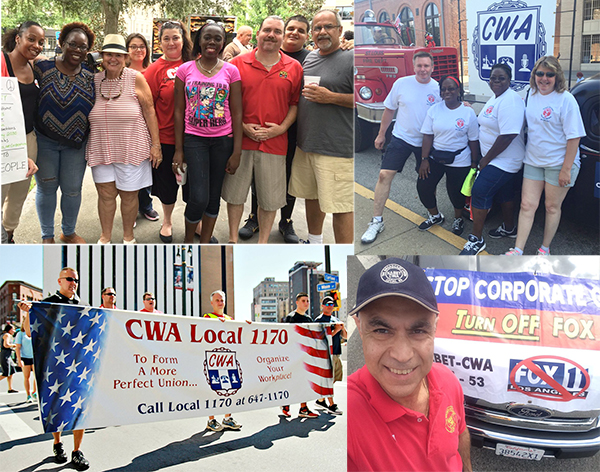 All eight employees at Strathan-Newfield Veterinary Hospital of New Hampshire are now represented by CWA Local 1400.

Volunteer-organizer dog, Bandit, who is a frequent patient at the hospital, helped spearhead the organizing effort with his owner, CWA Local 1400 President Don Trementozzi. 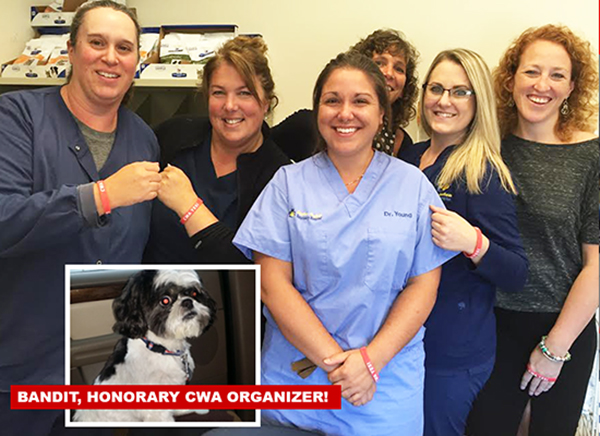 Workers at the Strathan-Newfield Veterinary Hospital celebrate their union.

CWAers and allies are gearing up for a National Call-in and Action Day on the Trans-Pacific Partnership (TPP) on Sept. 14. The coalition of workers, environmental activists, consumer groups, faith groups and many more will generate phone calls to Members of Congress, pressing them to stand strong against the TPP trade deal.

At least 13 Republican House members – plus some Senators facing a tough election, like Pat Toomey in Pennsylvania, who earlier supported "fast track" authority – have switched sides and now oppose the TPP.

Apply for the 2017 Union Plus Scholarship Now!

Applications are available now for the 2017 Union Plus Scholarship Program.

Since 1991, the program has awarded more than $4 million to students of union families who want to begin or continue their post-secondary education. More than 2,700 families have received scholarships.

Current and retired CWA members participating in any Union Plus program, their spouses, and their dependent children (as defined by IRS regulations) are eligible.

Scholarship recipients will receive awards between $500 and $4,000.

For more on the Union Plus Scholarship, click here.

Since announcing APT College as CWA/NETT's new academic partner, there has been a significant increase in enrollments and usage of CWA/NETT's resources by technicians across the telecom sector seeking to update or add to their skill sets.

"This new partnership provides our members with some great opportunities for training online or on location close to home. This is a real benefit for members to take advantage of," said Ed Mooney, Vice President of CWA District 2-13 .

"For years, I have turned to CWA/NETT to take advantage of the training available. Even now, closer to retirement, I still participate to keep up to date. Members should absolutely check out CWA/NETT," said Tim Scarry of Virginia Beach, Va., a Central Office Technician and member of CWA Local 2201.

For members who were training through ITT Tech, please call this number to find out how you can complete your degree by maximizing the credit you have earned from ITT: (800) 431-8488.