AT&T Mobility workers across the country voted to ratify a new contract covering health care and other benefits for 42,000 workers.

CWA District 1 Vice President Dennis Trainor said, “Our main goal was to put health care benefits bargaining back in the regional bargaining agreement process and to make health care affordable for all Mobility workers. This new contract reduces healthcare costs and will improve the standard of living for our members.”

There are four separately negotiated Mobility contracts that now cover compensation and working conditions. An earlier agreement was voted down by the members last month, and continued negotiations resulted in the proposal that went to the membership for a ratification vote.

Among the highlights of the new agreement:

Labor Day is the unofficial end of summer. While the day honors the hardworking women and men who make this nation go and grow, the weekend also gives us a chance for a big backyard barbecue blowout. The AFL-CIO has compiled a list of union-made food and drink to get your barbecue off to a great start.

The list comes courtesy of the Bakery, Confectionery, Tobacco Workers and Grain Millers (BCTGM); the United Food and Commercial Workers (UFCW); Labor 411; and Union Plus. 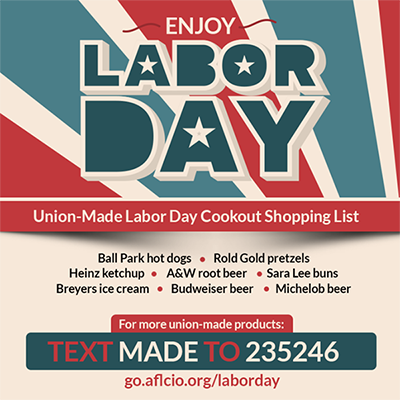 Unmasking the Secrets of a Global Super Court

Buzzfeed News just published a major investigation into one of the most dangerous components of the Trans-Pacific Partnership (TPP) trade deal: investor-state dispute resolution, or ISDS.

Conceived in the 1950s, the system was originally intended to be a neutral referee to help developing nations attract foreign ventures and assist international businesses in protecting these investments. For example, the court could ensure a rogue regime couldn’t suddenly seize a company’s assets.

But since then, ISDS has mutated into a powerful tool that multinational corporations use to escape laws and undermine public policies that cut into their profit margins.

BuzzFeed News writes that its reporting from the Middle East, Central America, and Asia shows “how the mere threat of an ISDS case can intimidate a nation into gutting its own laws, how some financial firms have transformed what was intended to be a system of justice into an engine of profit, and how America is surprisingly vulnerable to suits from foreign companies.” 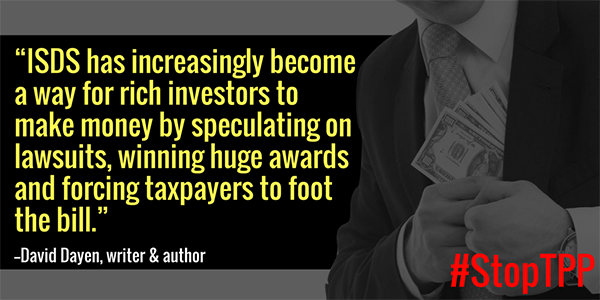 At a congressional briefing this summer sponsored by CWA and the Committee for Better Banks, bank workers put the spotlight on the deceptive and high pressure sales tactics that some banks force workers to follow. Now, the Consumer Financial Protection Bureau (CFPB) has ordered Santander Bank to stop enrolling customers in overdraft protection without their informed consent. The bank has been ordered to pay a $10 million fine.

The CFPB found that Santander hired a telemarketing contractor to sell high-cost overdraft protection and that many customers were enrolled without their consent while others were lied to about its cost. The telemarketer’s employees were forced to meet unrealistic sales quotas, and employees were fired or had their hours reduced when they failed to hit specific sales targets.

The Committee for Better Banks, a project of CWA, the National Employment Law Project, and Americans for Financial Reform, has focused public and government attention on these abusive sales quotas and the risks they pose for consumers in the banking industry.

The CFPB recognized these practices and ordered Santander to stop using outside telemarketers and imposing sales quotas on its employees to sell its overdraft products. Santander is not the only bank to use high overdraft fees as a profit center. Banks charge billions in overdraft fees per year, costing the average consumer who pays an overdraft fee $225 per year.

Read more about the Committee for Better Banks and get involved here. 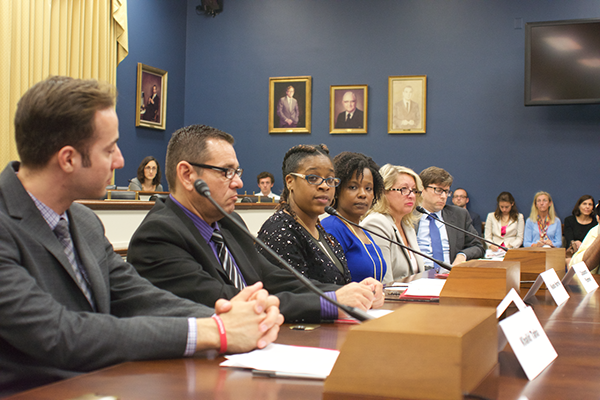 Bank workers testified about big banks’ damaging practices at a June congressional briefing sponsored by CWA and the Committee for Better Banks.

CWA has joined a coalition of progressive groups calling on Hillary Clinton to step up her opposition to holding a vote on the Trans-Pacific Partnership (TPP) trade deal this year.

“It is now more important than ever that the country, the Congress, and President Obama hear specifically that you oppose a vote on the job-killing TPP after the election,” said the letter sent last Thursday. “We urge you to immediately make a clear and strong public statement against holding a vote on the TPP during the ‘lame duck’ session of the 114th Congress.”

Calling on Rep. Stefanik to Stand Strong against the TPP

When asked recently if she would support the controversial trade deal, Stefanik told her local newspaper that she would not support it in its current form and that it should be renegotiated in the next congress, making her the tenth House Republican who voted for “fast track” trade promotion authority last year to announce opposition to the TPP.

This position is a step in the right direction, but leaders gathered last week outside her office in Glens Falls, NY, to pressure her to unequivocally oppose the TPP.

“Congresswoman Elise Stefanik's opposition to the Trans-Pacific Partnership ‘in its current form’ is a good step. But we call on her to join us to fight against a vote during the lame duck session. TPP is a disastrous trade deal that will destroy community jobs and lower wages,” said Walt Lynd, Political Director for CWA-IUE 81359, which represents 620 workers at Momentive in upstate New York. 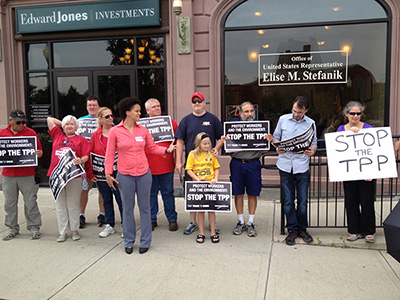 CWAers and local activists gathered outside Rep. Stefanik’s Glens Falls, NY office to call on her to unequivocally oppose the TPP trade deal.