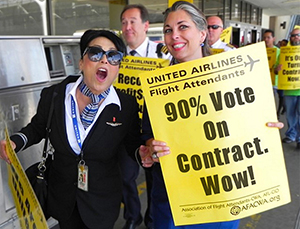 The Flight Attendants at United Airlines, members of AFA-CWA, ratified a contract covering 25,000 Flight Attendants. Over 90 percent participated in the vote to ratify the agreement. This agreement was reached on June 24, 2016, with assistance from the National Mediation Board.

"The high participation in this historic vote demonstrates the deep care Flight Attendants have for their future at the new United Airlines. The contract provides immediate economic gains, sets a new industry standard, and ensures Flight Attendants can achieve the benefits of a fully integrated airline," said Sara Nelson, AFA-CWA International President.

"This contract would not have been possible without the assistance of National Mediation Board Chair Linda Puchala, who was instrumental in helping the parties reach agreement. With the ratification of this contract, we look forward to a great spirit of labor relations at United that fully recognizes the contributions of the people who breathe life into the friendly skies."

The CWA Executive board has approved a strike authorization at Mercy Hospital in Buffalo, NY. In July, about 2,200 nurses, technologists, service, and clerical workers at Mercy Hospital – members of CWA Local 1333 – voted by a 96 percent vote to authorize a strike if a fair contract isn’t reached.

The Mercy Hospital contract expired on June 4. Members are fighting against inadequate staffing levels, deplorable working conditions, and disrespectful management. They are putting the pressure on Catholic Health to prioritize patient and worker safety over executive bonuses and to stop breaking the laws that protect union members.

Bargaining began Aug. 16 covering 3,900 workers at Appliance Park in Louisville, Ky. China-based Qingdao Haier Co. bought the GE Appliance operation, closing on the $5.4 billion deal in June. These are the first contract negotiations since the sale.

CWA District 9 Vice President Tom Runnion put AT&T on notice that it must get serious about bargaining, especially when it comes to health care costs and scope of work issues for premises technicians.

The CWA bargaining committee is holding the line, pushing AT&T to bargain the fair contract that our members deserve, and mobilization is ramping up. 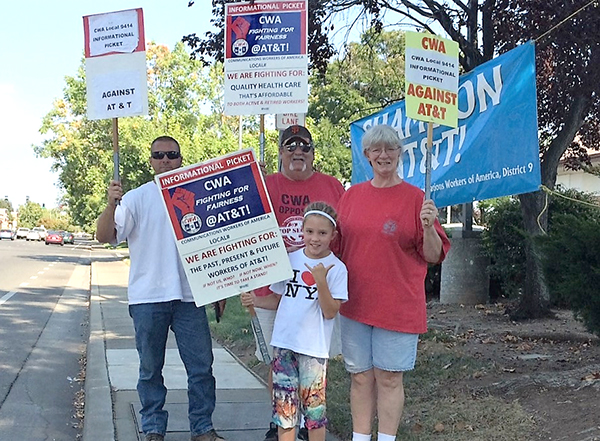 A nationwide unit of 540 DirecTV Tech Support workers has been certified by the AAA. More than 8,000 workers from DTV have now joined the CWA family in the past 6 months.

Internal organizing committee members from the unit held hundreds of conversations with their coworkers to answer questions about the union and how their vision of CWA would be realized.

Journalists at The Lakeland Ledger voted overwhelmingly Thursday to form a union, becoming the first unionized newsroom staff in Florida.

The 22-3 vote by the staff of Polk County's daily newspaper means The NewsGuild-CWA will represent 25 Ledger employees as they bargain their first labor contract with The Ledger's owner, GateHouse Media. Ledger employees have not had a raise in eight years.

The Ledger, with a daily circulation of 45,900, and Sunday circulation of 61,000, becomes the only paper in Florida, and the first in modern memory, to have a unionized newsroom. Thursday's election was administered by the National Labor Relations Board. The campaign was assisted by Special Assignment organizer Melinda Fielder, lost-time organizer Dean Olsen, and Steve Wisniewski of CWA Local 3108. 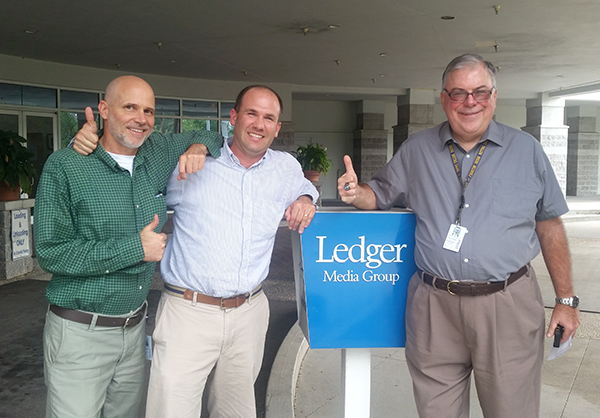 What's Next for Bernie's Political Revolution?

The following is a message from CWA President Chris Shelton:

The past year has shown what the beginning of a political revolution can look like. Together, we phonebanked, knocked on doors, and organized for Bernie Sanders, spreading a message of hope that someday our political system might actually represent the American people instead of the top 1%.

I'm writing to you now because the need for a political revolution remains.

On Wednesday, August 24, we will kick off a new organization called Our Revolution with a major live stream address from Bernie Sanders where he will lay out what we can do going forward to continue the fight for the issues that drove his campaign and inspired so many.

Are you ready to hear about it? Sign up to watch the live stream on August 24 at 9pm ET/6pm PT.

You can also host an Our Revolution launch party to bring together the coalitions we've built in our communities. Sign up here to host a launch event.

The billionaires and the pundits who counted us out from the beginning are hoping we'll go away. They're hoping our political revolution was just a phase, and that they can just go back to the status quo now.

We will show them they're wrong. It's time for the next phase of Our Revolution.

Join Bernie on August 24 to hear about what’s next. Click here to register.

Fighting for $15 in Richmond

Check out more photos and videos of the convention here. 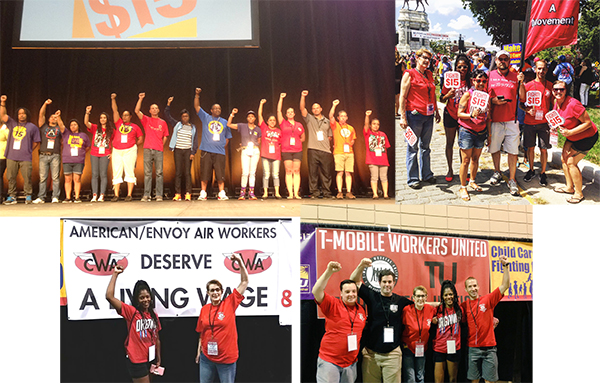 Clockwise from top left: TU Chief Steward Rebecca Disbrow, a T-Mobile customer service representative from Idaho, stands on stage with workers from different industries. "T-Mobile's CEO John Legere makes $25 million a year – that's more than 500 times what an average T-Mobile worker makes! Is his time really so much more valuable than ours?" she asked.
CWA activists join the march on Richmond, Va.
Attendees support T-Mobile workers in their fight for fairness and a voice on the job.
Kala Saxon, Lawton, Okla., and Marie Gage, Chicago, stand up for fair pay at Envoy.

Trump Not Fit to Be President

Americans of every race, religion, gender, sexual orientation and political persuasion have fought for the betterment of our future in times of war and peace. It is without a doubt, though, that those who are willing to sacrifice their lives in order to preserve and protect our freedoms are universally respected, honored and cared for by our nation. Our military has been and continues to be the foundation that America builds upon.

Hillary Clinton and Russ Feingold understand this and have cared for our veterans to the best of their ability. Donald Trump, and the Republicans who continue to support him, do not and continue to speak with hyperbole and no action.

Trump is unfit to serve our highest office. I call on him to apologize to the Khan family and the military community as a whole, who are willing to make the ultimate sacrifice so the rest of us can live easier lives.

As an Iraq war veteran, I know we cannot trust Trump to be our commander-in-chief. Trump's comments on the Khan family are only the latest in a series of his disrespectful rhetoric and record aimed at American veterans and military families, such as lying about donations to veterans' charities, comparing his sex life to combat in Vietnam, and making juvenile and inappropriate comments about the Purple Heart.

Why Are Unions Necessary? 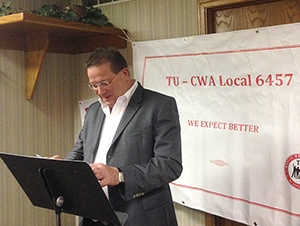 At the grand opening of TU's first field office in Wichita, Kan., ver.di leader Lothar Schröder sat down with the Wichita Eagle to discuss T-Mobile management, globalization, and why a German union is supporting American workers.

CWA activists and allies protested outside the Sacramento office of Rep. Ami Bera, who voted for "fast track" authorization for the Trans-Pacific Partnership last year. As a result of the vote, Bera failed to receive the endorsement of unions or the local Democratic Party.

Another protest was held outside Rep. Scott Peters' office in San Diego, with activists from CWA, the Sierra Club, Public Citizens, and other groups. 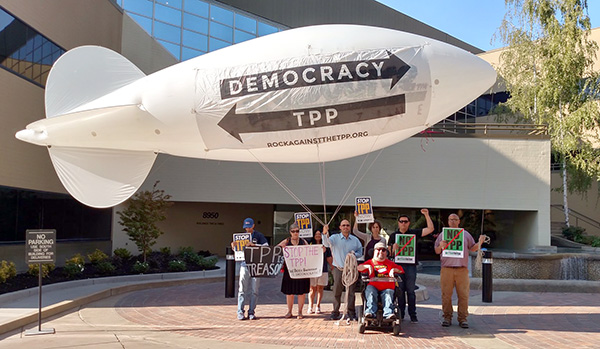 CWA Local 9421 Legislative-Political Director Robert Longer was part of the protest outside Rep. Ami Bera's office. "Ami Bera turned his back on constituents when he voted to 'fast track' the TPP. We're hoping a 25-foot blimp flying right outside his office makes it clear to him that supporting the TPP is betraying his constituents," Longer said.