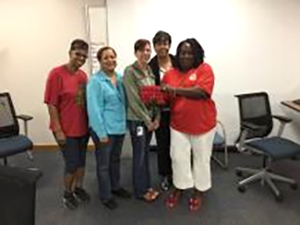 CWA members voted an overwhelming 92 percent "YES" to authorize a strike if a fair contract can't be reached with AT&T Internet. The 2,000 Internet Services Contract members work at call centers, supporting customers, and as technicians.

Bargaining is tough, with AT&T taking a hard line against workers' key bargaining issues including a fair increase in wages and benefits.

The contract expired on July 23; the contract has been extended and negotiations are continuing.

The Consumer Protection Call Center Act of 2016 would increase transparency by creating a list of companies that relocate customer service centers overseas. It would force companies to give 120 days' notice before relocating call-center jobs abroad.

The legislation would also require these outsourcers to repay state incentives and ban them from future state loans, grants, and tax benefits for five years.

"Call center workers and consumers are rightfully concerned by the offshoring of call center jobs," said CWA District 4 Vice President Linda Hinton. "In this digital world, calls can be rerouted anywhere simply by flipping a switch. This costs American jobs and allows our most private business, health, and financial information to be shared with and possibly accessed by less than secure eyes in another country."

Ohio has lost nearly 13,900 call center jobs in the past decade. Today there are 171,700 call center workers throughout the state.

On 51st Anniversary of Voting Rights Act, a Long Way to Go

Saturday marked the 51st anniversary of the Voting Rights Act being signed into law by President Lyndon B. Johnson. This landmark legislation was designed to remove obstacles and restrictions that made it harder for African-Americans to vote.

Fifty-one years later, the fight still continues. Voting rights are under assault from politicians trying to win elections through underhanded, discriminatory tactics. The Supreme Court significantly weakened the VRA in its 2013 Shelby decision, ruling that states with a history of discrimination at the polls did not have to request federal permission to change their voting laws, and now Republican-controlled legislatures are regularly trying to strip away vital portions of the VRA.

July was an encouraging month for voting rights, with judges handing out major victories in six states for the protection and expansion of the right to vote. Courts in Wisconsin, Texas, North Carolina, Kansas, Michigan and North Dakota struck down restrictions related to voter ID, early voting, pre-registration, and provisional voting. It's a battle that will continue in years to come.

As part of their efforts around the VRA anniversary, about 20 activists, including Roanoke NAACP Chapter President Brenda Hale and members of the NAACP Youth Council, peacefully protested at Rep. Robert Goodlatte's Virginia office, demanding a hearing on restoring the VRA. Goodlatte (R), chairman of the House Judiciary Committee, has refused to even hold a committee hearing on the need to restore voting rights protections. 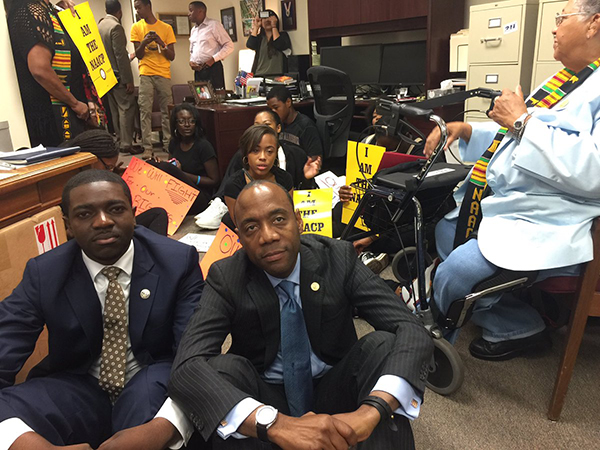 The Norwegian Air Shuttle Flight Attendants chose the Norwegian Cabin Crew Association (NCCA) as their union representative in an election conducted by the National Mediation Board (NMB).

This victory is the culmination of a year-long struggle by the Flight Attendants, with support from AFA-CWA, against Norwegian's efforts to deny them the right to even vote on union representation.

"Any opportunity for Flight Attendants to gain collective bargaining rights has our support," said Sara Nelson, international president of AFA-CWA. "Norwegian's attempt to evade its legal obligations in the U.S. is further evidence that it will stop at nothing to avoid U.S. and E.U. labor laws that allow workers to negotiate contracts for good jobs."

Norwegian attempted to thwart a vote by arguing that it was not the Flight Attendants' employer. With the assistance of AFA-CWA attorneys, NCCA successfully argued that NAS was the employer, and the NMB ruled that NAS and its vendor were joint employers and therefore subject to the NMB's election jurisdiction.

"This landmark decision established that anti-union employers like Norwegian cannot create phony corporate shells to deny employees their legal right to vote for union representation. We look forward to working closely with the Flight Attendants to ensure their victory will be a springboard to bring them the pay and benefits AFA has negotiated for its members around the world," Nelson concluded.

Last Thursday, New Jersey State Senate president Steve Sweeney announced that he would not post the Constitutional Amendment to protect New Jersey public worker pensions for a final vote in the Senate. This was the last step necessary to place the issue on the ballot in November. His stated reason:  he was one or two votes short of a veto-proof majority on a bill to fund the Transportation Trust Fund (TTF).

"There is no reason the pension should be a casualty of the legislature’s inability to secure votes for the Transportation Trust Fund," said CWA NJ Director Hetty Rosenstein. "CWA will never stop fighting for retirement security for our members and retirees. We will leave no stone unturned and we will take every action necessary until we are successful. We will continue to fight for full funding of the public employee pension system one day longer and one day stronger, no matter what." 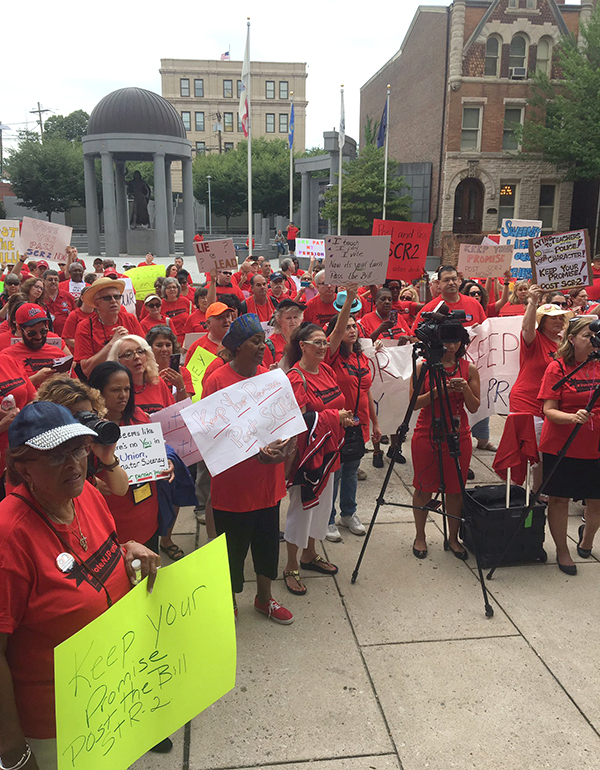 Fight for $15 Activists Meet in Richmond

T-Mobile, Envoy Air, and Tennessee State University employees will join thousands of workers in Richmond, Va., this week, rallying around the nationwide campaign for $15 an hour and a union at the national Fight for $15 convention.

In November 2015, nearly 5,000 Envoy workers voted for CWA representation; they are bargaining for a first contract and to close the wage and benefit gap between workers at regional operations like Envoy and parent company American Airlines Group. Rebecca Disbrow, a T-Mobile customer service representative in Boise, Idaho, will speak about T-Mobile workers' fight for fair wages and a CWA voice.

Watch a livestream of the events at fightfor15.org.

At the convention, participants will vote on a plan to mobilize workers for the 2016 presidential election and beyond. They will take stock of their nearly four-year-old movement's stunning successes – almost 20 million workers have won significant raises as a direct result of the Fight for $15, including some 10 million who are on their way to $15 an hour – and chart a course for all working Americans to gain fair wages and fair treatment.

On Saturday, Rev. William Barber will join some 10,000 activists, including members of CWA Local 2201, in a march on Richmond's monuments to the Confederacy that still stand today, making the connection between the racist policies that result in the poverty level wages paid to too many workers. "We will not stop marching, stop striking, stop joining together until we win $15 an hour and union rights for all our sisters and brothers across the nation," he said.

Across the country, more than half of black workers and nearly 60 percent of Latino workers are paid less than $15 per hour, according to an analysis by the National Employment Law Project.

A ranking Democrat on the House Ways and Means Committee and at least 10 House Republicans who had voted for "fast track" trade promotion authority for the Trans-Pacific Partnership have announced their opposition to the trade deal, joining many Democrats who have already opposed the deal.

Despite speeches and appearances by the U.S. Trade Representative and other administration officials that continue to talk up this bad deal, numbers don't lie. A growing number of legislators are making it clear: No TPP now or after the election.