CWA President Chris Shelton addressed the group on Wednesday, highlighting the need for embracing diversity and equality within organized labor.

"You are the future of our Labor Movement and of our fight for economic justice for working families. It inspires me to be meeting with you," Shelton said. "Diversity and equality are not about so-called political correctness. And they are not luxuries. They're as important and non-negotiable as a decent standard of living, a union job, and the ability for our children to do better than we did." 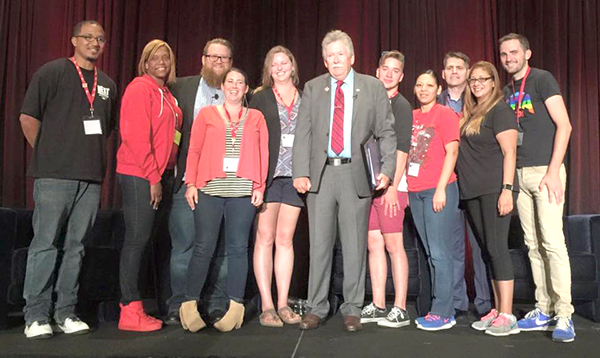 On Wednesday morning, 200 CWA activists marched to City Hall with Michigan United members to urge the Detroit City Council to expand its 'Ban the Box' ordinance to private-sector employers. The 'Fair Chances for All' campaign seeks to postpone questions about criminal records early in the hiring process. 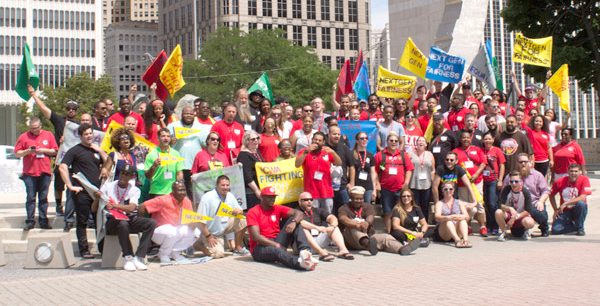 "It will make us better. It will make us a more cohesive community," said Kelli N. Williams, a CWA activist and state president of the Michigan Coalition of Labor Union Women. "Mass incarceration, the school to prison pipeline, and juvenile delinquency are just a few of the issues plaguing our society. After the punishment, there should not be a period of more punishment. There should be a time when businesses are reaching out and lending a hand to help former prisoners become productive members of society."

In a victory for full voting rights, the U.S. Court of Appeals for the Fifth Circuit – one of the country's most conservative courts – ruled yesterday that a Texas voter ID law was illegal and violated the Voting Rights Act, especially in how it would disproportionately affect African American and Latino voters.

The law cannot be enforced for the November elections, the court said.

The law, SB14, was one of the harshest voter ID laws in the country, restricting the rights of more than 600,000 registered voters.

Writing for the majority, Judge Catharina Haynes said there was no evidence to support the existence of voter fraud in Texas. She suggested, however, that the law could have been passed by the Texas legislature with discriminatory intent.

The court agreed that SB 14 "disproportionately impacts the poor, who are disproportionately minorities," and who face "greater obstacles in obtaining the necessary photo identification." States are permitted to prevent voter fraud, Judge Haynes concluded, but they do not get "a free pass to enact needlessly burdensome laws with impermissible racially discriminatory impacts." The lower court must now craft a remedy to fix the law’s legal infirmities.

CWA President Chris Shelton praised the court’s decision, calling it a step toward ensuring that all Americans can exercise their right to vote. "Congress must repair the damage done by the Supreme Court's Shelby decision that weakened the Voting Rights Act and opened the door to the suppression of voting rights, especially among people of color and lower incomes Americans," he said.

A federal judge in Wisconsin ruled that people who have difficulty obtaining identification under that state's photo ID law can sign an affidavit and vote using a regular ballot in November.

Since the requirements took effect in 2016, the state has rejected almost 20 percent of those applying for voter ID, with an amazing 85 percent of those African American, Latino, or Native American. Testimony indicated that 300,000 eligible voters could lose their right to vote.

The measure, "the Automatic Voter Registration Act" would require states to automatically register people eligible to vote when they interact with certain state and federal agencies, unless those people decline. That means getting a driver's license, registering for class, or working with other agencies would enable those citizens to more easily register to vote. The legislation also takes steps to streamline the voter registration process, providing for portability and online registration.

The newsroom staff of The Lakeland Ledger took a major step this week toward forming a union dedicated to preserving high-quality journalism amid cutbacks and mounting financial pressures in the newspaper industry.

Reporters, photographers, copy editors and other employees in The Ledger's newsroom signed cards stating their desire to be represented by The NewsGuild-CWA. The cards, filed Monday with the National Labor Relations Board, will trigger an NLRB-monitored in the next 20 to 40 days.

On Monday T-Mobile Workers United (TU) will open its first field office to support the rapid growth of the union's organizing campaign. Lothar Schröder, a ver.di union leader and vice-chairman of the Deutsche Telekom Supervisory Board, will take part in the ribbon cutting ceremony along with TU Chief Stewards from around the country, CWA activists, and community allies.

The Wichita field office will be a place where T-Mobile workers can learn more about the union and members can ramp up their campaign to improve their workplace.

Middlesex County Board of Social Services

Local 1082 members (New Brunswick, NJ) overwhelmingly voted 77-0 to ratify a 4-year contract at the Middlesex County the Board of Social Services. The agreement covers nearly 300 social services workers at the division that administers welfare benefits for county residents.

The new agreement saw significant improvement on wages, while maintaining benefits for workers. The improvement in wages includes increasing base pay for current workers and raising the starting salary for new hires. The agreement also secures step increments – annual increases in base pay given to workers on the anniversary of their hire date. Over 4 years, workers will see an 8 percent increase in wages retroactive to the expiration of the contract. Healthcare contribution levels were also maintained. 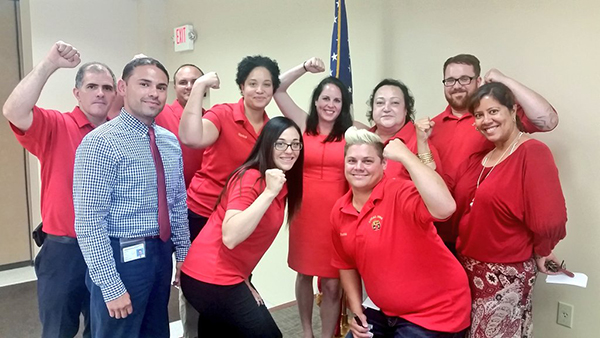 Workers in North Dakota, members of CWA Local 7301, fought back against West River Telecom demands to cut their pensions and other benefits.

Led by Local 7301 President Gene Wolf and bargaining committee members Todd Murschel and Mark Fiest, members mobilized, ultimately gaining a tentative agreement that  maintained the current pension and health care benefits, provided a 3 percent wage increase (retroactive) for all titles in each year of the agreement, and improved contract language.

A big percentage of the 52 members showed up nightly for update meetings during bargaining, pointing to the ability of smaller CWA units to hold their ground and make great gains for current and future members.

Last week, the Federal Communications Commission established clear criteria to guide the replacement of legacy services, an important step to ensure that every American will continue to have access to reliable, affordable, quality voice service. The FCC's updated rules will ease the transition to new communications networks that promise benefits and provide safeguards for customers.

In last week's Tech Transitions Order, the FCC has laid out clear criteria that it will use to evaluate applications to discontinue or reduce legacy service: providing similar levels of network quality as the discontinued service, including 99.9999 percent availability; being in compliance with federal standards regarding 911; access for people with disabilities, and cybersecurity; and being interoperable with fax machines, home security systems, and medical devices.

CWA's Human Rights Conference is Aug. 21-24 in Atlanta, Ga. There's still time to register for the conference (deadline: Aug. 5) and the hotel (deadline: July 29). The program, put together by CWA's National Women's and Civil Rights and Equity Committees, will include movement building, great speakers, and panels and workshops.

Click here for registration information and a draft agenda.

This Saturday, Rock Against the TPP, a nationwide road show sponsored by CWA to raise awareness about the dangers of the Trans-Pacific Partnership, will kick off in Denver, Col.

Click here for more details about the tour dates.

Millions of our union sisters and brothers are veterans. Are you one of them?

The issues facing veterans and those facing working families aren’t independent of each other – a lack of good jobs, attacks on health care and fading dreams of a better life impact each one of us.

The Union Veterans Council brings union members who are veterans together to speak out on the issues that impact veterans most, especially the need for good jobs and a strong, fully funded and staffed VA.

Additionally, the Council holds private enterprise and elected officials accountable for their words and actions. The ability for someone to self-identify as "pro-veteran" isn't determined by what lapel pin they don or what catchphrase they employ; veterans face real issues that require real actions – constructive actions that lead to positive solutions.

The Department of Labor has launched a new website, veterans.gov, a helpful tool for veterans seeking jobs and for employers looking to employ veterans.

At Netroots Nation last week, Senator Tammy Baldwin (D-Wis.) headlined a panel of CWAers and financial reform activists on how we're mobilizing to "Take on Wall Street" and the Big Banks.