Nicole Hamann, who has worked at the Wichita call center for almost two years, hasn’t let the company’s anti-union tactics stop her from joining CWA. "We are here to just improve what we've got,” she recently told the local news.

Rock Against the TPP – In Seattle, San Diego and Portland!

It’s time to get loud! Rock Against the TPP, a nationwide road show sponsored by CWA, just added new tour dates to raise awareness about the dangers of the Trans-Pacific Partnership.

Internationally acclaimed hip-hop artist Talib Kweli will perform a free concert in Seattle on Aug. 19. The tour will also travel to San Diego on July 30 and Portland, Ore., on Aug. 20.

Click here for more details about the new tour dates. 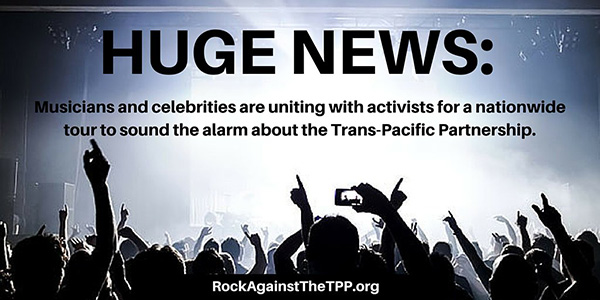 CWA members who were on strike against Verizon have received nearly $600,000 in strike assistance from Union Plus, a benefits program for union members and retirees.

Around 125 CWA members with Union Plus Mortgages received a total of $475,641 in mortgage assistance to help them pay their mortgages, including $441,206 in grants that do not need to be repaid and $34,435 in interest free loans.

353 CWA members who participate in eligible programs received a total of $105,900 in Strike Grants, and about 50 Strike Grant applications are awaiting approval and payment. Grants are $300 and do not have to be repaid.

With Union Plus benefits, your union membership "pays" at work and at home through major life milestones, celebrations and hardships. By using the collective buying power of unions, Union Plus offers discounts and services exclusively to working families. Learn more here.

Last Chance to Sign Up for the July 19-21 CWA NextGen Summit!

Tomorrow is your last chance to sign up to join us at the CWA Next Generation Summit 2016 in Detroit, Michigan from July 19-21! We’ll learn from and share ideas with some of the most creative activists in the nation and develop the skills we need to build our movement for social and economic justice.

The Summit will emphasize training in real-world, practical strategies for mobilization, political action, organizing new members, and engaging current members and our communities. You’ll have the chance to learn in interactive workshops, hear inspirational speakers, participate in solidarity actions, and meet new friends and colleagues.

We have reserved rooms at a discounted rate at the Detroit Marriott at the Renaissance Center. Start by registering for the Summit via the form here, and then we’ll direct you to a link to the hotel.

Nearly 1,000 cooks, housekeepers, bellmen and servers from the Trump Taj hotel and casino in Atlantic City, NJ, represented by Unite Here Local 54, went on strike last Friday after negotiations broke down with management. The workers have seen massive wage cuts, termination of pensions, and loss of healthcare coverage in recent years.

Trump Taj Mahal workers have had a rough time in recent years. First Donald Trump bankrupted the property while earning millions. Billionaire Carl Icahn took it over, using the bankruptcy process to strip workers of their healthcare and even paid breaks. Workers have seen a 35% cut in their wages and benefits since Icahn took over the property.

“Trump economics is a recipe for lower wages, fewer jobs, more debt. He could bankrupt America like he’s bankrupted his companies,” Clinton said. 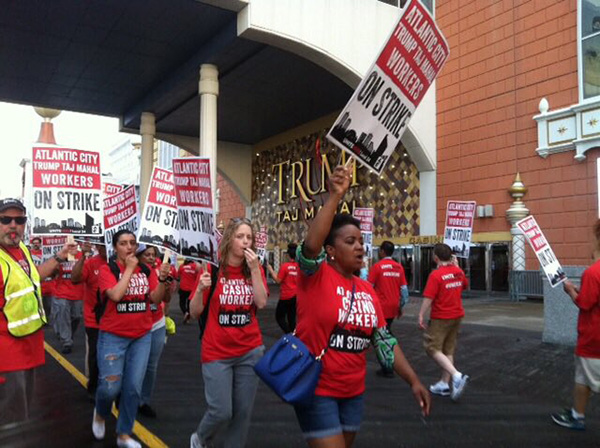 Ahead of the busy 4th of July holiday weekend, Trump Taj Mahal casino workers in Atlantic City, NJ went on strike after failing to reach an agreement with management.