Passenger Service Agents have reported being verbally and physically assaulted by customers, including being hit, having luggage and equipment thrown at them, being pulled over counters, and getting spat upon.

“We need to stop the abuse from customers,” said Ingrid Peredes, an Agent at Envoy. “We’re getting bags thrown at us. People are getting punched and slapped. Miami is a busy airport, and a lot of things are happening there. I’m a front-line employee at the curbside. Passengers are getting upset because we’re trying to charge for the bags, and they throw things at us and curse at us.”

While it is a felony under federal law to assault or interfere with the duties of a flight crew member, including Flight Attendants and pilots, there are currently no federal protections for passenger service workers who are vulnerable to criminal acts while performing their jobs.

“I’m here today in hopes of getting legislation passed that will give agents the same rights as Flight Attendants and pilots,” said James McKnight, an Envoy Agent in Miami. “More and more situations are occurring at airports, putting passenger service agents in bad situations."

The carriers offer no training on dealing with violent passengers, so Agents rely on intervention from other Agents, employees, and even passengers. Sometimes the airport police get involved, but in most cases, passengers face no consequences and are simply escorted to their flights by airline supervisors.

De Anna Davis, an Agent at Envoy in Beaumont, Tex. said: “We’re a small Category 4 airport, which means we don’t have police officers on duty. If an incident occurs and we can’t control the passenger or the situation, we have to dial 911. By the time they show up, it can escalate. Sometimes you have to walk away and close the door and wait for the police to knock on the door. I don’t like anyone to know where I park, because I’ve had people follow me outside, even when I’m helping a handicapped passenger get in their vehicle.” 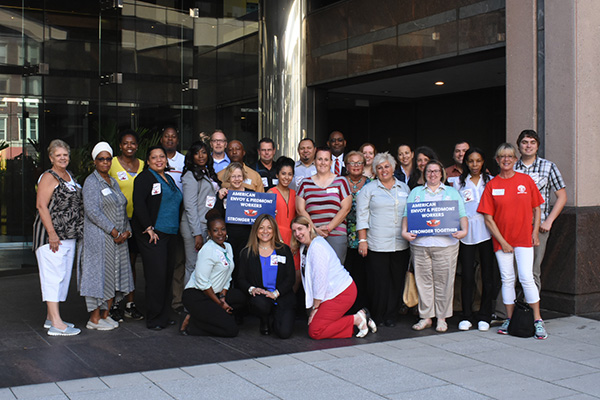 All of the elected leaders and negotiating committee signed a letter to members stating: "We stand behind the Tentative Agreement and unanimously approved submitting it to AFA members for ratification. With your approval, our Flight Attendant contract will set new industry standards that push our careers forward as United Airlines seeks to restore our premiere status in the industry."

A few details of the agreement were released with the letter including pay rates topping American, profit sharing, preserved and expanded healthcare plans, maintained and improved retirement plans and preserved job security.

Additional details will be posted later this week along with a membership ratification schedule. To learn more, visit OurContract.org.

CWA’s Telecommunications and Technologies Bargaining Committee has reached a four-year tentative agreement with OFS covering about 300 workers in Sturbridge, Mass., and Norcross, Ga. Complete details will be released to the membership for a ratification vote. The tentative agreement provides for annual general wage increases that will be retroactive to the expiration of the past contract, and maintains all levels of benefits for active and retired members.

“Members’ mobilization and support made all the difference in bargaining,” said CWA Telecommunications and Technologies Vice President Lisa Bolton. 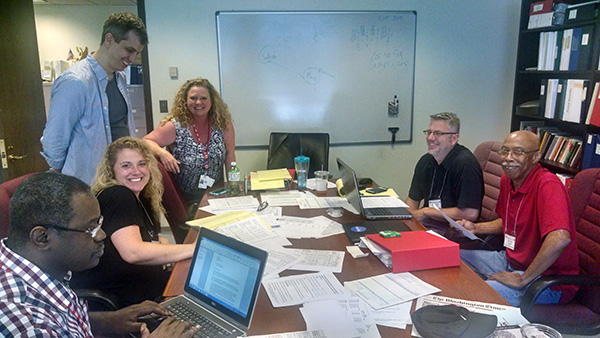 Negotiations opened on June 27 for a new contract covering 2,000 AT&T Internet workers nationwide. At the bargaining table in Bedminster, NJ, T&T Vice President Lisa Bolton said that “CWA’s goal in these negotiations is to make sure that our members and their families are better off at the end of the contract than they were at the start. That means secure jobs, secure health care and the promise of a secure retirement.

“AT&T is a very successful company, leading the telecommunications and video industry. Our members have helped build that success. It’s our turn, and it’s time for AT&T to deliver a contract that gives workers at NIC our fair share,” Bolton said.

By a narrow majority, the Democratic Platform Drafting Committee voted not to include opposition to the Trans-Pacific Partnership (TPP) in the draft platform. But it’s not too late. The full Democratic Platform Committee will meet on July 8-9 in Orlando, FL to approve the final draft. CWA and allies are calling on the Platform Committee to adopt language representing the position of the overwhelming majority of Democrats, making clear the party's opposition to the TPP and urging Congress not to hold a vote on it during the lame duck session.

Both Secretary Clinton and Senator Sanders have pledged to oppose the TPP. The Democratic Party must show it’s on the side of working Americans by taking a stand against the TPP.

Rock Against the TPP

Click here for the full lineup and “Rock Against the TPP” tour dates, featuring Tom Morello of Rage Against the Machine and Audioslave. They’re teaming up to raise awareness about the dangers of the TPP. First stop: a concert sponsored by CWA and others in Denver on July 23.

Hundreds Rally Against the TPP in Washington State

Hundreds of CWAers and allies rallied against the Trans-Pacific Partnership (TPP) last weekend at the Festival for Trade Justice in Tacoma, Wash.

For more than two years, a diverse coalition of local organizations – from labor, environmental and community groups – have been leading the fight against the TPP, a massive trade deal written by and for the corporations. Activists have succeeded in blocking ratification of the agreement, and mobilization will be more important than ever this fall.

“We are demanding that elected officials across the country, including Representatives Derek Kilmer and Denny Heck, listen to their constituents and not to multi-national corporations expecting TPP to cut costs and boost profits,” said Larry Cohen, CWA’s former president.

“Washington deserves better than a trade deal that would ship our jobs overseas, lower our wages, and leave our clean air and water vulnerable to corporate attacks,” said Alex Harris, Sierra Club. “We’re rallying to raise the bar and make sure our representatives stand on our side – the side that will protect American jobs and our clean water, clean air, and climate.”

The Anti-TPP Rally and Festival for Trade was organized by CWA and other union and community organizations. 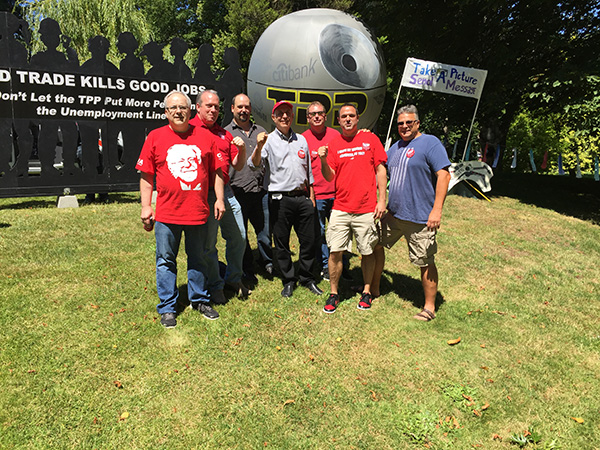