Verizon workers in District 1 and 2-13 voted overwhelmingly to ratify new contracts. The 39,000 workers were on strike for 45 days.

Verizon Wireless technicians ratified a separate agreement by an overwhelming vote. That contract covers about 100 VZW technicians in New York, and contract gains include a 10.9 percent wage increase over the four-year term, a $1,250 signing bonus, new paid parent leave benefits and improvements in stand-by pay.

For Verizon Wireless retail store workers in Brooklyn, NY, and Everett, Mass., who overwhelmingly approved a separate contract, the first-ever contract makes major improvements in job security and other areas. The contract provides a first-ever grievance and arbitration procedure, protections against arbitrary discipline and firing, and restrictions on the company's ability to subcontract work. In a big gain, $2,000 of performance-based pay now will be guaranteed as part of workers' base pay. The contract also gives workers the right to swap schedules, enabling workers to better balance their work and family lives.

Workers at Verizon Connected Solutions also ratified a separate four-year agreement that provides for the same benefit improvements as the core wireline agreement, and in a big gain for workers, maintains a key job title that ensures that these workers will receive wage raises according to the negotiated pay scale.

"Alden is one of the largest newspaper owners in the United States, yet it operates as a dark web of complex business structures to hide itself from the public view," said NewsGuild president Bernie Lunzer. "Alden is laying off the very journalists who'd be reporting this kind of vital information to the public. We believe the public has a right to demand complete transparency about Alden."

Alden is known as a vulture fund that stashes money in notorious tax havens around the world. It has seized and sold off the assets of Digital First Media newspapers, selling real estate, slashing newsroom staff, and outsourcing jobs. Its actions are hurting newspaper employees and depriving communities of access to quality news coverage.

The NewsGuild-CWA represents 870 workers at 12 DFM newspaper bargaining units nationwide, 11 of which have expired contracts. Many workers haven't had a raise for seven to 10 years. The newspapers include the Denver Post, Mercury News, East Bay Times, Monterey Herald, St. Paul Pioneer Press, The Macomb Daily and the Daily Tribune, Kingston Freeman, Pottstown Mercury, The Delaware County Times, The Trentonian, and the Norristown Times-Herald.

See a photo collage of the event here.

More than 6,000 people already have signed the petition calling for transparency at Alden. Sign it here. 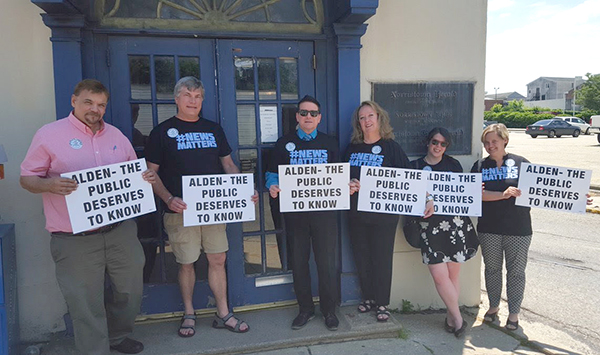 NewsGuild workers at the Norristown Times Herald tell Alden to disclose their investors.

CWA members at AT&T West are pushing for the company to bargain a fair contract covering 15,000 workers in California and Nevada.

Grievance/unfair labor practice strikes by nearly 4,000 members of Locals 9400 and 9510 that began June 9 have been resolved. The CWA locals were protesting management's decision to reassign work on landlines used for 911 emergency calls. AT&T West management has agreed to notify and meet with locals in advance to discuss work assignments and to return that work to system technicians. 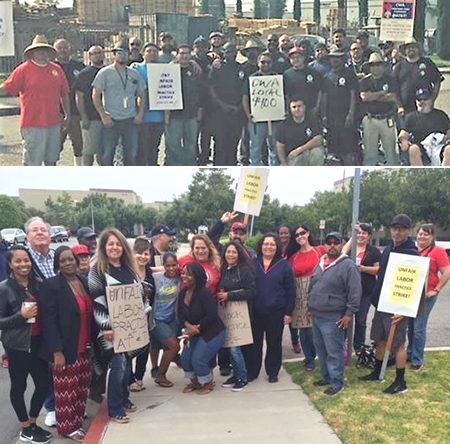 Members of CWA Local 9400 in Fontana and 9510 in Tustin rally in grievance/unfair labor practice strikes.

In a Day of Action, thousands of United Airlines Flight Attendants and supporters protested at major airports around the world on June 16 as they continue to mobilize for a fair contract now.  Meanwhile, bargaining under the supervision and assistance of Federal Mediation Board Member Linda Puchala continued. 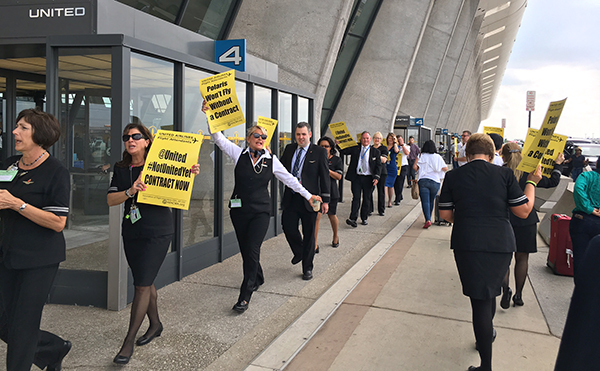 The New York Times wrote about the divide that still exists almost six years after the merger.

CWA members working at Frontier Rhinelander, members of CWA Local 4671, reached a tentative agreement with the company this week, including a fair wage increase and improvements to benefits. An explanation meeting and voting on this new agreement will take place on Thursday evening.

"We did this by working with Kaleida Health on a plan that will address both the patients and the staff that are at the bedside," said CWA Local 1168 President Cori Gambini. "I believe this will help Kaleida Health continue to be the employer of choice for health care workers and the best choice for the community to seek medical care." 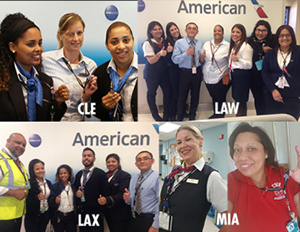 Solidarity around our Envoy system.

CWA stewards and members in New Jersey are mobilizing in support of legislation that would place a Constitutional Amendment on the ballot this November to guarantee pension payments for the state's public worker pension system.

The legislation has been approved by State Senate and State Assembly committees, and both bodies must pass the legislation with a simple majority by the end of June in order for it to appear on the ballot this November. The Amendment would require quarterly pension payments – protecting the pension and saving the taxpayers billions.

CWA New Jersey State Director Hetty Rosenstein said that without the constitutional amendment, "the plan will go under altogether. We need to save it. We need to make sure basic benefits are covered." 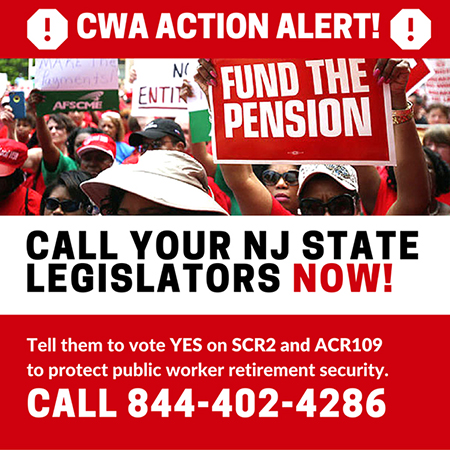 Activists Call Out T-Mobile on Its Home Turf

T-Mobile can run, but it can't hide.

In the latest protest against the company's business practices, labor and community activists gathered outside the company's annual shareholders meeting to raise awareness about the use of deceptive advertising, unfair debt collection and fraudulent enrollment. CWA joined Change to Win, Washington AFL-CIO, Working Washington, Center for Justice, Poverty Action and many others at a demonstration in the company's hometown of Bellevue, Wash.

The action coincided with a coalition of state legislators and economic justice groups urging Washington Attorney General Bob Ferguson to investigate T-Mobile. Change to Win has filed a complaint against the company, outlining how T-Mobile has broken Washington's Consumer Protection Act and violated a 2013 settlement with the attorney general over misleading advertising. 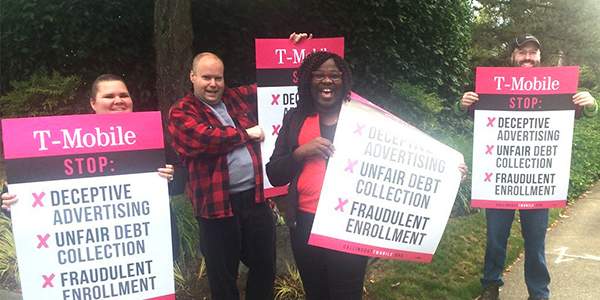 Save the Date: Register for Next Gen Summit, Human Rights Conference

Young CWA activists will meet in Detroit on July 19-July 21 for the 2016 Next Generation Summit. It's a great opportunity for young workers to meet fellow activists, develop new movement building skills, and network with allies.

The deadline to register for the Summit is July 8. The deadline for registration for the discounted hotel rate at the Detroit Marriott is July 1.

CWA Human Rights activists will meet in Atlanta on August 22-24. The joint program is put together by CWA's National Women's and Civil Rights and Equity Committees.

CWA joined AFT, AFSCME, and the AFL-CIO in a letter to the Consumer Financial Protection Bureau (CFPB) supporting a new proposal to help student loan borrowers lower their payments.

The CFPB is developing a new document called a "Payback Playbook" that will provide information to borrowers about payback options so they can choose the most affordable monthly payment plan. Without solid, factual information, borrowers end up in trouble – with late payments, defaults, damaged credit ratings, and even loss of jobs or housing. CWA has called on the CFPB to expand and improve the Payback Playbook.

The Union Plus scholarship program has awarded $150,000 in scholarships to 104 students representing 32 unions, including six winners from CWA families. The CWA winners are:

Applications for 2017 scholarships now are available. The deadline is January 31, 2017. Apply online here.