They stood strong for 45 days in the largest strike in recent history. Now, nearly 40,000 Verizon workers are celebrating big gains after reaching a tentative agreement with the company.

Verizon will add 1,300 new East Coast call center jobs, keep open call centers that had been threatened with closure, and strengthen retirement security, among other gains. They will also deliver the first-ever contract for about 70 Verizon Wireless retail store employees.

"We secured a contract our members can be proud of. It secures additional good middle class jobs for our members in the Mid-Atlantic and keeps them in our communities," said CWA District 2-13 Vice President Ed Mooney. "I am so proud of the members for standing together and standing up for themselves; our communities, the customers and their families."

"The members' unity and determination defeated company proposals to outsource and contract out work, and the new agreement will create a total of 1,500 new union jobs up and down the East Coast," said Dennis G. Trainor, Vice President of CWA District One. "Together, we are turning the tide from cutbacks against working people to building a stronger labor movement and strengthening the power of working Americans."

A sky banner greeted Verizon workers in Hamilton, New Jersey, as their first shift after the strike began.

Check out these great videos of our members celebrating the agreements, in District 1 and District 2-13.

Read the details of the agreement here.

Read some of the media coverage about the strike here.

The contract covering nearly 300 CWA members at OFS from CWA Locals 1400 (Sturbridge, Mass.) and 3263 (Norcross, Ga.) has been extended until June 29, and the CWA bargaining team continues to push hard for a fair contract.

OFS, once part of the former Lucent, is owned by Furukawa Electric and is their top performer. OFS's profits have more than doubled over the last year. OFS is a leading manufacturer of fiber optic cable and products.

CWA Telecommunications and Technologies President Lisa Bolton said members are mobilizing and putting pressure on OFS to recognize the sacrifices they have made in past years. "Our members want a fair contract," she said.

AT&T West members of CWA Local 9003, who handle "611" calls, or customer calls about service problems, rallied in North Hollywood for a fair contract. Bargaining is continuing. Get the latest updates here.

Members of CWA Local 9003 rallied in North Hollywood for a fair contract.

Unions, allies, and many union members and retirees have donated more than $548,000 to the Verizon Striking Families Solidarity Fund.

In thanking donors, CWA President Chris Shelton said that contributions are being used to assist CWA and IBEW strikers who have expenses that can't be covered in any other way. "Your support meant that our striking members would not be 'starved' back to work and would be able to keep up the fight. It made all the difference."

"We will never forget your unselfish act of solidarity, and I am very proud to stand with you as we Fight the Fight Together," Shelton said.

AFA-CWA Marches for Equality at Board of Directors Meeting

While meeting in Atlanta, the entire Board of Directors of AFA-CWA – the union's highest governing body – participated in a "Bridge the Gap" protest march for equality that focused on Delta Airlines. Delta Connection Flight Attendants are not equally recognized for their contribution as frontline employees of Delta's network. The AFA-CWA leaders marched several blocks to protest outside of the World of Coca-Cola, an Atlanta-based company whose CFO Kathy Waller is a member of Delta's board of directors.

"The airline industry is raking in billions, at the expense of workers on the frontlines of regional airlines," said AFA International President Sara Nelson. "Delta and the other major U.S. carriers are profiting from wage inequality. It's the same brand and the same passengers are buying tickets, but compensation for Delta Connection's first responders is 45 percent less.

Bridge the Gap is the campaign to end regional and mainline compensation disparity and lift standards for all Flight Attendants. 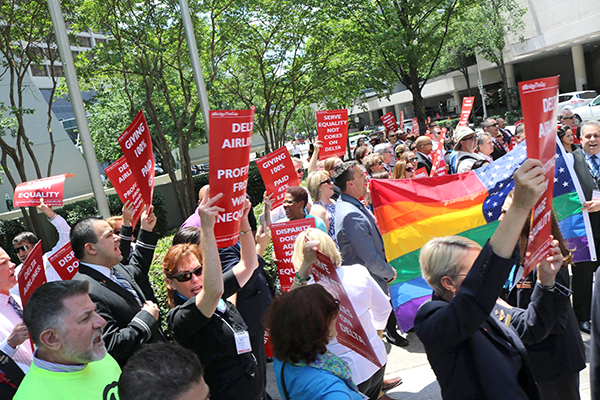 The Board of Directors of AFA-CWA rallied to "Bridge the Gap" in Atlanta.

Representative Marc Veasey (D-TX,) along with 48 other Members of Congress, has formed a Voting Rights Caucus to push Congress to protect and expand voting rights.

Three years after the U.S. Supreme Court struck down key provisions of the Voting Rights Act, Congress still hasn't acted to rewrite and update the legislation. House Judiciary Committee Chairman Bob Goodlatte (R-VA) has refused to even hold a committee hearing on the need to restore voting rights protections.

CWA District 6 Vice President Claude Cummings, who heads CWA's human rights efforts, said the Voting Rights Caucus "would take on the refusal of the House Republican leadership to move forward on legislation to strengthen and protect the right to vote."

Chris Shelton, president of CWA, released a statement in honor of Memorial Day:

"On Memorial Day, we remember the brave men and women who fought and died to protect our country. These brave Americans deserve our gratitude and our respect every day, just as today's veterans and the families of those who have given their all for this country deserve care, fair treatment and the benefits they have earned."

"Through the years, tens of thousands of CWA members have served and sacrificed, in World War II, Korea and Vietnam to today's conflicts. Hundreds of CWA members also are among those who continue to serve through the military reserves and the National Guard."

"If we truly value our freedoms, we must value those who keep us free. As a veteran, I'm proud that CWA is fighting to make certain that veterans — and all working people — have the opportunity to share in our nation's economic gains and to achieve the American Dream. They deserve no less."

We Want to Hear from You

CWA and allies are taking on Wall Street and mobilizing to end the deceptive financial practices that too many Big Banks and lenders use that harm working families.

If you have a personal story that you'd like to share about your experiences with any of the circumstances below, please send it to news@cwa-union.org.

These personal stories would be used to put a human face on the financial reform agenda we're pushing. Read more at www.takeonwallstreet.org.

IUE-CWA has awarded 17 partial college scholarships for the 2016-2017 academic year. IUE-CWA members' children and grandchildren, including those of retired or deceased members, were eligible for the awards.