While workers' wages have stagnated over the last few decades, CEO pay has swelled to obscene levels. In 1980, CEOs earned 42 times, and in 1990, CEOs earned 107 times what the average worker did – but this report shows that the gap is continuing to grow.

How can these corporations afford to pay their CEOs so much? One way is through our tax dollars. Corporations are paying less and less income tax, which means the tax burden is being shifted to workers while companies rack up profits and hike executive pay. According to the AFL-CIO's analysis, federal revenue from corporate income tax receipts has dropped to half of what it was in the 1950s.

Companies often complain that their tax rates are too high, but behind the corporate spin, our nation's effective tax rate is actually lower than many other developed countries. And despite hefty profits, employers regularly get away with paying employees poverty wages while some workers have to turn to public assistance just to put food on the table. As a result, our taxpayer money subsidizes these exploitative labor practices while CEOs take home massive salaries.

Worse still, many of these highly-paid CEOs are being paid handsomely as a reward for cost-cutting, often in the form of shipping jobs overseas. As a result, our economy is rapidly becoming unbalanced for everyday workers.

Even as nearly 40,000 Verizon workers strike for a fair contract, Verizon CEO Lowell McAdam raked in $18.3 million in 2015 – 498 times more than the average pay of a Verizon worker. Verizon has seen record profits of $39 billion over three years, but still continues to ship jobs overseas, force workers away from their families for months at a time, and undercut middle class jobs.

At other CWA employers: AT&T CEO Randall Stephenson made 682 times more than the average worker, while Brian Roberts, the CEO of Comcast, which owns NBC Universal, made a staggering 983 times more.

Bargaining is continuing with negotiators from CWA, IBEW and Verizon, with the participation of the Labor Department.

"I'm encouraged by the parties' continued commitment to remain at the bargaining table and work toward a resolution," Secretary Perez said. "We will continue to facilitate conversations to help the unions and the company reach an agreement."

Today in New York, more than 500 CWAers protested outside a financial media and communications summit, where Executive Vice President Bob Varettoni and Chief Financial Officer Fran Shammo spoke. Shammo said the company has basically stopped doing new installations of FiOS as a result of the strike by 39,000 workers, now in its sixth week.

In Washington, D.C., hundreds of CWAers and allies were set to picket outside a Verizon Wireless store today, then march in front of the White House and rally across the street in Lafayette Park. Several workers will tell their stories of staying strong during the strike.

This Saturday, May 21, Verizon workers and allies from Virginia to Massachusetts will hold family and community events, part of a national Family and Kids' Day of Action. 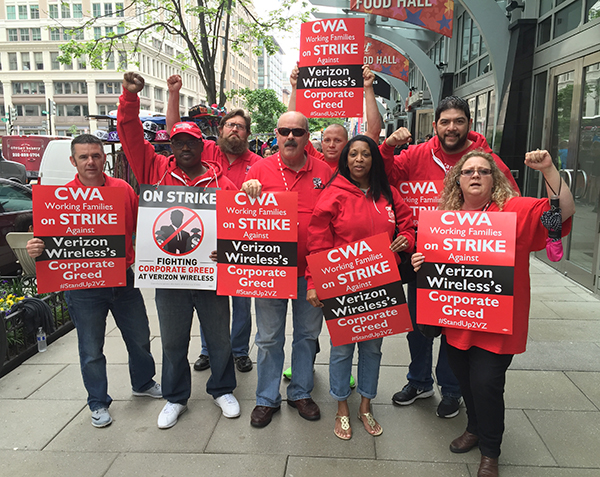 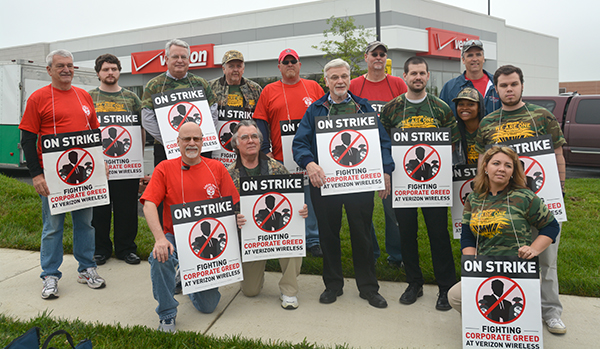 CWA District 9 Vice President Tom Runnion, AT&T local presidents, District 9 staff and the Union Bargaining Committee met on May 11 to discuss the status of negotiations and AT&T's giveback demands. The mobilization team reported on current and future actions planned, and locals reported that members are united, standing strong and ready for fight for a fair contract.

CWA members in California and Nevada have been working without a contract since April 9.

The AFA-CWA Joint Negotiating Committee continues to meet with United Airlines management, working with a federal mediator to bargain a new contract covering 24,000 Flight Attendants at the merged airline.

Flight Attendants at United, Continental and Continental Micronesia, the pre-merger airlines, all made sacrifices to help create the success the airline now enjoys. The merger is only working for executives and shareholders. It needs to work for all United Flight Attendants and passengers, too. 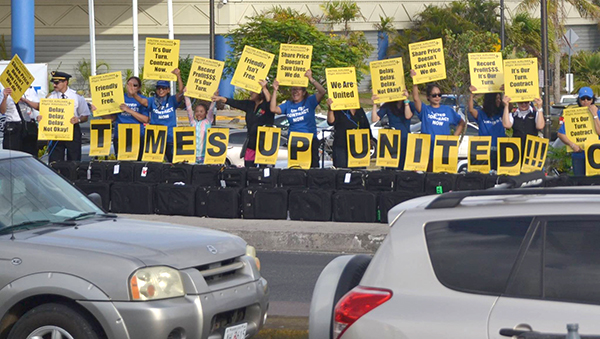 Flight Attendants rally in Guam for a fair contract.

Employees at the Hawaii Tribune-Herald are pushing back against regressive sick leave policies that Oahu Publications Inc. (OPI) is trying to spread to newspapers throughout the state.

The Pacific Media Workers Guild, the News Guild local representing workers at the East Hawaii daily newspaper, filed an unfair labor practice charge last week with the National Labor Relations Board challenging OPI's practice of forcing employees to forfeit vacation days when they use sick leave and requiring a doctor's note for each illness.

The Black Press-owned company started enforcing those policies after it bought the newspaper in December 2014, despite never putting them in writing. OPI, which laid off nearly half the staff at the profitable publication and forced employees to reapply for their jobs, insists this is standard practice at its non-union newspapers.

The practice of docking vacation time for illnesses has occurred even when an employee has earned sick leave.

"Employees should be encouraged to take care of their health rather than be penalized," said Tom Callis, Hilo unit chair and the local's Hawaii vice president. "These policies do not help create a healthy and productive workplace." 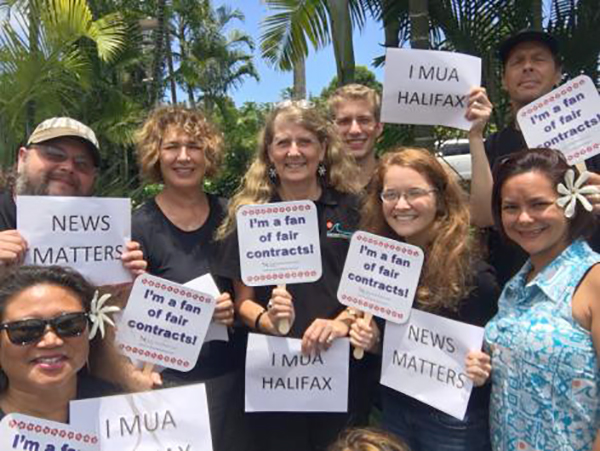 While fighting their own battle, Hilo Guild members took time to show their support for the #NewsMatters campaign at Digital First and for CWA Canada (Guild) strikers in Halifax. Hilo's Thomas Callis explains that "I mua" means "forward" in Hawaiian and was famously used by King Kamehameha in a battle cry that translates to: "Forward my young brothers and drink of the bitter waters of battle for there is no turning back until we are victorious."

The release of the U.S. International Trade Commission (ITC) report on the Trans-Pacific Partnership (TPP) this week demonstrates that the TPP would not deliver the economic benefits promised by the U.S. Trade Representative. Instead, the report shows that the deal would be disastrous, increasing the U.S. trade deficit by over $21 billion per year and harming employment in key industries.

The report is particularly disturbing because the ITC has a track record of being overly optimistic about the effects of free trade deals on American workers and our economy.

"Across the electorate and throughout the country, the public is coming out strongly against the TPP and for good reason," said Shane Larson, CWA Legislative Director. "The TPP was based on a trade model that has led to lost manufacturing jobs, lower wages, and increased trade deficits. It's no surprise that those outcomes are what the TPP will deliver."

CWA activists in New Jersey are mobilizing as part of an extensive statewide member education campaign to build support among our 800,000 members and retirees for a constitutional amendment that will require the government to fully fund public workers' pensions.

CWAers have completed more than 1,000 volunteer shifts of knocking on doors and calling public sector union members to talk to them about the November ballot initiative.

The campaign is using the latest smartphone and app technology so that activists can talk with the maximum number of voters and track the results. Volunteers have also been phone banking to contact members about the November vote to amend the constitution to hold politicians accountable and save our pension.

In 2011, Governor Christie signed a law requiring the state to do its part in restoring proper funding for the pension system, after forcing pension cuts for workers. The governor then reneged on the deal, grabbing billions of dollars from the pension system to help his own budget when state revenues fell short of expectations.

Christie said the state couldn't afford to make the pension contributions, but had no problems protecting billions in tax relief for profitable corporations and people making more than $400,000 per year.

Last fall, the New Jersey Supreme Court ruled that Christie could break both his word and the law by skipping these scheduled pension payments. Undeterred, CWA and other unions filed a petition for review with the U.S. Supreme Court, but the justices declined to hear the case. That means the lower court ruling currently holds up. That's when CWA and other public worker unions moved forward on the referendum campaign. Expected to gain final approval from the legislature, the question would appear on the November ballot. 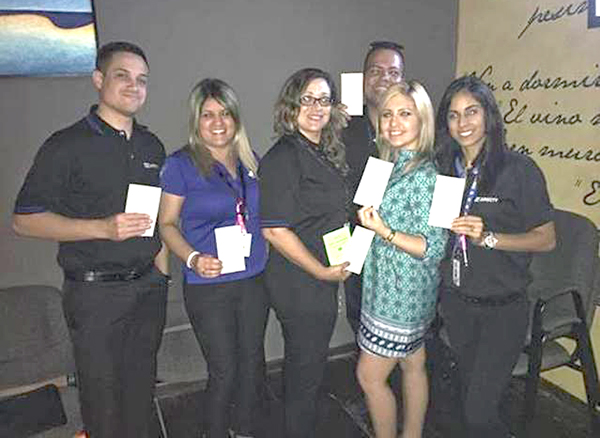 DirecTV sales consultants show their support for a CWA voice. 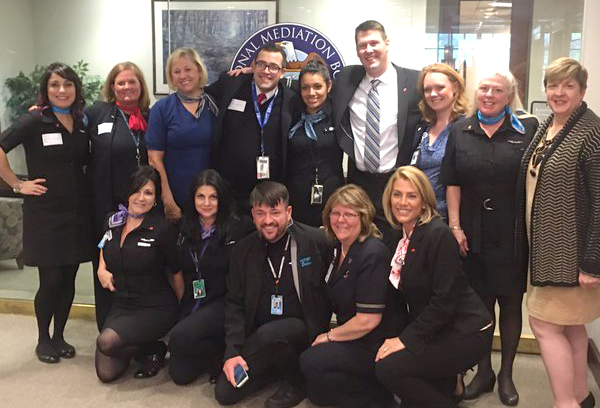 More than half of the AT&T Global Customer Service employees in Denver (former LNS) indicated that they wanted CWA representation, with 49 workers joining CWA with the support of Local 7750 and President Chris Roth, who led the effort.

In a big victory for working families, the Obama Administration announced a new rule this week to ensure that workers are paid fairly for overtime hours. Under current laws, if you are a salaried worker working more than 40 hours per week, you are only guaranteed automatic overtime pay if you make less than $23,660. The new rule increases that cutoff to $47,476 in December.

The new rule is estimated to directly benefit more than 13 million workers – about 4.2 million will be newly eligible for overtime pay, and 8.9 million who are already eligible will have an easier time proving their eligibility. The rule will increase wages and help prevent overly long workdays.

T-Mobile Can’t Force Workers to Be Happy at Work

Another big win at T-Mobile US! The National Labor Relations Board (NLRB) has ruled that two more rules in T-Mobile's employee handbook are illegal: a prohibition on recordings in the workplace and forcing employees to maintain a "positive work environment."

The decision builds on the NLRB's landmark, consolidated ruling that T-Mobile maintained unlawful policies that blocked workers from organizing or even talking to each other about problems on the job. In March of 2015, Judge Christine Dibble found 11 of the 13 handbook rules challenged by CWA to be unfair labor practices. The union appealed the decision on the remaining two items.

This month, the NLRB affirmed Dibble’s findings and ruled in the union’s favor, noting that every issue CWA disputed in the company handbook was a violation of the National Labor Relations Act.

The victory against requiring workers to maintain a "positive" attitude has generated some funny headlines:

Hell Yeah, You Can Bitch on the Job!

Hate Your Job? It's Illegal For Your Boss To Force You To Act Happy

Go Ahead and Scowl — Your Boss Can’t Fire You

And the issue even made it into Stephen Colbert's monologue! Watch it here.