Activists from unions representing more than 200,000 aviation workers rallied outside the White House, calling on the Obama administration to deny the petition of Norwegian Air International to provide service to cities in the U.S. and European Union.

Norwegian Air is a virtual airline, created to undercut labor standards and pay cheap wages while flying in the lucrative trans-Atlantic market. It wants to follow the same "flag of convenience" model that has destroyed so many good U.S. maritime jobs.

"Our government should enforce labor standards and not give foreign corporations the opportunity to avoid labor laws and trample on workers' rights," said CWA President Chris Shelton. "We must stop this race to the bottom when it comes to good jobs, in the aviation industry and all our industries," he said.

AFA-CWA International President Sara Nelson said, "This tentative decision by the Department of Transportation threatens thousands of aviation jobs. The DOT's failure to enforce labor provisions in the U.S.-EU Open Skies agreement sends a message to workers: everything matters except you. The White House needs to fix this now for 300,000 aviation workers, our families and the communities where we live and work."

NAI plans to use pilots hired under Singaporean or Thai employment contracts. Despite a longtime collective bargaining relationship with its own unions in Norway, the company doesn't intend to use Norwegian crews under existing union contracts. Instead, it has attempted to evade Norway's employment and tax laws by basing its corporate operation in Ireland, even though it does not offer air service in Ireland.

Last month, the Transportation Department tentatively approved a foreign air carrier permit for NAI that would enable it to offer expanded transatlantic airline service, despite serious concerns about the violation of labor standards.

A bipartisan group in the House of Representatives is looking to block the Transportation Dept. from moving forward on this flawed policy. We commend those House members for standing up for good jobs and working conditions. Click here to tell your Representatives to cosponsor HR 5090 to enforce the high labor standards negotiated in the E.U.-U.S. Open Skies agreement. 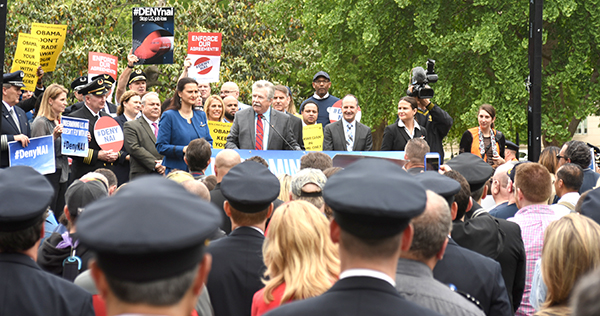 CWA President Chris Shelton calls on the Obama administration to stand up for airline workers' rights. To his left is AFA-CWA International President Sara Nelson. 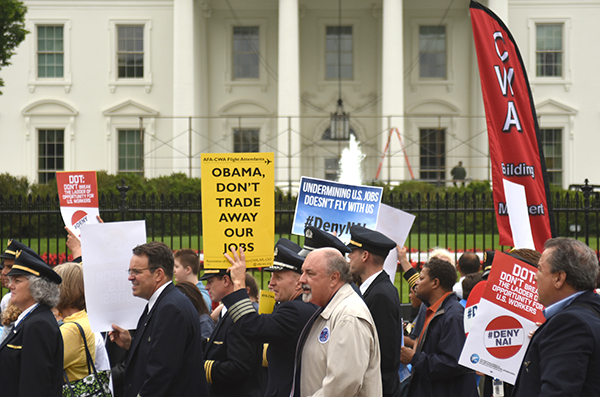 CWA, AFA-CWA and union activists march past the White House.

Workers at AT&T West are standing together against management demands for cuts in health care, retirement security and disability pay, as well as its refusal to fairly address working conditions and job issues for customer service representatives. CWA members in California and Nevada have been working without a contract since April 9. 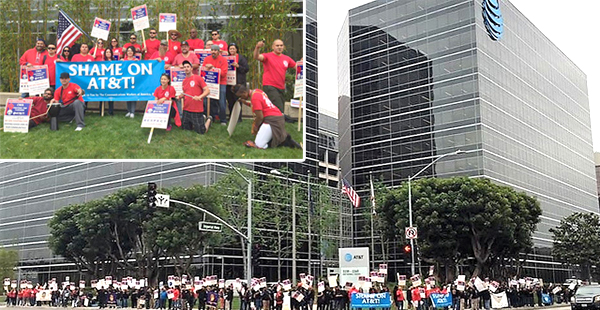 The campaign focused on one of the biggest newspaper chains, Digital First Media (DFM), where the #NewsMatters hashtag appeared on leaflets, T-shirts, and desk tents of workers represented by The NewsGuild-CWA.

DFM workers who remain are fighting back – even at the risk that their own jobs might be on the line next.

NewsGuild President Bernie Lunzer said the #NewsMatters campaign was more than a contract fight. "The time-honored values of journalism, our tradition of public service and ability to do our jobs to the best of our ability – all that is threatened when financial speculators take over newspapers," Lunzer said.

Thirteen union-represented DFM workplaces are standing together in solidarity. 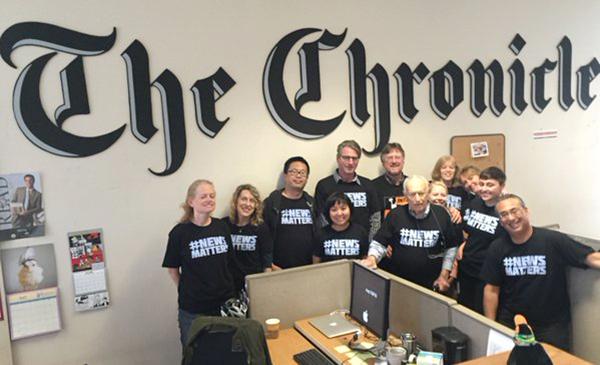 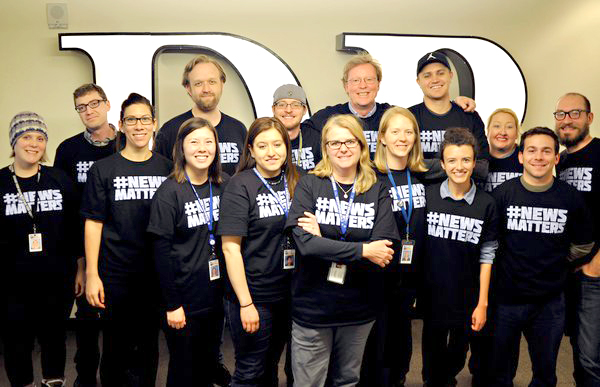 The strike by 39,000 CWA and IBEW members at Verizon has hit the one-month mark, and activists and allies are expanding our mobilization and actions to get Verizon to bargain a fair contract. Picket lines are strong and striking workers are determined to last one day longer than greedy Verizon.

CWA members, locals and allies nationwide, including the AFL-CIO and Jobs with Justice, are "adopting" Verizon Wireless stores in every CWA district and picketing them, to push Verizon to get serious about bargaining.

There's a lot every CWA member can do. 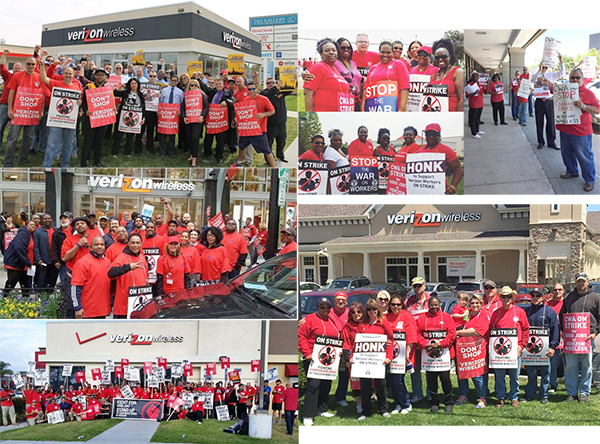 Across the country, CWAers, other union members and allies are walking picket lines outside Verizon Wireless stores. Clockwise, from top left:

In Houston, members of CWA Local 6222 demonstrate and leaflet at Verizon Wireless.

Solidarity in San Diego, from members of CWA Local 9509, CWA 9119/UPTE, and the American Federation of Teachers.

The series of bills passed last week by Republicans in the Michigan House are not intended to address the serious problems facing the Detroit Public Schools or to find ways to give students the opportunity to succeed. Instead, they are an attempt to silence teachers and punish them for their determination to advocate on behalf of students and classrooms.

Teachers would be stripped of their collective bargaining rights. House Republicans want to tie new hire pay to standardized test scores, lower the bar for teacher certification and establish harsh penalties for any public employee who goes on strike.

This so-called plan is riddled with failed education experiments that other jurisdictions already have rejected. On top of it all, the House plan does not does not provide enough money for the school district to pay down debt while continuing to operate, and it does not contain a provision to return control of the schools to a locally elected school board.

Lawmakers are exploiting this community crisis for their own political games, instead of working for a real solution. In the words of the Detroit Free Press, the bills are "ideological malice," are "designed to fail" and have "nothing to do with helping children."

A separate bipartisan plan passed by the Michigan Senate incorporated input from local and education leaders over the course of 15 months. In contrast, the House rushed through its legislation in just 15 hours.

We're joining the AFT in calling on Gov. Rick Snyder to veto these bills.

In Dayton, Ohio, IUE-CWA members, AFL-CIO Secretary Treasurer Liz Shuler and Mayor Nan Whaley met for a news conference and forum on how bad trade deals like the North American Free Trade Agreement (NAFTA) have harmed working women in Ohio and beyond. IUE-CWA members talked frankly about their work in manufacturing and how they lost their jobs as plants closed in a "race to the bottom" perpetuated by so-called free traders.

The event was held at the site of Harrison Radiator, a plant that employed hundreds of IUE-CWA members and that was demolished in 2008. Today, all that remains of the plant are the turnstiles through which workers entered every morning.

Barbara Philpot worked at the Harrison plant for over 20 years, and shared her experience:  "My job in manufacturing was an excellent career path for me, as I was able to build a life and provide for my daughter. But things took a sad turn. Because of competition with low-wage plants in Brazil and Mexico, over time, our workforce dwindled until the plant was forced to close in 2008. I was one of the last people there to witness the plant doors being shut and locked. It was a horrible day."

The group urged members of Congress to vote no on the Trans Pacific Partnership (TPP) that will further destroy manufacturing jobs in the U.S. Shuler said, "The industrial heartland of this country is being hollowed out, mainly due to bad trade agreements. That's why we're working every day to figure out a way to put an end to TPP."

We Want to Hear from You

CWA and allies are taking on Wall Street and are mobilizing to end the deceptive financial practices that too many Big Banks and lenders use that harm working families.

If you have a personal story that you’d like to share about your experiences with any of the circumstances below, please send it to news@cwa-union.org.

These personal stories would be used to put a human face on the financial reform agenda we’re pushing. Read more at www.takeonwallstreet.org.