More than a dozen activists from CWA Districts 4, 7, 9 and the T&T Sector traveled to Billings, Mont., last week to attend AT&T's annual shareholders meeting. They greeted the 200 attendees with leaflets and a banner declaring, "SHAME ON AT&T!"

John Adams, Jr., third vice president, CWA Local 9421, said the goal of the trip was to refocus the company's attention on where it should be – on workers. "Our message was quite simple: AT&T needs to reward the workers who make this company the premier integrated communications company in the world and negotiate fairly at the bargaining table. The way that AT&T has approached this round of bargaining in District 9 is shameful," he said.

The CWA activists were disappointed – though not entirely surprised – when they learned that AT&T recently ended the open mic portion of the meeting, silencing the voices of workers and the public who are also shareholders.

But throughout the day, activists engaged with the AT&T's leadership, including CEO Randall Stephenson, Labor Relations Executive Vice President Mark Royse and Labor Relations Vice President Melba Muscarolas. While networking with shareholders, activists put a human face on our bargaining priorities: job security, healthcare and a dignified retirement for our members. LaNell Piercy, a Legacy T retiree from Ohio, shared firsthand how AT&T has broken its commitment to those who helped make the company so successful.

A statement by CWA Bargaining Chair Ellen West that was distributed at the meeting pointed out that treating new hires as second-class citizens with escalating healthcare costs and eliminating retiree healthcare coverage and pensions makes no sense for such a profitable company. 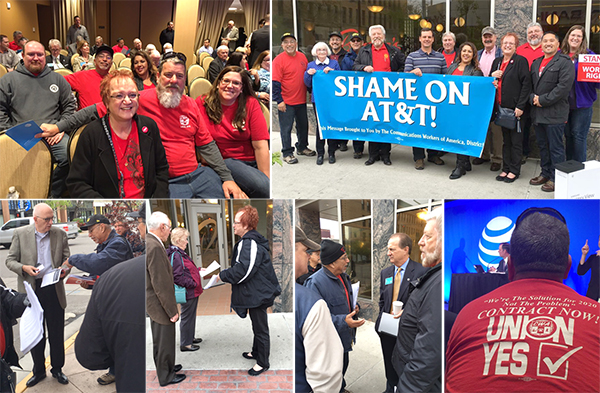 CWAers started early, leafleting AT&T shareholders beginning at 7 a.m., then moving inside for the annual meeting.

Dollar Thrifty Car Rental agents in Los Angeles voted for a CWA voice and Local 9003. The workers' committee was strong and stood together despite the company's captive audience meetings and other anti-union tactics. The unit includes 83 agents. Wynter Hawk, Local 9003, and Victor Serrano, special assignment organizer, worked on this campaign.

Today, CWA activists and allies held a National Day of Action to focus attention on Verizon's corporate greed. The 39,000 CWA and IBEW members remain on strike, pushing the company to stop offshoring jobs and to keep good jobs in our communities, so customers can get the quality service they deserve.

At the Verizon annual shareholders meeting in Albuquerque, 250 Verizon workers, CWA members and allies protested outside the meeting. Inside, CWA activists spoke on shareholder resolutions and presented more than 300,000 petitions from customers to CEO Lowell McAdam.

Later, 15 union members and community supporters were arrested after they draped a 70-foot banner reading "Verizon: Good Jobs, No Greed" across Rio Grande Blvd and then lay down on the banner to block traffic.

"As long as corporate executives put short-term profits ahead of the workers who make those profits possible and the communities they promised to serve, the calls for a change of course at Verizon will only grow stronger," said protestor Bianca Cunningham before she was arrested alongside fourteen other protestors for civil disobedience. Cunningham is a former Verizon Wireless worker who was fired in September while helping her fellow employees form a union. 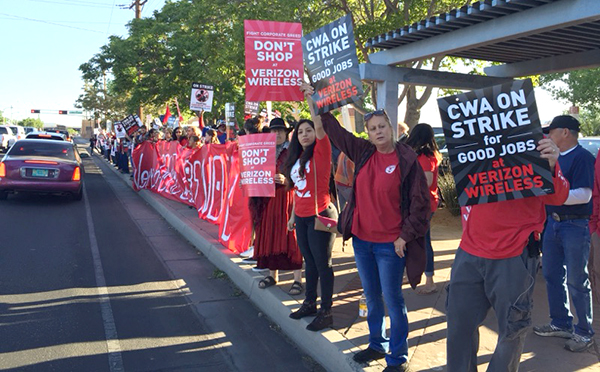 CWA members and allies demonstrate outside the Verizon annual meeting in Albuquerque.

Can you hear me now? Recently, Verizon CEO Lowell McAdam walked up to a picket line and told striking workers, "This makes no sense to anybody. To be honest, I'm not sure why you're out here." Betsy Derr, a customer service representative in Bloomsburg, Pa., accepted that challenge and offers up a clear explanation on Medium that's become one of the site's most popular articles.

CWA members are standing strong and mobilizing while working without a contract. Keep up with the latest here. 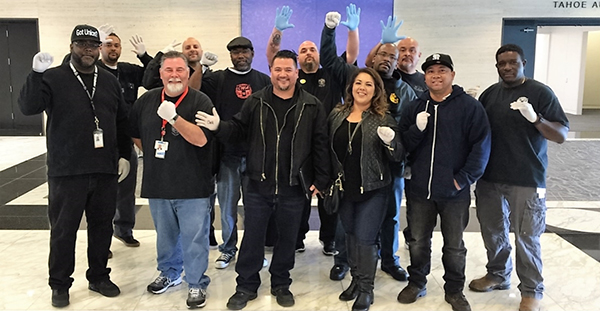 AFA-CWA Spirit Airlines Flight Attendants voted for a new contract with significant improvements covering more than 2,200 Flight Attendants. The agreement was reached with the assistance of the National Mediation Board.

"Spirit Flight Attendants made a collective decision that will carry us through the next five years. This contract moves us forward and establishes a strong foundation for our future," said Jorge Buchelli, AFA-CWA Master Eexecutive Council president at Spirit Airlines. "Spirit Flight Attendants play a key role in the winning strategy and record profits of this airline. AFA pressed hard for an agreement that recognizes our effort and dedication."

The five-year deal dramatically increases wages, locks in the best health insurance coverage for Flight Attendants in the industry and improves job protections and work rules.

A complaint filed this week at the Federal Communications Commission (FCC) charges Verizon Communications with systematically deceiving customers, refusing to fix the phone lines of customers on its traditional copper network, and forcing them to switch to the company's fiber network or lose all service. This practice is driven by an internal Verizon policy called "Fiber Is the Only Fix," according to the complaint, which was filed by public-interest groups, including CWA, Common Cause and Public Knowledge.

This is the first complaint alleging violation of the agency's copper retirement rules, which took effect on March 24, 2016. It charges that "Fiber Is the Only Fix" is an institutionalized policy designed to deceive customers and constitutes "unjust and unreasonable practices" that violate federal law. The complaint also charges that Verizon has been giving retail customers as little as 15-days notice before ending their copper service, when FCC rules say they must be given at least 90 days notice.

"By instituting this reprehensible policy to deceive customers, Verizon executives proved that only profits – not customer service – motivates this company," said CWA President Chris Shelton. "Verizon executives violated the law and are forcing our members to join in a program they strongly object to. With this complaint filed today at the FCC, we are standing up for our customers, just as we are standing up for them every day on picket lines from Massachusetts to Virginia."

Shelton added, "CWA fully supports the conversion from copper to fiber, but we believe that consumers should be able to make this choice without pressure, threats and deception from Verizon."

In Jacksonville, Bill Freeda, president of the Media Sector of the CWA Retired Members Council and a former NBCU/GE employee, said that the company's action ending medical coverage for retirees as of January 2016 made a sham of GE Chairman Immelt's message to retirees that, "we honor your service."

A coalition of labor unions led by IUE-CWA has filed a lawsuit against GE, charging that the company's action violated federal labor law and the Employer Retirement Income Security Act.

This week Greenpeace released a series of leaked documents on the ongoing Trans-Atlantic Trade and Investment Partnership (TTIP) trade talks, shining a light on the secretive negotiations that could lower standards governing workers' rights, the environment, public health and food safety.

Unfortunately, U.S. trade negotiators seem uninterested in using TTIP as a way to share prosperity among workers, corporations and communities in partner countries.

"It's the Trans-Pacific Partnership all over again, another trade deal being negotiated by and for the 1 percent," said CWA President Chris Shelton.

"Negotiators are looking to weaken workers' rights, environmental protections, consumer protections, and the ability of nations to act in the best interests of their citizens. There was some hope that TTIP could improve workers' rights in the U.S., and raise them to the standards that EU nations follow. The reports just made public by Greenpeace show that for U.S. negotiators, TTIP is business as usual, with corporations writing the trade deal to benefit their own bottom line."

"Because U.S. negotiators have refused to make their proposals available for public scrutiny, we're forced to rely on leaks for information. We share Greenpeace's concerns that TTIP is clearing the way 'for a race to the bottom in environmental, consumer protection and public health standards,'" Shelton said.

CWA has raised concerns that big banks are looking to use TTIP to roll back or side-step U.S. regulation of the banking industry, including the Dodd-Frank legislation, to benefit financial corporations on both sides of the Atlantic. The Investor State Dispute Settlement process, which would give more rights and privileges to corporations and investors, also has no place in TTIP or any other trade deal, CWA has declared. Several EU nations already have pushed back against the insistence of U.S. negotiators that this "secret tribunal" process be included in TTIP, and CWA and allies will continue to fight against the inclusion of these provisions in TTIP, as we did for TPP.

The Association of Flight Attendants-CWA also has pointed out that TTIP could give EU nations more access to the U.S. domestic market and increase foreign ownership and control of U.S. airlines, harming U.S. aviation, Flight Attendants' job security and aviation security.

If the U.S. Trade Representative truly wants to "position the U.S. and the EU to work together to push standards higher around the world," as it claims, negotiators should stop efforts to undermine existing EU standards that actually address environmental and public health issues. Working people in the U.S. and EU nations don't want another TPP.