Three weeks into the strike at Verizon, CWA and IBEW members are standing firm, picket lines are strong and we're determined to last one day longer than Verizon executives. Verizon requested that CWA and IBEW go to the bargaining table; we agreed. Our members are ready for whatever comes next. 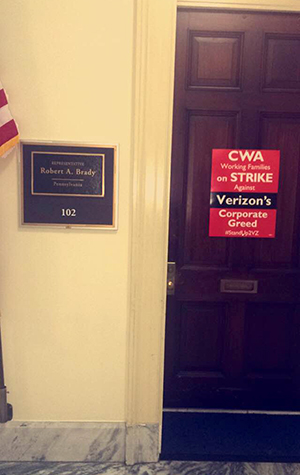 CWA Local 1101 Chief Steward Keith Hogarty writes, "For nineteen years, I've worked at Verizon's East 56th Street central office, across the street from a NYC public school. Every day, I walked past the students, never giving them a second thought. I assumed they felt the same towards me. They walked past me with textbooks and backpacks and I walked past with grievances and handbills."

Read more to learn what happened during our strike. 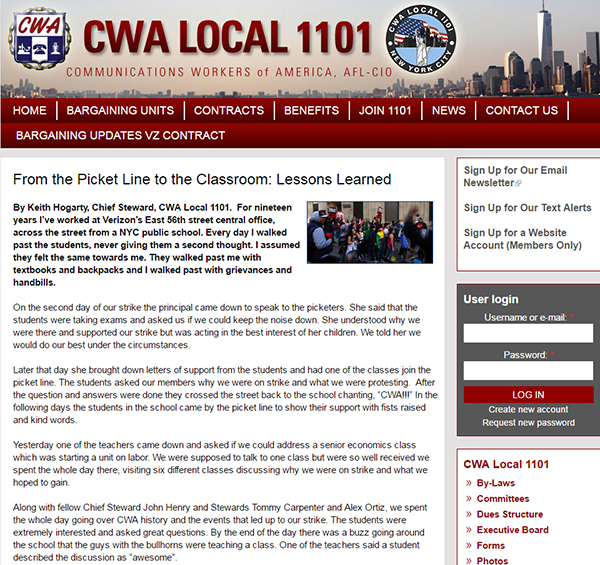 At the Chesapeake Complex in Silver Spring, Md., CWA members from across D2-13 rallied and called on Verizon management to get back to the bargaining table. 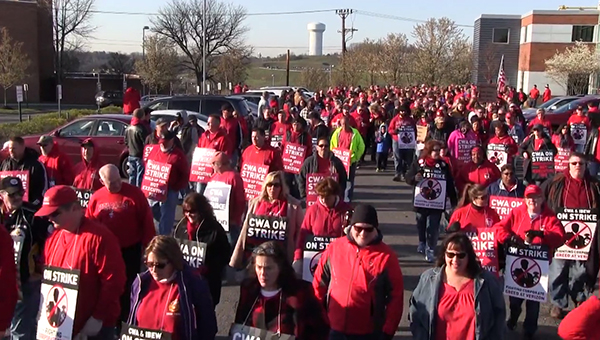 Members of CWA Locals 13500 and 13000 in Pittsburgh are
featured in this great video.

Meanwhile, CWA pointed out the dangers that managers were creating for themselves and the public in trying to do the work of highly trained CWA technicians and professionals. Basic safety practices aren't being followed as unqualified managers and contractors hang cables, place poles and operate heavy equipment throughout the Verizon footprint, from Massachusetts to Virginia. Read more here.

You can join the fight by sending this petition to Verizon CEO Lowell McAdam. 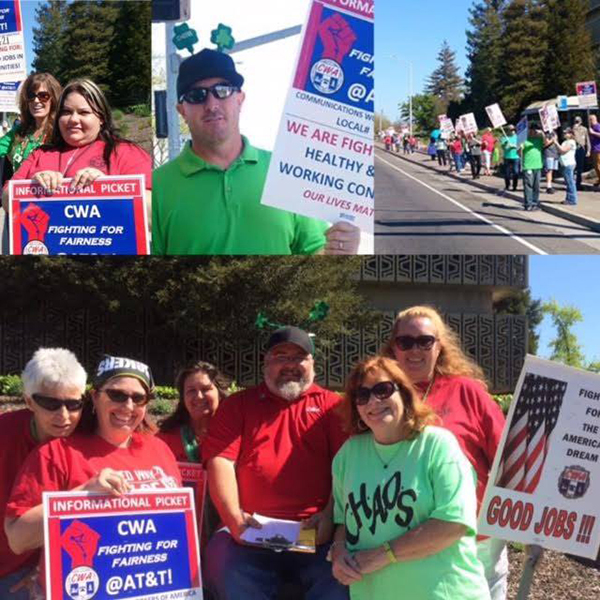 Envoy Agents Want a Fair Return on Their Work

On April 27, negotiations for a first contract covering 3,800 Envoy agents, CWA members, at 94 U.S. airports got underway in Irving, Texas.

Agents and allies rallied at the Dallas-Fort Worth International Airport to show their support for the bargaining team.

Last November, agents voted overwhelmingly for a CWA voice, so they could begin to close the wage and benefit gap between workers at regional operations like Envoy and parent company American Airlines Group.

Envoy agents staff the ticket counters, the boarding gates and baggage offices, and at smaller airports work on the ramp, guide planes to and from the outside gates and load and unload baggage. They're rallying around the slogan, "What's Our Worth," to remind management that agents are the face of American Airlines to passengers who they help connect to destinations every day.

Bloomberg Businessweek just exposed T-Mobile's attempt to fight a real union by creating a fake one.

In a sign of management's desperation to stop TU, T-Mobile launched its own company union called "T-Voice" in 2015. This copycat organization was "chartered" to be the employees' "voice" and address "pain points." Yet management funds this organization and has the power to disband it anytime it sees fit. T-Voice representatives aren't elected, but selected by management. In short, T-Voice is completely controlled by T-Mobile.

Workers weren't fooled, and this month, T-Mobile workers at five call centers are electing stewards for TU, the real union for T-Mobile workers in the U.S. and Germany. Two at-large stewards, representing call center and retail store workers, also will be elected.

CWA has filed charges with the National Labor Relations Board (NLRB), asserting that T-Voice is an illegal, "company-dominated" labor organization, an anti-union tactic that Congress banned in 1935.

"They're funding this sham union, and it is totally and absolutely illegal, and it is total and absolute nonsense," said CWA President Chris Shelton in an interview. "If they want to know what the problems are at T-Mobile, they could meet with folks who are elected by the people of T-Mobile and not by the CEO."

Businessweek points out that in the New Deal-era, businesses often set up their own fake unions to "sap support" from workers' bids to win an independent voice. William Gould IV, NLRB chairman under President Bill Clinton, said, "The idea was to take the wind out of the sails of employees who wanted a free union: 'Here, we've got a system of representation for you.'"

Since then, there have been a scarce number of "company unions."

While business groups have asked Congress to loosen the law, T-Mobile is the perfect example of why this ban needs to be upheld. "This is the equivalent of allowing Mexico to choose the U.S. trade representative," said Jody Calemine, CWA's general counsel. "I think it's common sense that that is a conflict of interest."

This "flags of convenience" model clearly violates the U.S.-EU Open Skies agreement. NAI is a Norwegian-owned company that holds an air carrier certification from Ireland, but does not fly to or from Ireland. NAI proposes using flight crew from Asia working on individual employment contracts.

"We will keep up our fight to stop the NAI foreign air carrier permit and work to ensure that our jobs and the Flight Attendant profession are not further undercut," Nelson said.

DOT to U.S. Workers: Everything Matters Except You

In an op-ed in The Hill, AFA-CWA President Sara Nelson urges members of Congress to affirm that the labor protections negotiated in the U.S.-EU Open Skies Agreement are "meaningful and not just a façade."

The Department of Transportation's decision to approve a foreign air carrier permit for Norwegian Air International flies in the face of the trade deal sold to the American people and Congress, says Nelson. The U.S.-EU Open Skies agreement specifically states that, "opportunities created by the Agreement are not intended to undermine labor standards or the labor-related rights and principles contained in the Parties' respective laws."

Congress's failure to act, she says, "will have catastrophic consequences for aviation workers across the country who work tirelessly every day ensuring that the flying public enjoys the safest aviation system in the world."

CWA Next Generation activists in higher education from California, Texas, Mississippi, and Tennessee met in Nashville this week for two intensive days of training on how to organize and lead student debt clinics for workers at their institutions.

More than 43 million people have student debt, and one out of every five of them is in default, meaning they've been unable to make a payment on their student debt for over a year. With that many people struggling, it's clear that the system is broken.

Student debt clinics provide members with information about government-sponsored programs to lower student debt payments or even forgive debt after a number of on-time payments. Some CWA members who've already attended clinics sponsored by the Next Generation program have seen their payments drop by hundreds of dollars per month.

Clinics also provide an opportunity to sign up and engage new members and build our movement to take on the big banks, stop privatization, and get money out of politics. All of these issues are at the center of the student debt crisis.

Tom Smith, lead organizer for United Campus Workers, CWA Local 3865, in Tennessee, said, "I feel immense relief about student debt after this training. I know now there is light at the end of the tunnel for my family and so many CWA members because of income-driven repayment plans and Public Service Loan Forgiveness. I'm really excited to share this incredible information with our members and to organize to change what is clearly a broken system."

Missy Benavidez, organizer with Texas State Employees Union, CWA Local 6186, said, "The training gave me a deep understanding that student debt is a collective problem that requires a collective solution. For too long, those of us with student debt have felt like it was our problem, that we shouldn't talk about it, and that we were powerless to change our situation. The training gave us tools to alleviate the often crushing student debt payments that millions of working people and families are struggling to pay. Through the union, we will build a powerful movement to solve the urgent problems we all face." 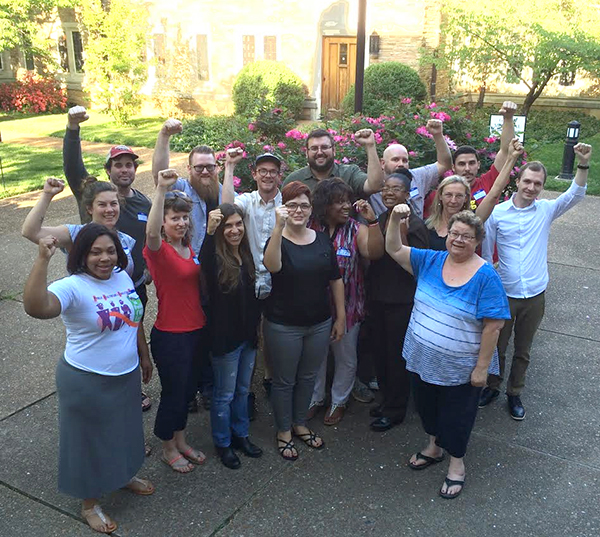 On Workers' Memorial Day and Every Day, CWAers Fight for Safe Jobs

CWA members marked Workers' Memorial Day with solemn remembrances of co-workers killed, hurt or sickened on the job, and determination to end the toll of workplace injuries.

"Many CWA members are exposed to job hazards, dangerous and stressful working conditions, and other job risks. Our union is fighting back against employers that cut corners, violate the law and put workers in jeopardy, and to make certain that government fulfills its responsibility to keep workplaces and working men and women safe," said CWA President Chris Shelton.

Today, CWA activists especially remember these members and others who were killed on the job over the past year: