CWA Members on Strike at Verizon

After nearly 10 months of trying to reach a fair contract with "Verigreedy," 39,000 CWA and IBEW working families went on strike as of 6 a.m., Wednesday April 13.

Elected officials across Verizon territory are rallying with striking Verizon workers, and CWA members were joined by AFL-CIO activists and other supporters as the strike continued.

Despite making record profits – $39 billion in profits over the last three years – Verizon executives have been pushing to offshore more jobs to the Philippines, Mexico and other locations, close call centers, outsource work to low-wage contractors and transfer workers away from their families for up to four months at a time.

Verizon workers also are frustrated with the company's continued refusal to meet its commitment to regulators and communities and build out high-speed FiOS broadband. Not only has Verizon failed to bring this telecommunications service to communities, it is failing to properly maintain the copper network, putting consumers and communities at risk.

Union members were out at 6 a.m. on Wednesday on picket lines from Virginia to Massachusetts. There were rallies, mass picketing, visits and messages of support from elected officials and community leaders and other shows of solidarity.

CWA President Chris Shelton joined members of Local 2222 picketing at a Verizon garage in Falls Church, Va., and told members that standing together, we will take on this greedy corporation and win. "We're going to show this company that we deserve a decent life for ourselves and our families," he said. 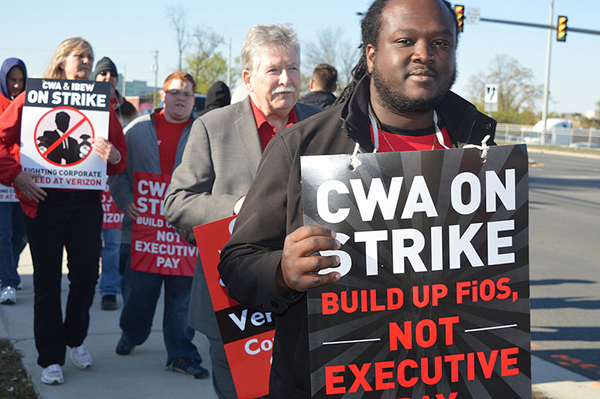 CWA President Chris Shelton on the picket line with members of Local 2222.

Check out more photos from the strike here.

"We're standing up for working families and standing up to Verizon's corporate greed," said CWA District 1 Vice President Dennis Trainor. "If a hugely profitable corporation like Verizon can destroy the good family-supporting jobs of highly skilled workers, then no worker in America will be safe from this corporate race to the bottom."

CWA District 2-13 Vice President Ed Mooney said Americans are becoming outraged, "by what some of the nation's wealthiest corporations have done to working people over the last 30 years. Verizon is the poster child for everything that people in this country are angry about, because this very profitable company wants to push people down."

Keep up with everything happening in the Verizon strike. Check standuptoverizon.com for a map of events, and join a picket line in your area. Check in on the CWA app, a great place to find events and photos. If you haven't downloaded the app yet, click here. Take action and sign the petition.

On Day One of the Verizon strike, more than 27,000 people jammed Washington Square Park in New York City for a "Bernie Sanders for President" rally. Front and center were 150 Verizon strikers, and CWA President Chris Shelton who said working people were supporting Bernie Sanders because they want a president who will stand up for them and for keeping good jobs in the U.S. 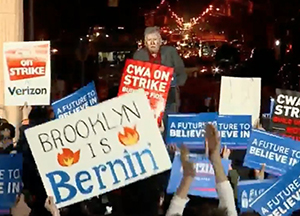 Earlier that day, Sanders joined a crowd of 2,000 CWA Verizon and Verizon Wireless workers and supporters on the picket line in Brooklyn, N.Y., on Day One of the strike (watch below) and met with stewards and members of CWA Local 1122 in Buffalo before the strike, telling them, "I want to thank you for standing up to the outrageous greed of Verizon and corporate America. When you do that, you're not just standing up for your own members – you're standing up for working people all over this country." 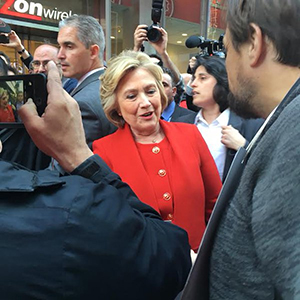 Democratic presidential candidate Hillary Clinton stopped by a Verizon Wireless store picket line on West 42nd St., in Manhattan. She issued this statement: "I am disappointed to learn that negotiations have broken down between Verizon and their workers, represented by the Communications Workers of America and the International Brotherhood of Electrical Workers. Verizon should come back to the bargaining table with a fair offer for their workers."

Elected officials joined CWA members on picket lines and at rallies in many locations, including Brooklyn and Suffolk County, N.Y.; Newark, N.J.; Dover, DE, and many Maryland and Virginia sites. Read more at http://standuptoverizon.com and the StandUp2VZ Facebook page.

Report from the Front Lines

Two members of CWA Local 2108 at the Gaithersburg, Md., garage were hit by a Verizon management attorney driving his Porsche. That says it all, doesn't it? One member was not seriously hurt, but the second was taken to the hospital. Another CWAer from Local 2108 who works at the Chesapeake Complex call center in Silver Spring, Md., also was hit by a management vehicle while on the picket line.

In Philadelphia County, Pa., a Verizon manager had a confrontation with a police officer and ignored the officer's direction to stop. The manager tried to drive away but was later arrested. 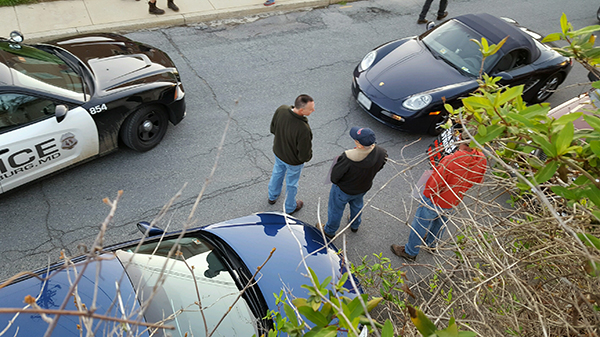 Outside the Gaithersburg, Md., Verizon facility, police investigate a manager for hitting two strikers with his Porsche.

The 15,000 CWA workers at AT&T West are working without a contract after their collective bargaining agreement expired on Sunday.

CWA had a message for the crowd at AT&T Park in San Francisco for the start of the baseball season. Photo courtesy of CWA Local 9410 Vice President Roland Andersen.

"We're going to continue fighting for a fair contract while we stay on the job," said CWA District 9 Vice President Tom Runnion. "For weeks we have called on AT&T West to get serious about bargaining and negotiate a fair agreement for its workers. Our members showed their determination to achieve a fair contract with over 95 percent voting to authorize a strike if necessary. That remains an option."

AT&T is a very profitable company and its $49 billion purchase of DirecTV closed last July. However, in bargaining for the workers who have helped make it successful, AT&T is demanding outrageous concessions.

CWA members are mobilizing across District 9, putting the company on notice that they're serious about getting a good contract. Negotiations cover workers at AT&T West in California and Nevada. 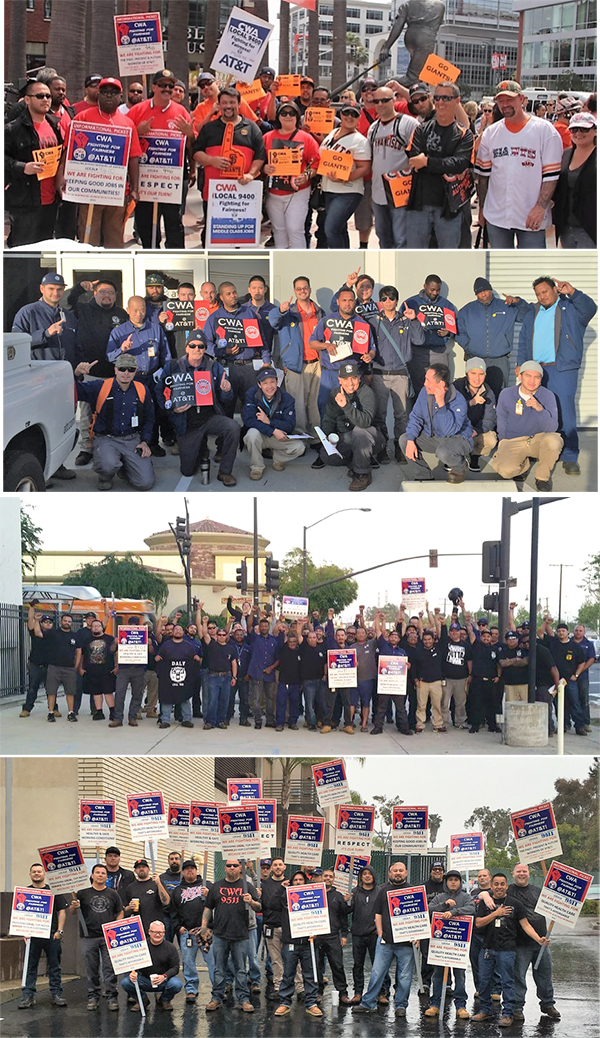 The agreement covers about 9,400 workers in Arkansas, Kansas, Missouri, Oklahoma and Texas.

Workers Worldwide Fight for $15 and a Union 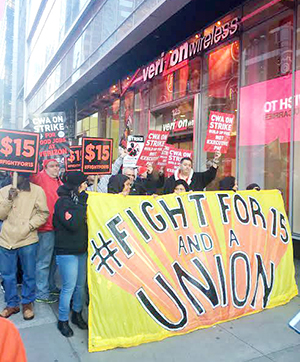 Verizon strikers join the Fight for $15 and a union. In New York City and many locations, protesters march past Verizon Wireless stores.

CWA activists joined thousands of workers today in the biggest Fight for $15 day of action of all time. In 300 U.S. cities and 40 countries, workers flooded the streets in solidarity for what they rightly deserve – $15 an hour and a union.

On the eve of Tax Day, workers put a spotlight on the wealthy corporations that are ripping off working families. Big corporations are manipulating the rules to avoid paying their fair share of taxes. And because they pay such meager wages, many of their employees are eligible for government benefits, meaning that taxpayers and communities end up footing the bill.

Today's protests show that this is a growing, expanding movement. It isn't just about fast food any more. In every industry – retail, manufacturing, customer service, academia and more – workers and communities face impossible choices over how to care for their children and elderly parents and how to meet their basic expenses.

Workers building buses at a New Flyer plant in Anniston, AL, wore Fight for $15 stickers to work as they continue their organizing drive. These assembly line workers and welders are currently earning significantly less than IUE-CWA-represented employees building the exact same New Flyer buses in Minnesota.

We know we can win. We're holding corporations accountable and workers are lifting themselves out of poverty. Today's protests come hot on the heels of the biggest week in this campaign's history. New York State won $15. California won $15. And Pennsylvania nursing home workers and hospital workers won $15, too.

Our Goal is a Democracy Where Every Voice is Heard

Over the weekend, more than 300 CWA members will be participating in Democracy Awakening, a mass mobilization of thousands of Americans calling for a democracy that works for all – not just the 1 percent. We'll be rallying, marching, attending teach-ins and lobbying. Then on Monday, activists will be engaging in civil disobedience outside the U.S. Capitol.

CWA President Chris Shelton is among the CWAers standing up for a democracy where every voice is heard and every vote counts. "We know that on our own, CWA cannot restore workers' rights or win the financial reforms we need to put working families back on track. The same is true for the critical issues facing environmental groups, consumer advocates and social justice activists. We can't go it alone. But when we join together, as we have in the past, we can move our democracy forward. We know this. When every organization makes restoring our democracy at least its second most important issue, we can succeed," Shelton said.

CWA joins more than 260 organizations in this landmark event coordinated by the Democracy Initiative, calling for strengthened voting rights, campaign finance reform, getting big money out of politics and filling the vacant seat on the U.S. Supreme Court. This is a broad coalition of organizations representing the labor, green, student, racial justice, civil rights and money-in-politics reform communities. It's not too late to join in. Learn more at democracyawakening.org.