Here are just the latest groups of workers to sign up for CWA membership:

In District 3, at La Vergne and Knoxville, Tenn., locations, 201 DirecTV/AT&T technicians have joined our union, with 80 percent of them signing CWA membership cards at the same time.

In District 6, the 985 workers at the Tulsa, Okla., DirecTV customer care center now have representation by CWA Local 6012.

Malena Ponder works at the Tulsa customer care center. She said, "We need CWA to represent us because we are playing with a new set of rules now. We need to make sure that we have a voice and that those rules are upheld for everyone. We need the consistency and transparency that only a consolidated workforce can provide. With an almost 70 year relationship, CWA is that consolidated workforce. They are our voice and AT&T's conscience."

Byron Hopkins, another customer care center worker, said, "CWA already has a long time relationship with AT&T and as a DTV employee I want CWA to be my voice."

There was great support throughout the district, from District Organizing Coordinator Tammy Chaffee in Kansas and Missouri, Area Director for Organizing Judy Graves who coordinated the campaign, and District 6 Vice President Claude Cummings who supported the campaign in every way, meeting early-on with DirecTV workers and negotiating the card check and neutrality agreement details with the company. 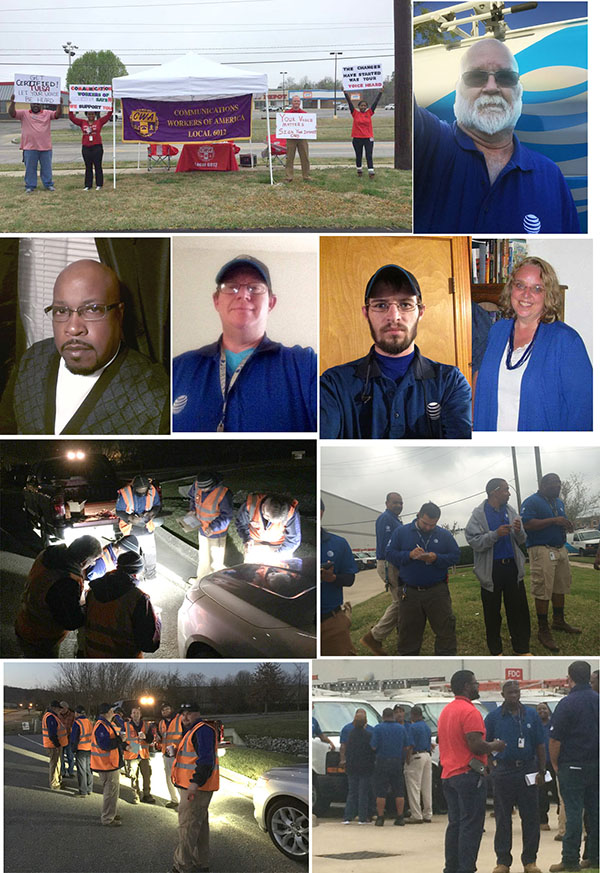 Top row: Workers at the Tulsa customer care center sign up for a voice with CWA Local 6012; Ed Kimpel, a tech from La Vergne, Tenn.

Last night, Senator Bernie Sanders joined CWA members rallying outside the Verizon building in Philadelphia. He called out the company for being more "concerned with compensation packages for CEOs than about the needs of hard working people who want nothing more than to be able to live in dignity and security and bring their kids up in a decent way."

"It is not acceptable to me that when workers form a union and negotiate for an entire year they can't yet get a contract. That's not what democracy is supposed to be about. That's what rotten labor law is about, and we're going to change that," Sanders said. 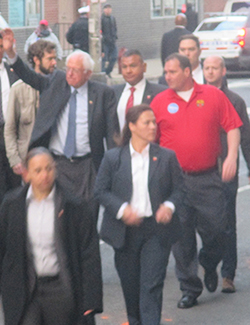 Hundreds of CWA and IBEW members rallied to put Verizon on notice: it's time to get serious about bargaining. CWA District 2-13 Vice President Ed Mooney blasted Verizon's proposal to contract out and ship even more jobs overseas and the company's demand that technicians be forced to work in other states for long period of time, away from their families and children.

Last week, CWA members rallied, leafleted and protested across Verizon territory in several days of "Stand Up to Verizon" actions.

More than 600 CWAers, members of Local 1101, 1102 and other downstate locals, rallied in front of the company's headquarters, calling on Verizon to negotiate a fair contract. They were joined by local elected officials, union allies and other supporters.

Lots of elected officials were there to show their support, including New York City Comptroller Scott Stringer and CounciL Member Ben Kallos. Union allies included the president of the New York State AFL-CIO, who told Verizon members, "You are not alone in this fight," and other union activists and leaders.

Local 1101 President Keith Purce said Verizon still had concessionary demands on the table, despite making $1.8 billion a month in profits, and thanked the members, "who continue to fight for what's right every day." Local 1102 President Steve Lawton talked about the dignity and respect CWA members deserve, and the fight to win those rights on the job every day. And Pat Welsh, head of District 1's Retired Members Council and a Local 1101 retiree, acknowledged the retirees who keep coming to rallies and protests and pickets, because they know this "fight is their fight too."

From Virginia to Washington, D.C. to New Jersey, at "Stand Up to Verizon" actions, CWAers protested Verizon's greed and its refusal to bargain a fair contract. Outside Verizon Wireless stores and at other locations throughout District 2-13, CWA activists, Jobs with Justice supporters and other allies called for "good jobs, not corporate pay." 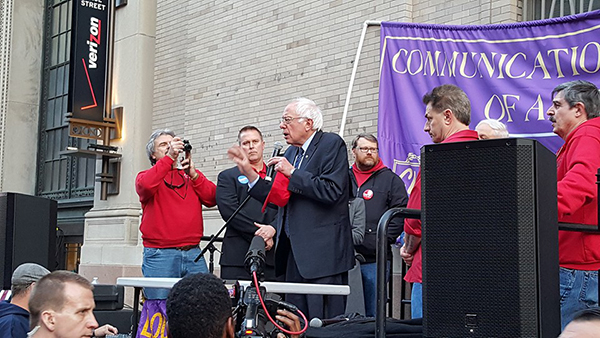 Senator Sanders makes clear which side he's on, joining CWA members at a rally in Philadelphia.

Clockwise, from top: Members of Locals 2222, 2336 and 2300, plus Jobs with Justice activists; calling out Verizon greed; Local 13000 say "we need a contract;" members of Local 1000 in Hamilton, N.J.; "Stronger together" was the message from Local 1000; CWA Local 1103 President Kevin Sheil at the "Stand Up to Verizon" rally; members of Local 13500 East; Local 1101 members rally outside Verizon headquarters; Members and retirees of Local 2201; Local 2201 members call for good jobs,
not extreme executive pay.

"Senator Bernie Sanders's core message that we can have an America that works for all of us has caught fire and continues to energize working families, first time voters, young people, independents, even conservatives," said CWA President Chris Shelton. "Across the country, Sanders' message is resonating. Working people get his call for fair trade, not corporate giveaways. We agree with the goals of getting big money out of politics, ending 'too big to fail,' requiring the wealthy to pay their fair share and restoring income equality and fairness. That's why he's won in Wisconsin and why he will win going forward."

CWA activists were "boots on the ground," making phone calls, walking neighborhoods and working to get out the vote. In Milwaukee, CWA Staff Rep Clinton Rodgers joined Sanders on stage at a town hall. Watch it here.

Now, as the campaign moves to New York, where voters go to the polls on April 19, CWAers continue to mobilize. Our members are on track to make more than 60,000 phone calls and have been regularly canvassing neighborhoods from Brooklyn to Staten Island to Buffalo and everywhere in between. A telephone town hall set for April 11 will highlight even more CWA member actions and get-out-the-vote plans.

CWAers also are gearing up in California, where voters will cast ballots on June 7. Recently in Fresno and Bakersfield, CWA activists led hundreds of people in marches for Sanders. 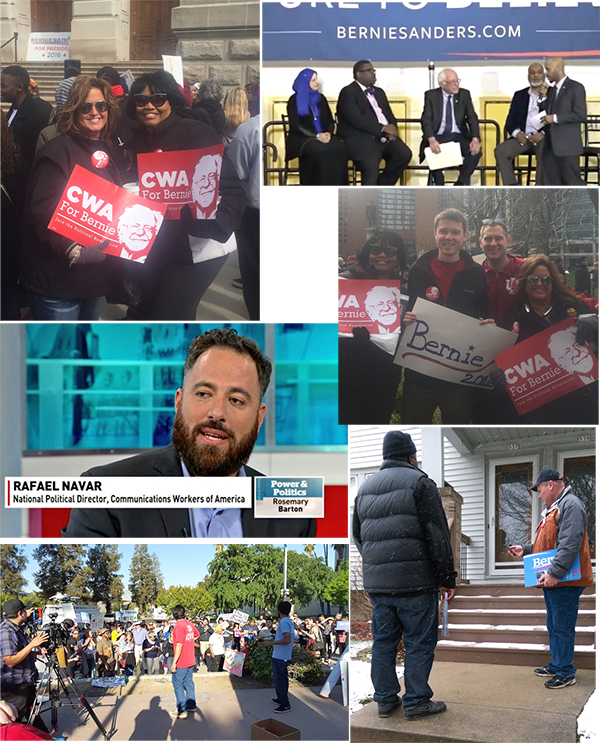 CWAers are feeling the Bern. Clockwise, from left:

At the Wisconsin town hall with Senator Sanders, CWA Staff Representative Clinton Rodgers talks about growing up in Milwaukee.

In Bakersfield, Calif., more than 200 CWAers and Sanders supporters march
through the city.

It was a big CWA night in Wisconsin this week. In addition to Senator Bernie Sanders winning big in the Democratic primary, two CWA members were elected to local offices. 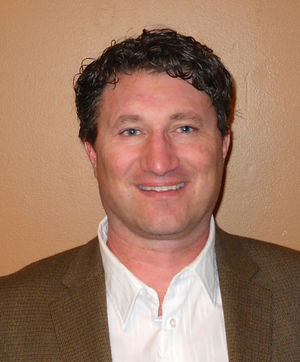 Rob Boelk, president of CWA Local 4622, was elected Mayor of Mayville by a wide margin in a highly contested race.

He has served as local president for the past eight years. Previously he was elected as Ward 5 Alderman for the city of Mayville, and has been serving as president of the Common Council.

In a letter to CWA supporters, Rob wrote, "Not many union members or officers run for these political races, however, I am stepping up and taking on the challenge not only for working people, but for the elderly, poor, and young."

Jens Jorgensen, a member of CWA Local 4603, was elected to the Janesville City Council. The 19-year-old – an AT&T Mobility member – is the youngest person on record to be elected to the City Council. Of the seven candidates vying for three seats, Jens won the greatest number of votes. He is the son of Wisconsin State Representative Andy Jorgensen.

CWA President Linda Hinton said both leaders will be effective champions for working families in their communities.

"When we join together, as we have in past fights, we can move our democracy forward. We know this. When every progressive organization makes restoring our democracy at least its second most important issue, we can succeed," he writes.

Read his full essay here and add your own #MyDemocracy story!

Just One Week Until Democracy Awakening

More than 300 CWA members and leaders are coming to Washington, D.C., for three days of "Democracy Awakening."

Busloads of CWAers from Virginia, North Carolina and New Jersey, and NextGen activists will join thousands of other participants from more than 250 groups. The April 16-18 events will include teach-ins and workshops, a rally and prayer vigil and a day of mass civil disobedience on April 18 to save our democracy. CWA President Shelton and other CWA activists and leaders will engage in civil disobedience. Learn more at www.democracyawakening.org/cwa.

CWA commended the Federal Communications Commission (FCC) for voting to modernize the Lifeline program by including broadband access. Since the start of our Speed Matters program nine years ago, CWA has pushed for the expansion of the Lifeline program to help bring about digital equality and support high-speed Internet service for all.

Broadband is essential to full participation by all Americans in today's economy and society. The activities of daily life increasingly require Internet access – job applications are online, students need home broadband to do their homework, and families are staying connected through social media.

"This subsidy is an important step toward ensuring that all Americans can share in the benefits that broadband access provides," said CWA President Chris Shelton. "We applaud the leadership of Chairman Tom Wheeler and Commissioners Mignon Clyburn and Jessica Rosenworcel in moving forward to help close the digital divide. CWA will continue to work for universal broadband access for all."

Read Shelton's Medium post about the 64 million Americans who are stuck on the wrong side of the digital divide here.

Applications for CWA Joe Beirne Foundation scholarships for the 2016-2017 school year are now being accepted through April 29.

Fifteen winners, selected in a lottery drawing, will receive a partial college scholarships of up to $3,000 each, as well as second-year scholarships of the same amount contingent upon satisfactory academic achievement.

CWA members, their spouses, children and grandchildren (including dependents of laid-off, retired or deceased CWA members) may apply. Applicants must be high school graduates or high school students who will graduate during the year in which they apply. Undergraduate and graduate students returning to school may also submit applications.

Named for CWA's founding leader Joseph Anthony Beirne, this valuable scholarship program has been built up by contributions from CWA Locals, members and officers. The CWA Joe Beirne Foundation was established in October 1974 by the CWA Executive Board to honor Beirne's lifelong commitment to education and progressive social causes.