By 80.65 percent to 19.35 percent, CWA state workers voted to increase their dues by 50 cents per week so that they could successfully fight back against the attack on pensions and health care by Governor Chris Christie (R).

The campaign will include an unprecedented, statewide member education campaign, aimed at mobilizing some 800,000 active employees and retirees. CWA volunteers will go door-to-door to talk with other union members, and a media/public communications campaign will make the case to New Jersey's nearly 4 million voting residents. More than 500 CWA job stewards and activists already have joined mobilization training. The amendment will be on the November ballot. 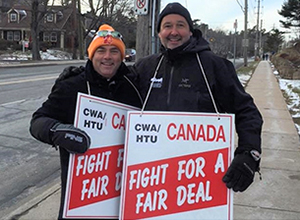 CWA Canada Locals across the country are gathering donations and messages of support for workers at the Halifax (Nova Scotia) Chronicle Herald who have been on strike for nearly seven weeks.

Last week, members of the government and general employees' union, postal workers, longshoremen and other unions joined the picket line to show their solidarity.

The CWA District 2-13 bargaining team reached a tentative four-year agreement with Comcast covering about 300 technicians and other workers in Pittsburgh. The agreement provides for retroactive pay, starting from May 21, 2015, and calls for an across-the-board wage increase of 2 percent, plus additional wage adjustments.

Other improvements were reached covering overtime, workload, holiday schedule, the grievance and arbitration procedures and other issues. CWA members will vote on ratification on March 13 at the CWA District 2-13 office in Bridgeville, Pa.

AT&T Mobility members in District 6 tuned in to a video/telephone town hall with the bargaining team and District 6 staff on March 7, to get details and ask questions about the tentative agreement.

The agreement covers about 9,400 workers in Arkansas, Kansas, Missouri, Oklahoma and Texas; a mail ratification vote will conclude on April 14.

Strong and consistent opposition to free trade deals that offshore workers' jobs and destroy their communities was how Senator Bernie Sanders overcame misleading polls to win the Michigan Democratic primary on March 8.

Exit polls conducted by all the campaigns showed broad and deep opposition to business-as-usual trade policy shared by Democrats, Republicans and Independents.

Exit polls showed three-fifths of voters believed trade deals were more likely to take away jobs, and those Michiganders supported Sanders by a margin of more than 10 points.

CWA members will continue to support Sanders as he challenges Wall Street and bad trade deals that have rigged our economy in favor of corporate interests and the 1 percent. In upcoming primary contests – particularly in our member-heavy states of Ohio, New York, New Jersey and California – CWA activists will be canvassing neighborhoods, organizing worksite actions, staffing phone banks and rallying around this amazing grassroots revolution. 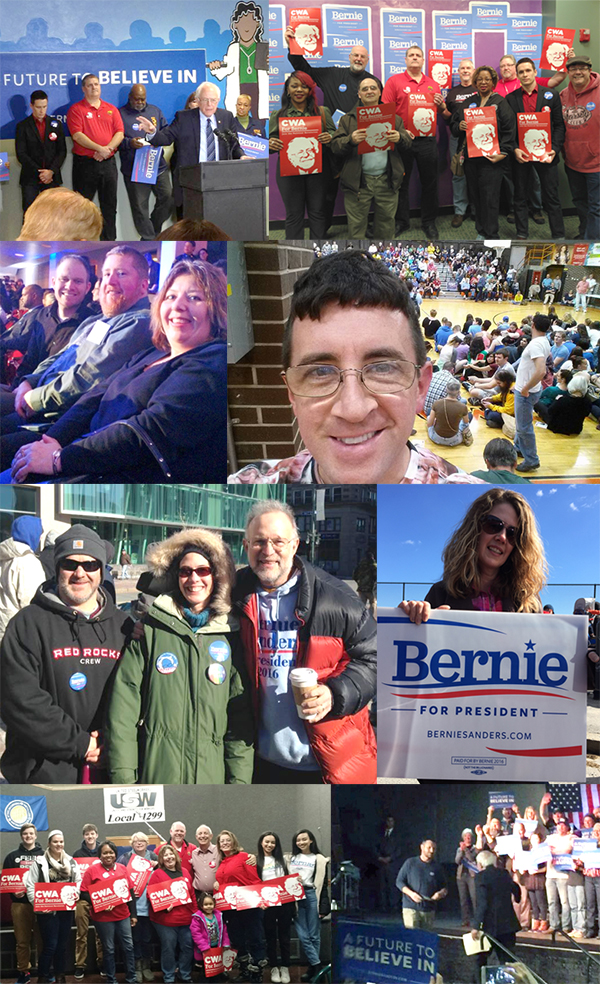 More on the Democracy Awakening Events in Washington, D.C. April 16-18.

Saturday, April 16 will feature teach-ins, workshops and direct action trainings by leaders from the 180 groups that have signed on to this fight.

On Sunday, April 17, activists will rally for Democracy and march around the U.S. Capitol. The rally begins at 1 pm at 3rd St. NW in front of the Capitol reflecting pool. After the march, participants will hold a faith rally and prayer vigil in front of Union Station, beginning at 4:30.

Monday, April 18 is a day of mass civil disobedience to save our democracy, along with advocacy and lobbying on Capitol Hill. Together we're pushing for a Congress of Conscience – one that stands up for our democracy rather than stands in its way.

An intense campaign by AFA-CWA has resulted in the Senate introduction of the Stop Trafficking On Planes (STOP) Act, to fight human trafficking with proper training for aviation workers. Senators Amy Klobuchar (D-MN) and Mark Warner (D-VA) introduced the bill this week. Similar bipartisan legislation, the Secure Our Skies Act, was introduced in the House last month by U.S. Representatives Dina Titus (D-NV-01) and Barbara Comstock (R-VA-10).

"Everyone recognizes the horror of human trafficking, but we must turn our outrage into action," said AFA-CWA International President Sara Nelson. "We commend Senator Klobuchar and Senator Warner for introducing this legislation that will allow us to stop traffickers from using our skyways as a means to transport innocents to a life of slavery. Trained Flight Attendants can serve as 100,000 eyes in the skies to save lives by recognizing and reporting signs of trafficking."

The bill requires training for Flight Attendants and pilots of air carriers to identify and report human trafficking.

Connecting the Dots Between Voters and Unfair Trade

In a press statement, CWA pointed out that working families are clear in their rejection of the Trans-Pacific Partnership:

The March 8 presidential primary results are the latest evidence that the American people will not accept the Trans-Pacific Partnership (TPP). Voters rightly see the TPP as another trade deal in a string of many that would enrich big corporations at the expense of working families and their communities.

The TPP's chance of passing Congress was already on life support, and last night's primary results are another sharp lesson to elected officials, if they are paying attention. As exit polls showed, opposition to business-as-usual trade policy is broad and deep and shared by Democrats, Republicans and Independents.

The message to elected officials and candidates is clear: if you want to stand with the American people, you must take a stand against the TPP.

A new analysis by the Economic Policy Institute found that the United States already is running a rapidly increasing trade deficit with the 11 other countries that would form the Trans-Pacific Partnership.

A driving force behind this growing trade gap is the lack of measures to address the currency manipulation of U.S. trading partners. The TPP has no language to deal with currency manipulation, which occurs when a country artificially depresses the value of its currency to boost its exports and make imports from the U.S. and other countries more expensive, EPI said.

Broadband is essential to full participation in today's economy and society. Students need home broadband to do their homework, and job applications are now online. While 92 percent of households with incomes over $100,000 have broadband service, only 47 percent of households with incomes below $25,000 subscribe to broadband. Updating the Lifeline program to include broadband will help close the digital divide and foster digital equality.

To be eligible for the subsidy, carriers must provide broadband service at a minimum speed of 10 megabits download and 1 megabit upload. The FCC will issue its final rule on March 29.

On Workers' Memorial Day, union members and allies remember those who have been killed, injured and sickened on the job, and focus on what needs to be done to make our jobs safer.

The AFL-CIO is spearheading the fight this year, calling for work that is safe and healthy, and that pays fair wages.

Here are some ways to observe Workers' Memorial Day: 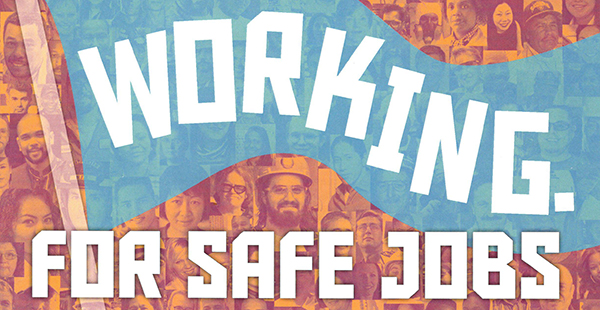 The ver.di members held up signs of support, while TU members in the U.S. dressed as Rosie the Riveter, sharing their photos and messages on social media.

T-Mobile Workers United (TU) is the local union for T-Mobile and Metro PCS workers to gain a voice and fair treatment on the job.

TU members have been fighting back against T-Mobile's illegal "gag orders" that tried to stop the company's 46,000 workers from talking to each other about workplace issues. Last year, the National Labor Relations Board found that T-Mobile illegally prohibits its employees from discussing the terms and conditions of employment with their co-workers and others. At locations in at least South Carolina and Maine, the company had been requiring employees to sign a confidentiality agreement whenever it conducted an internal investigation, including incidents of sexual harassment. 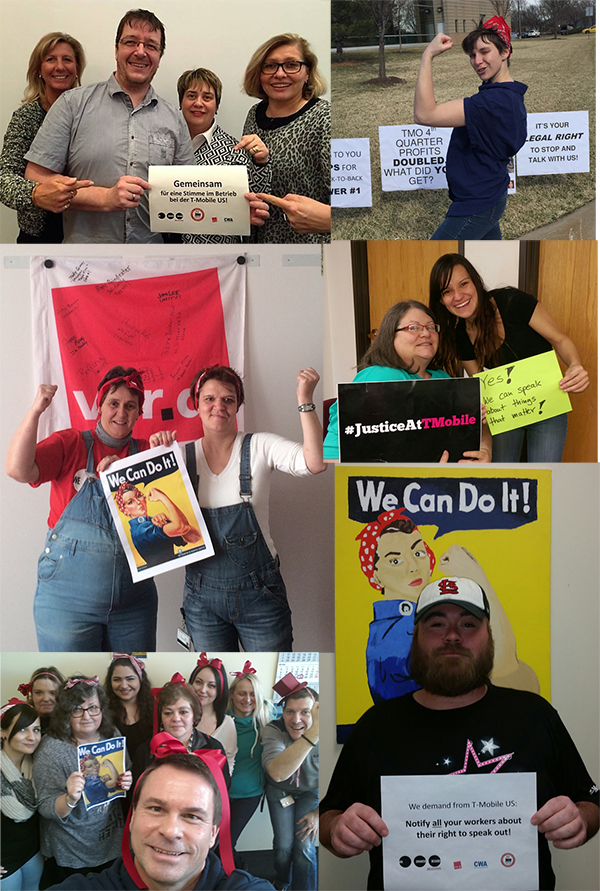 From Brühl, Augsburg and other CWA partner locations in Germany to Wichita, Kans., Albuquerque and Springfield, Mo., T-Mobile workers marked International Women's Day by putting the company on notice: 'We have the right to speak out!"