'We'll Fight for the Grassroots Revolution Our Country Needs'

CWA President Chris Shelton issued this statement on the results of the Super Tuesday primaries:

Members of the Communications Workers of America voted decisively to endorse Bernie Sanders for President, knowing that we were in it for the long haul. Like Senator Sanders, we are determined to take on today's one-sided economy, where political contributions wipe out the voice of ordinary Americans and where Wall Street calls all the shots – about our jobs, our communities and our livelihoods.

That's what the Sanders campaign is all about. We're not going anywhere. We continue to support Senator Sanders' campaign that calls out an economic and political establishment that's rigged against working families.

Bernie Sanders is the only candidate whose campaign is funded by the small dollar contributions of ordinary Americans. That matters. He has energized millions of voters with his message of fundamental change that benefits working families, not the 1 percent, and the fight isn't over.

In the coming primary states, and especially in California, New York, New Jersey, and Ohio – where CWA has its largest numbers of members – activists will continue to canvass neighborhoods, organize worksite actions, staff phone banks, and rally around Senator Sanders and the grassroots revolution our country needs.

CWA members will be joining a telephone town hall call on Monday, March 7, to get more information about the tentative contract. Read more here.

The settlement will be presented to the membership for a ratification vote. 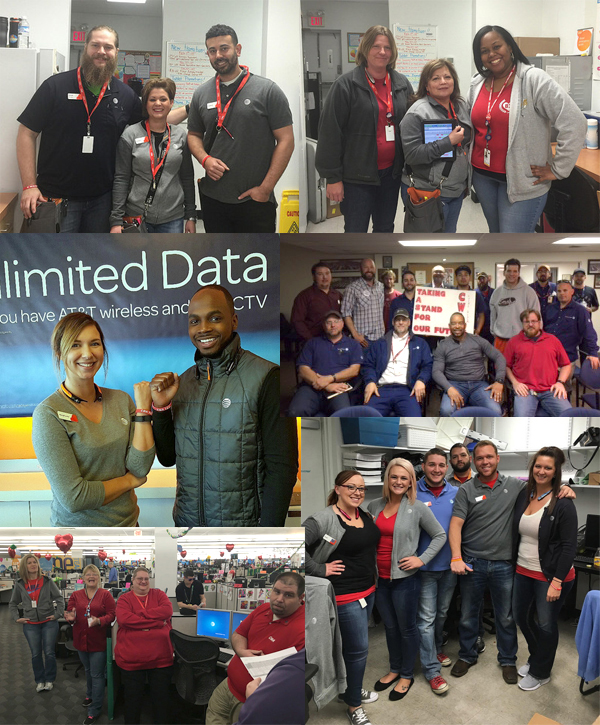 Across District 6, Mobility workers mobilized at retail stores and call centers, putting the company on notice: "these shoes were made for walking." 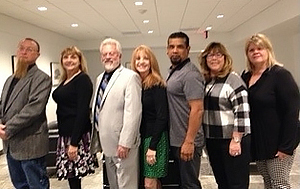 Negotiations between CWA District 9 and AT&T West got underway on Feb. 23. CWA D9 Vice President Tom Runnion made it clear to AT&T that CWAers were fighting for fairness and, "our goal in these negotiations is to improve living standards for our families. We want secure jobs, secure health care and a secure retirement." The contract covers about 16,000 workers.

So far, the company has come back with demands for givebacks – looking to cut pay schedules, holidays and vacations, freeze pensions and eliminate protections from excessive monitoring, among other retrogressive demands. 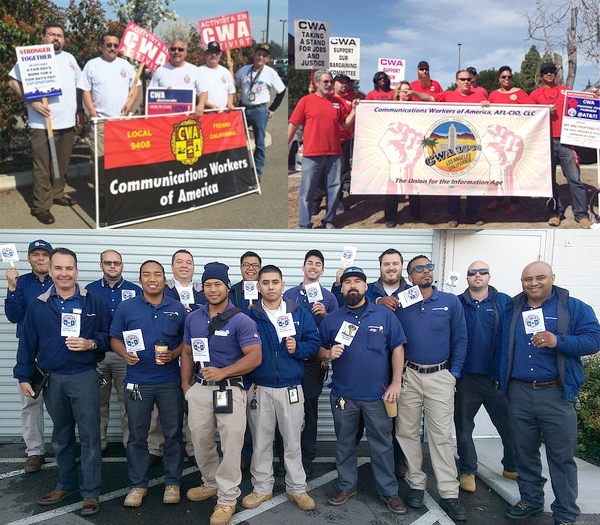 The JNC's goal is to continue to build on progress in previous mediation sessions and work through critical issues including scheduling, sick leave, vacations, job share/partnership and other issues, then work to resolve the economic issues to reach a joint agreement covering all United Flight Attendants. The next round of bargaining is March 7 in Phoenix.

On February 18, more than 400 Flight Attendants joined the Day of Action at Chicago O'Hare International Airport, picketing outside the United Airlines departures area. They were joined by Flight Attendants from American, Southwest, ExpressJet and Envoy and AFA-CWA's flying partners from the Air Line Pilots Association. 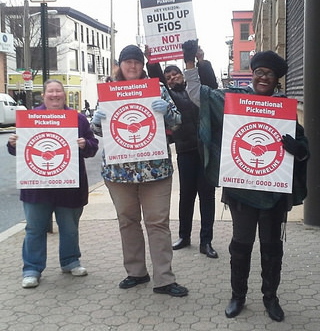 In informational picketing In Dover, Del., members of Local 13100 tell the public that "Verizon should build up FiOS, not executive compensation."

CWA bargainers reached a two-year contract extension with Avaya that provides for a 2.5 percent wage increase, the first non-lump sum pay raise since 2012. The contract covers about 550 workers at Avaya.

CWA Telecommunications and Technologies Vice President Lisa Bolton said the contract continues to maintain current health care coverage. "There are no givebacks in this agreement," she said.

More than 500 CWA N.J. shop stewards and activists met for a day of mobilization training on the campaign to win a ballot question for a constitutional amendment to require the State of New Jersey to make full payments into the pension system.

This is an unprecedented, statewide member education campaign, aimed at mobilizing some 800,000 active employees and retirees to drive support for the constitutional amendment.

Governor Christie had signed a 2011 law requiring the state to do its part in restoring proper funding for the pension system, after forcing pension cuts for workers. But he reneged on the deal, grabbing billions of dollars from the pension system to reduce his budget shortfall.

CWA and other unions filed a petition for review with the U.S. Supreme Court. The U.S. Supreme Court declined to hear the case, meaning the lower court decision stands. "It just means what we already knew, which is that we have to protect the funding for these pensions by giving these pensions the same protections they would have in the private sector," said CWA New Jersey Director Hetty Rosenstein.

CWA stewards and activists are ready to go out and build support for the constitutional amendment to safeguard public worker pensions. CWA is leading the way on the campaign.

Flight Attendants in uniform will "Rally for Rest" at the U.S. Capitol in Washington, DC, on March 16, then lobby members of Congress to get these critical changes included in the Federal Aviation Administration (FAA) re-authorization.

Flight Attendants are entrusted with the safety, health, and security of passengers. But they're often asked to perform duties during their "rest" time, resulting in getting less rest than required. Airline Pilots and other flight deck crew are covered by a 10-hour minimum rest requirement. But Flight Attendants right now have just an eight-hour rest period between 14-hour days, AFA-CWA said.

Thousands of people from at least 180 organizations, including CWA, will mobilize in Washington, DC, this spring for Democracy Awakening, demanding a democracy where every vote is heard and counted and all Americans have an equal voice.

From April 16-18, thousands of working people will participate in Democracy Awakening events, including a "Rally for Democracy" protest and march, a "Congress of Conscience" sit-in, other direct action, advocacy at the U.S. Capitol, and teach-ins over the three days.

The goal of this landmark mobilization is to press for needed reforms like getting big money out of politics and not suppressing the right to vote. That's the only way we can have a democracy that works for all Americans.

Mark your calendar for Apr. 16-18. Learn more at democracyawakening.org.

Listen to the call here.

U.S. Representatives Keith Ellison (D-Minn.) and John Sarbanes (D-Md.) had a great discussion about how big money in politics is blocking a progressive agenda for working families and how it ties in with the assault on voting rights and civil rights.

Ellison and Sarbanes are among the leaders in the House of Representatives who are pushing ahead to get big money out of our political process and expand, not block, voting rights for ordinary Americans.

As part of the Black History Month celebration at CWA headquarters, President Chris Shelton said that our union "celebrates Black History today and all year long as we fight the fight for social justice and racial equality."

CWA's Joint Human Rights Conference will be held in Atlanta Aug. 22-24. The innovative program, put together by CWA's National Women's and Civil Rights and Equity Committees will include movement building, great speakers and panels and workshops that teach and motivate.