Fourteen members of the U.S. House of Representatives are urging the German parliament to launch an investigation into the egregious, anti-worker practices of T-Mobile US.

Led by Rep. Mark Pocan (D-WI), the Democrats threw their weight behind a petition asking the German government to use its shareholder power to pressure T-Mobile's German parent company Deutsche Telekom into enforcing international labor standards at its locations abroad. Nearly 52,000 people from Germany and the United States have endorsed this call to action.

"T-Mobile clearly has significant labor relations problems," members of Congress wrote to their German counterparts on Dec. 18. "In the United States, when people think of large, non-union companies with poor labor records, Walmart immediately comes to mind. Yet, when controlling for the size of their respective workforces, T-Mobile's rate of unfair labor practice charges since 2009 is nearly seven times that of Walmart's. The scope and frequency of the charges have repeatedly garnered the attention of the United States Congress. We believe they warrant the German government's attention as well."

The letter outlines T-Mobile's systematic campaign to block workers from exercising their right to organize and bargain collectively – and the subsequent National Labor Relations Board rulings that the company had violated U.S. labor law. That includes unlawfully prohibiting workers from discussing their pay with each other and silencing an employee who had filed a sexual harassment complaint against her supervisor.

"An overarching reason that Members of the U.S. Congress are concerned about T-Mobile is that the company appears to be operating in the U.S. in a way that treats U.S. workers as exploitable, while respecting workers' rights in other countries like Germany," they conclude. "The double standard is disturbing and unacceptable."

Looking Back at the CWA Moments and Events That Shaped 2015. 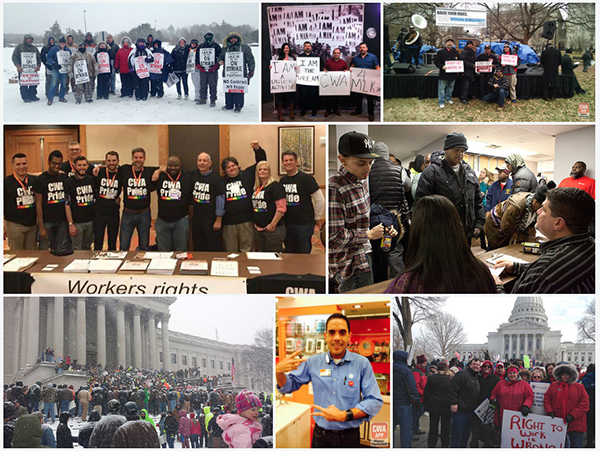 What a year! We rallied, mobilized, organized and picketed.

In New England, thousands of workers embarked on a historic and successful 18-week strike. We shone a light on the Trans-Pacific Partnership. Our bargaining teams negotiated contracts covering tens of thousands of CWA members across our industries and sectors. Thousands of workers in the airline industry, telecom and wireless, customer service and more gained a CWA voice. We fought for $15, won fairer scheduling and demanded democracy for all. CWA members voted to endorse a candidate in the presidential primary race and, throughout the year, stood together in solidarity.

Here are a few more of the images that defined 2015 for CWA members.

Activists from the American Postal Workers Union, CWA and other allies delivered 150,000 petition signatures to the U.S. Postal Service Headquarters in Washington, D.C., calling on the organization to provide affordable financial services, including paycheck cashing, bill payment, savings accounts and small dollar loans, to consumers at its more than 30,000 branches. CWA is among 27 organizations supporting postal banking.

Nearly 28% of U.S. households are under-served or completely denied service by traditional banks and are forced to turn to payday lenders, check cashing operations and other shady operators. These financial predators charge outrageous fees and triple digit interest rates for loans by targeting some of the most vulnerable Americans. The $103 billion a year that these shady operators take in costs families, on average, nearly 10 percent of their income for fees and services. 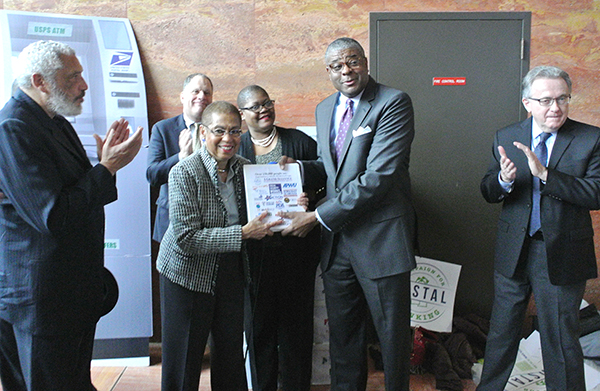 Rep. Eleanor Holmes Norton (D-DC) delivers 150,000 signatures from Americans who support postal banking to Deputy Postmaster General Ronald A. Stroman. Norton, now in her 13th term as a member of Congress, also leads the fight for full voting representation and democracy for the people of the District of Columbia.

Don't Miss it! Plan to Join CWA's Delegation to the National Jobs with Justice Conference

Activists from Jobs with Justice, the national organization of unions, community groups, environmental activists, faith organizations, students, and more, will meet for two days of incredible workshops, training and collaboration in Washington, D.C., on Feb. 12-13.

CWA has been a partner with Jobs with Justice from the beginning, and CWA members can get a special reduced registration rate, saving $50 off the $250 cost. To get this reduced rate, contact amy@masciola.com by January 22.

The conference will be held at the Hyatt Regency Capitol Hill, 400 New Jersey Ave., N.W., Washington, D.C. To reserve a room at the Hyatt with the Jobs with Justice reduced rate, click here.

Read more about Jobs with Justice and the conference here.

It's a new year and there's a new push by the corporate backers of the Trans-Pacific Partnership to get this bad trade deal through Congress.

We know why the TPP is a disaster for working families, the environment and our communities.

Now, CWAers and Sierra Club activists can learn more about our plans to defeat the TPP, the timeline for action in Congress and how every member can join in this fight in a special town hall call with CWA President Chris Shelton and Sierra Club Executive Director Michael Brune.

The TPP town hall call is set for Wednesday, Jan. 13, at 7 pm ET. To join the call, please sign-up here.

In visits to the offices of Reps. David Price (D-NC, 4th District) and G. K. Butterfield (D-NC, 1st District) CWA activists and allies put the lawmakers on notice that the Trans-Pacific Partnership is a bad deal for working families that will threaten thousands of North Carolina jobs, especially at call centers throughout the state. 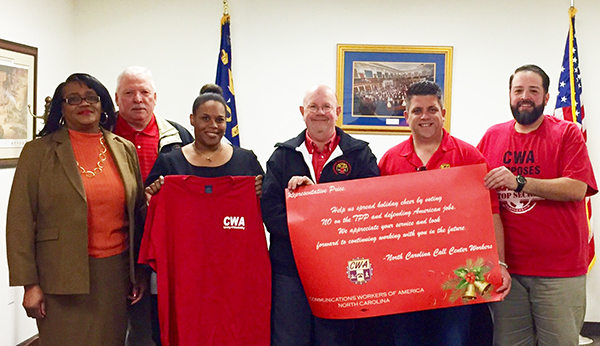 Feeling the Bern in Nevada 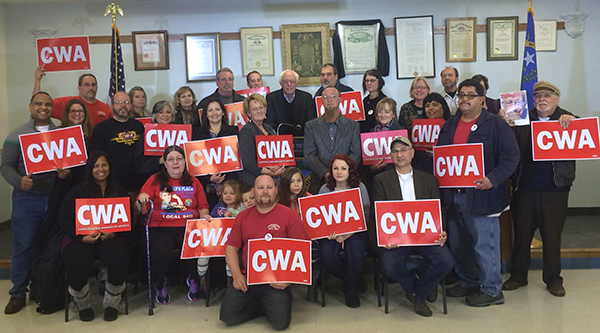 CWA activists and Local 1298 President Bill Henderson joined hundreds of New Haven residents, students, workers, union members and community activists in a march and sit-down protest over the city's job crisis outside the Yale-New Haven Hospital. Henderson was one of the 134 protesters who were arrested as they demonstrated to focus attention on the need for more living wage jobs for city residents.

New Haven Rising organized the demonstration, noting that of the more than 83,000 jobs in New Haven, only 2,000 are held by residents of the hardest-hit communities.

New Haven activists use civil disobedience to focus attention on the extreme need for good jobs in their community.

In a huge win for the No Pay No Way campaign, a Port Chester, NY, restaurant has been ordered in pay $47,000 in back wages.

"This is a great victory for the workers involved and the Don Bosco Workers organization. Don Bosco Workers and CWA Local 1103 fight for all workers, including those who are at the greatest risk for wage theft," said CWA Local 1103 President Kevin Sheil. "The result of the case is validation that we were right in identifying wage theft as a huge problem in our community, and now we need to expand upon these efforts to include other communities."

More than a year ago, CWA Local 1103 and the Don Bosco Workers' Center, a grassroots community-organizing group led by Latino immigrant day laborers and other low-income workers, joined forces to launch No Pay No Way. Together, they vowed to make Port Chester a no tolerance zone for wage theft. Since then, dozens of businesses have proudly displayed "Good Workplace" decals in their storefront windows, pledging that they follow all wage-and-hour laws.

To learn more, check out the campaign's Facebook page. 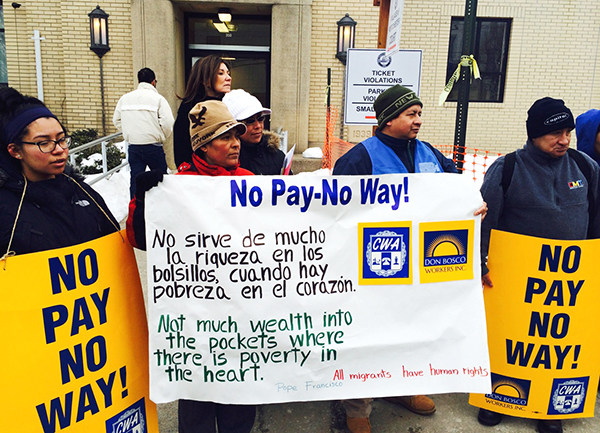 Workers protest outside the courtroom while the wage theft case was being heard.

Victory for Fair Districting in Florida; Citizens United on the Ballot in California

In 2010, Florida voters overwhelmingly approved constitutional amendments to make the redistricting process non-partisan and fairer. Finally, in late 2015, a circuit judge affirmed a new map for the state's 40 Senate districts that reflect those amendments and that will end decades of gerrymandering and partisan politics.

The map was proposed by the League of Women Voters and Common Cause, which have been working for years to make sure voters' voices are heard. CWA and allies also joined the fight to force the state to follow the will of the voters and ensure fairer districts.

In his Dec. 30 decision, Leon County Circuit Court Judge George Reynolds rejected an alternate plan proposed by the Republican-controlled Senate, noting that the Senate proposal was marked by "impermissible partisan intent" and violated the measures passed by voters in 2010.

Republicans still are considering an appeal, a move the Tampa Tribune, in an editorial, said, "would surely add to the $8 million in legal fees the Legislature has wasted over several years trying to gain approval of the flawed maps it produced."

"For the sake of the taxpayers, if nothing else, legislative leaders should end the redistricting battle and begin implementing the Senate map Circuit Judge George Reynolds approved last week. Not only would it save tax dollars and end years of chaos, it would mean the state will finally have Senate districts that adhere to the Fair District amendments voters passed in 2010."

In California, the state Supreme Court ruled that voters will be able to weigh in on a ballot initiative urging Congress to amend the Constitution to reverse the Supreme Court's Citizens United decision, which has allowed a flood of big money to devastate our political process.

The state legislature first put Proposition 49, also known as the "Overturn Citizens United Act," on the ballot nearly three years ago, yet a conservative group sued and was able to pull the measure before voters had a chance to cast their ballots. Now voters will have their say.

Members of IUE-CWA Local 83761 working at GE's Appliance Park in Kentucky have taken on the threat to their jobs first hand. GE had pushed to send more work overseas and, in fact, employment, once at 9,000, had fallen below 2,000. But IUE-CWA has been working to reverse that decline with the rollout of the Lean High Performance Manufacturing program, funded by the CWA Strategic Industries Fund.

Insider Louisville just published a great story about the turnaround.

IUE-CWA sees Lean/High Performance as a strategic approach to job security. The union can go on the offensive to improve plant operations and win long-term job security for members, before a company announces layoff plans. Read more about the IUE-CWA Lean program here.

As Insider Louisville writes, "The idea was pretty simple: People who spend their whole day building a product probably have some good insights into how to improve the product and the way it is made. Having those employees on the same campus as designers and engineers fostered communication and cooperation, which increased efficiency and improved quality."

Mike Mayes, lead trainer for the IUE-CWA Lean program, said, "Our Lean program gives workers an avenue to improve their jobs, so they can be successful." In the beginning, Mayes said, many workers worried that a Lean program was just another way for management to trim the workforce. In fact, the opposite became true. "Lean is about making and building jobs, not about losing jobs," he said.

Working together, IUE-CWA workers and GE now build hybrid water heaters, refrigerators and new washer/dryer units in America. Some of that production had been previously done in China, while other work had been slated to go to Mexico. At Appliance Park, the number of jobs has climbed to 6,000.

"This success story is a testament to the power of partnerships between employers and a committed and engaged union workforce," said IUE-CWA President Jim Clark. "The commitment of our members to the Lean High Performance culture is one of the main reasons that companies wanting a larger footprint in the U.S. market see value in Appliance Park." GE cites the plant's positive performance as one of the reason there are several interested buyers; the potential sale to Swedish-owned Electrolux was blocked by the U.S. Justice Department over anti-trust issues.