This week, the AFL-CIO released "Death on the Job: The Toll of Neglect," a yearly report on the state of safety and health protections for America's workers. The report features national and state information on workplace fatalities, injuries, illnesses, the number and frequency of workplace inspections, penalties, funding, staffing, and public employee coverage under the Occupational Safety and Health Act.

Under President Trump, many crucial safety and health protections have been repealed or weakened. OSHA now has the lowest number of job safety inspectors since the early 1970s, when the agency opened – totally unacceptable during a public health crisis.

The report notes that workplace violence deaths are on the rise and are now the second-leading cause of job death. Since Trump's election, efforts to address workplace violence have stalled at OSHA. In November 2019, the House passed the Workplace Violence Prevention for Health Care and Social Service Workers Act to protect these workers at especially high risk of violence on the job, but the bill has languished in Mitch McConnell's Senate.

This December will mark 50 years since Congress enacted the OSH Act, promising workers in this country the right to a safe job. Today, too many workers remain at serious risk of injury, illness, or death as preventable workplace tragedies continue to occur. 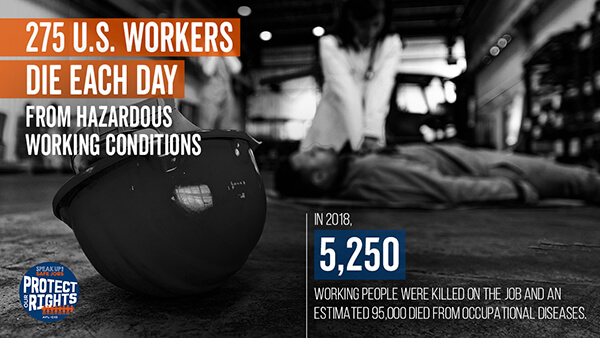