CWA Local 7050 members joined over 100 other working people in Phoenix, Ariz., for a PRO Act town hall hosted by IUPAT and the Arizona State AFL-CIO. The PRO Act will make it easier for workers to join unions and give us more power to bargain strong contracts.

Senators Kyrsten Sinema and Mark Kelly, who have not yet sponsored the PRO Act, were invited to the event to listen to workers from across all industries in Arizona share their stories about why we need to pass the bill, but did not attend.

Next week, union members and supporters will be making thousands of calls to educate voters in key states about the PRO Act. CWA members, retirees, friends, and family members will be staffing the lines on Thursday, June 17. Learn more and sign up for a shift at www.mobilize.us/wfpower/event/393348, and don't forget to wear your CWA red! 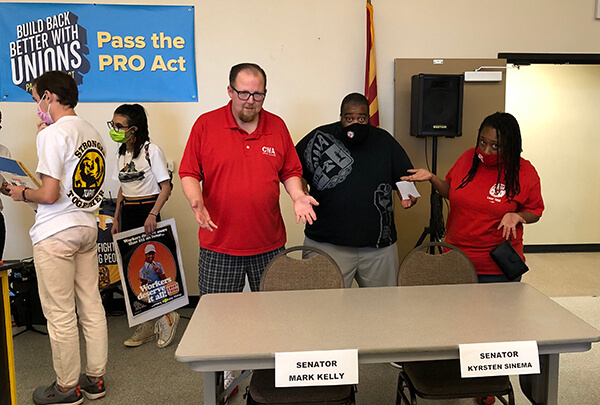 eNewsletter Issue:
Jun 10, 2021 - Essential Workers are Essential to Our Democracy, and other news