On Tuesday, after weeks of mobilizing by CWAers and other activists, a majority of Californians rejected the recall effort to remove Governor Gavin Newsom from office. CWAers in California kicked off their "Vote No on the Recall" campaign last month in an effort to keep Newsom in office. The campaign, led by three regional coordinators, Vanessa Mesa (Southern Region), CWA Local 9509; Fidel Andrade (Central Region), CWA Local 9333; and Heladio Saldivar (Northern Region), CWA Local 9421, mobilized members across the state to join weekly phone banks and weekend labor walks.

“CWA worked tirelessly since the beginning of this campaign to educate voters on what this election meant to working people. Our activists reached out to every single CWA member in the state through the weekly phone banks,” said CWA District 9 Vice President Frank Arce. “We did not waver in our commitment to fight against this shameful attempt to undermine our democracy. I have never been more proud to be part of CWA and the labor movement.”

This attempted power grab was a wasted effort by Republicans and anti-worker forces who pose a direct threat to workers’ rights. The hundreds of millions of taxpayer dollars spent on this failed attempt could have been invested in improving the lives of working people who keep the state and our country running. CWAers and other union members made the difference in this recall election. Now, we have to build on this momentum and keep mobilizing to elect pro-worker candidates to state, local, and federal office. 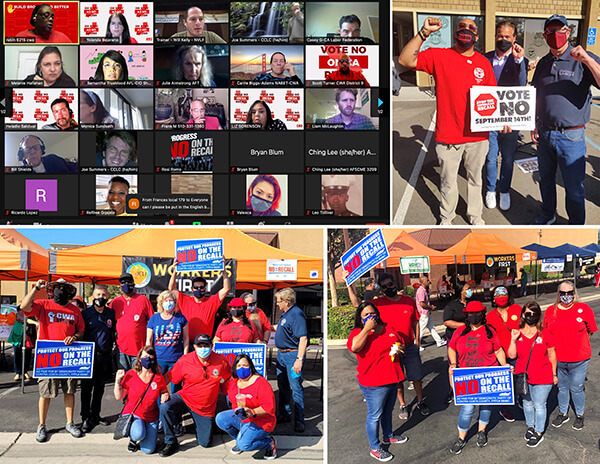 CWA Members in California mobilizing as part of the “Vote No on the Recall” campaign to keep Governor Gavin Newsom in office.