CWAers were featured at the Progressive Strategy Summit in Washington, D.C., last week, an event bringing together members of the Congressional Progressive Caucus and activists from every corner of the progressive movement. 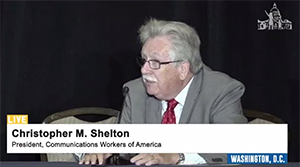 CWA President Chris Shelton talked about the power of strikes at the Building Worker Power panel.

At the Building Worker Power panel moderated by journalist and author Steven Greenhouse, CWA President Chris Shelton noted that many unions have rediscovered the value of strikes, but that CWA never wavered in its commitment to using the strike as a tactic to build union power. "We've been doing strikes successfully for the last 40 years, and it's because our members are mobilized," Shelton said.

Shelton highlighted the importance of passing the Protecting the Right to Organize (PRO) Act, a sweeping overhaul of workers' rights that will give CWA members and all workers more power to win better wages, benefits, and working conditions. It will protect strikers, make it easier for workers to join unions, prevent the misclassification of workers as independent contractors, deal a blow to "right-to-work" laws, and much more. "This bill is just the first step in trying to get unions and people back to where they should be in the workplace," Shelton said.

Check out a clip of President Shelton's panel here.

At a panel called From the Shop Floor to the House Floor: Bringing Lessons from the Picket Lines into Policy Debates, Alex Ross, a bankruptcy specialist at Wells Fargo who has been a leader in the Committee for Better Banks, a CWA project that brings bank workers together, spoke about how bank workers are fighting to improve their working conditions by forming a union.

On the same day, the San Francisco Chronicle published an op-ed from another Communittee for Better Banks activist Patrick Creavan, who also works at Wells Fargo, with a message to the bank's new CEO that having a union would help repair the damage done to the company's image by recent scandals of its management.