Activists in Houston participated in an MLK day rally organized by Martin Luther King III and Congresswoman Sheila Jackson Lee (D-Texas) to demand the passage of the Freedom to Vote Act and ending the filibuster. CWA District 6 Vice President Claude Cummings Jr. spoke at the rally about the need to protect our democracy and advance voting rights and also served as a co-Grand Marshall of Houston’s MLK Jr. Parade and Festival. 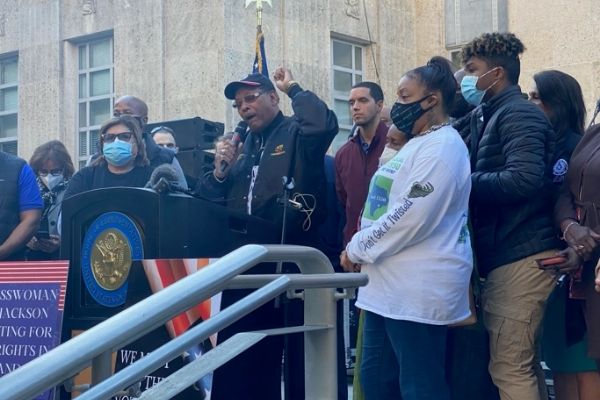 CWA District 6 Vice President Claude Cummings Jr. speaking at an MLK day rally in Houston about the need to end the filibuster and protect our voting rights.

MLK for All at Lumen Technologies

CWA members and workers at Lumen Technologies commemorated this year’s MLK holiday by fighting against the company’s discriminatory policy giving non-union workers Dr. Martin Luther King Jr. Day as a paid day off while requiring over 5,000 union members to work on the federal holiday. The company first instituted this policy last year in the wake of George Floyd’s murder. CWA members accused Lumen of corporate “woke-washing” and using MLK Day to hurt union workers. On Monday, members and supporters protested this policy at Lumen Technologies headquarters in Denver. In addition, workers participated in a virtual webinar hosted by Workers United Against Racism at Lumen. 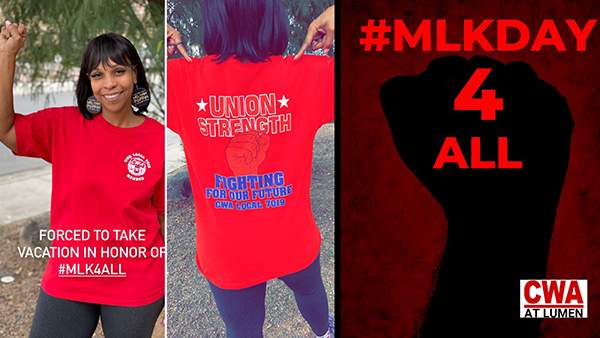 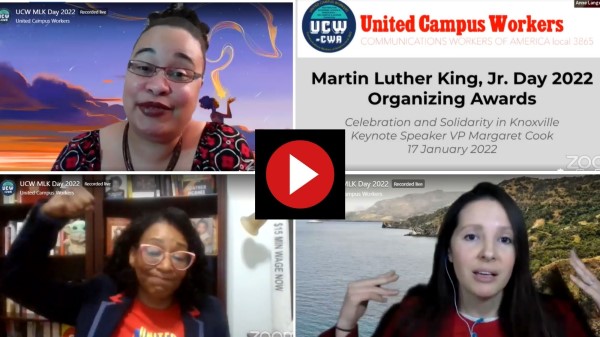 CWA Public, Healthcare and Education Workers Vice President Margaret Cook (bottom left) joined members of the United Campus Workers of Tennessee (CWA Local 3865) on Facebook Live for the local's Martin Luther King Jr. Day Organizing Awards presentation. Dr. King "believed that democracy must be real, in every part of our lives, if we are going to live with dignity and in freedom." Cook said in her keynote speech. "That meant not just the kind of democracy that is so egregiously under attack today...it meant democracy in that place that has the least democracy of all in this country. Democracy at work."