CWA was well-represented at a conference last week at Georgetown University Law Center on "The Future of American Labor" sponsored by the Albert Shanker Institute, The Century Foundation, and the Harrison Institute for Public Law.

"Our framework of workplace-by-workplace organizing and individual company bargaining is broken," Shelton said. "We must demand that progressive government take on the responsibility of creating mechanisms that allow workers to sit down across the bargaining table from the powerful so that our voices will be heard." 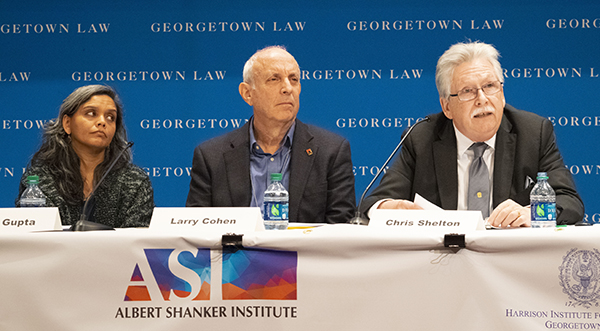 On the organizing panel, Zeis, a photojournalist at the Virginian-Pilot in Norfolk, told conference attendees that when Tribune Publishing laid off 50% of its Daily News staff last summer, she and her colleagues at the Virginian-Pilot realized that they needed the protections that forming a union provides for workers and for local news. "For many of us, it was about our papers and preserving the legacy of our papers," Zeis said.

A member of the NewsGuild-CWA's Tidewater Media Guild, Kristen Zeis (second from right), spoke on a panel about organizing millennials using digital communications.