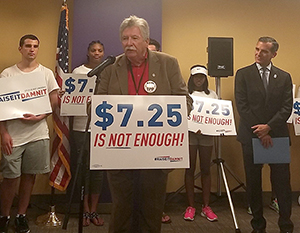 "Here in Philly, someone working full-time making minimum wage would earn about $15,000 per year, putting them well below anything resembling a living wage," President Shelton said. "It's been almost a decade since the federal minimum wage has been raised. Meanwhile, the cost of living has gone up drastically since then. But we've seen total inaction both at the federal level and here in Pennsylvania."

Coming on the heels of the most divisive and anti-worker Republican National Convention ever, more than 100 advocacy groups, including Center for American Progress, Center for Popular Democracy, Economic Policy Institute, the Fairness Project, National Employment Law Project, the Working Families Party held a national day of action on the anniversary of the last increase in the federal minimum wage, currently at $7.25 an hour. The last increase to the minimum wage was signed into law in 2007.

Shelton said, "Airline workers, call center workers, and bank workers are among those who work hard, and for some of our wealthiest corporations, but still earn poverty level wages. That has to stop now. It's time for an economy that works for working families and especially for the people who work hard but who earn poverty level wages. Raising the minimum wage is the right thing to do. Let's do it now."

Raising the wage is popular with the American public: 63 percent of Americans support a $15 an hour minimum wage by 2020, and a September 2015 poll found that, by a 3-1 margin, voters are more likely to support political candidates who favor raising the minimum wage.

Keep up with the latest at www.RaiseItDamnIt.org.