The decision by the House leadership to pull its health care proposal and not proceed with a vote is a reflection of the power that ordinary Americans have when we speak up.

This bill was misguided from the start. It was a giveaway of more than half a billion dollars to the richest of the 1 percent and big corporations at the expense of health coverage for working families, seniors, and children. It would have harmed millions of Americans as a result of the proposed cuts to hospitals, health care services, Medicaid, and other coverage. It would have hiked premiums for seniors with an "Age Tax" and cut coverage for working families.

CWA members made thousands of phone calls last week, demanding that Congress reject this sham legislation. Friday’s action by the House leadership shows that our voices and the voices of millions of Americans have been heard.

Direct action works. CWAers directly contacted at least 35 House Republicans who then came out against the bill. CWA’s efforts in New Jersey helped turn the tide, as Rep. Rodney Frelinghuysen (R-NJ), one of the most influential Members of Congress as Chair of the House Appropriations Committee, voiced his opposition to the bill after hearing from hundreds of CWAers. New York CWA members also did a great job, turning out over a hundred calls to Rep. Dan Donovan (R-NY) to get him to oppose the bill. 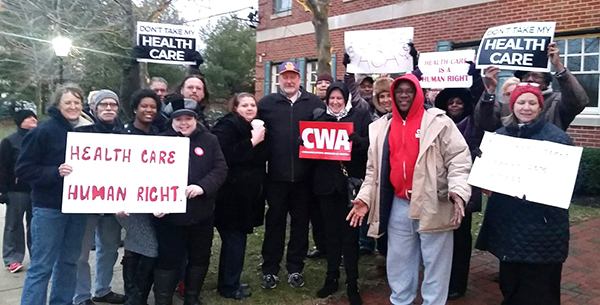