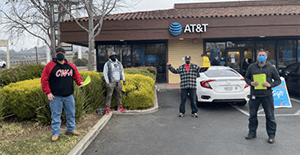 AT&T workers and community allies rallied together at a socially distant demonstration to demand change at AT&T’s Vallejo store.

On Christmas Eve, AT&T workers and community allies rallied together at a socially distant demonstration to demand change at AT&T Mobility's Vallejo store after an assistant manager sexually assaulted a worker in October. The demonstrators are calling for justice for the victim, CWA Local 9404 member Yesenia Ortiz, and accountability for Juan Moreno, the assistant manager, and Wahab Falak, the store manager, who were involved in egregious behavior; and an end to the retaliatory and toxic workplace created by management.

In October, Mr. Moreno called Ms. Ortiz across the sales floor and said, "I have a present for you," and proceeded to pull open her sweatshirt and shove a box of pens into her jacket. He then followed her aggressively as she walked away, breaking COVID-19 guidelines of standing six feet apart.

"The Vallejo AT&T store is the most toxic place I've ever worked," said Ortiz. "It's unbelievable that AT&T is aware that I was a victim of sexual assault committed by my co-worker, and yet he's been able to keep his job. AT&T needs to terminate Wahab and Juan immediately, and step in and take action to make sure that the laundry list of issues at our store is no longer tolerated."

Before the sexual assault, Mr. Moreno tore down Ms. Ortiz's Black Lives Matter sticker on her work locker at Mr. Falak's direction. The sticker was in the store's locker room where colleagues have personal stickers expressing a range of interests on their lockers. This happened despite the company's stance in support of Black lives and a commitment from AT&T's CEO John Stankey to dedicate company resources to support equality.