On Monday, CWA members hosted a public town hall meeting in Casa Grande, Ariz., with Democratic Congressman Tom O'Halleran and Under Secretary of Agriculture for Rural Development Xochitl Torres Small to discuss the need for expanding broadband access throughout the state, especially to underserved communities. Fernando Roman, CWA Broadband Brigade member and Executive Vice President of CWA Local 7026, also participated in the forum along with other panelists.

“We are forty-five minutes or so down the road from the fifth largest metropolitan area in the country and we have very poor broadband,” said O’Halleran, speaking to the enthusiastic crowd. He added, “People in rural America need to be part of the knowledge-based economy.”

“People fell behind. The [internet] speed wasn’t there. I saw that as a rural technician,” said Roman. “One of my son’s friends was sent home during remote learning and quit school because he didn’t have adequate broadband. This is the reality that COVID exposed. Thanks to the infrastructure bill, Arizona will receive a minimum of $100 million to address the unserved and under-served first.”

The CWA members in attendance expressed their shared excitement and gratitude to Congressman O’Halleran and the Biden Administration for making expansion of broadband access to rural areas a priority. Read more here. 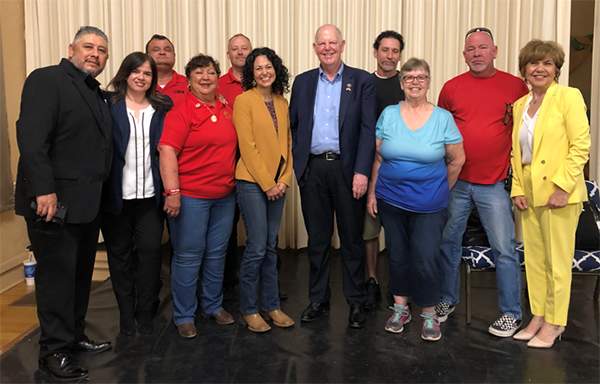