CWA Members Fight Against Injustice at the 2022 Human Rights Conference

CWA members from across the country gathered in Phoenix, Ariz., for the 2022 CWA Human Rights Conference, presented by CWA's Women's Committee and Civil Rights and Equity Committee. The four-day conference, themed “Where There is Injustice, You Will Find Us!”, focused on CWA’s efforts to fight against racism, sexism, religious intolerance, nationalism, and other biases that have systematically held communities back.

“Our union’s power comes from representing our members on the job, organizing new people into our ranks, and building solidarity with other movements for social and economic justice through politics and movement building. This work can’t stop when our members clock out for the day. This understanding is what has been driving our work to combat racism and other injustices wherever they exist, including in our union,” said President Shelton. He also highlighted the the work CWA has done as an organization and the work CWAers do every day to fight for justice and equity in the workplace and the community. Stressing the importance of electing pro-worker candidates into office, Shelton added, “I have said it many times before and I will say it again: elections matter! Every election matters! The upcoming elections this year and in 2024 are an opportunity for us to say enough is enough.”

The high point of the conference was the Interactive Activist Mall, where members participated in activities in support of CWA-endorsed candidates and legislation. The activities served as real time examples of actions members can replicate at their locals. Participants of the conference also had the opportunity to attend several workshops focused on voting rights, reproductive rights, LGBTQ+ rights, and voter mobilization.

During the conference, President Shelton swore in Keith Gibbs, President of Local 9412, who had been appointed as the Western Region, Diversity at Large Executive Board Member. Gibbs was appointed to fill in the vacancy on the Executive Board after Dante Harris was elected as Secretary Treasurer of AFA-CWA. In addition, Timmia Wiley McIlwaine, Area Vice President of CWA Local 3640, received the Mary Mays-Carrol Award and District 4 Vice President Linda L. Hinton received the Women’s Committee Award for Excellence in Women’s Rights. 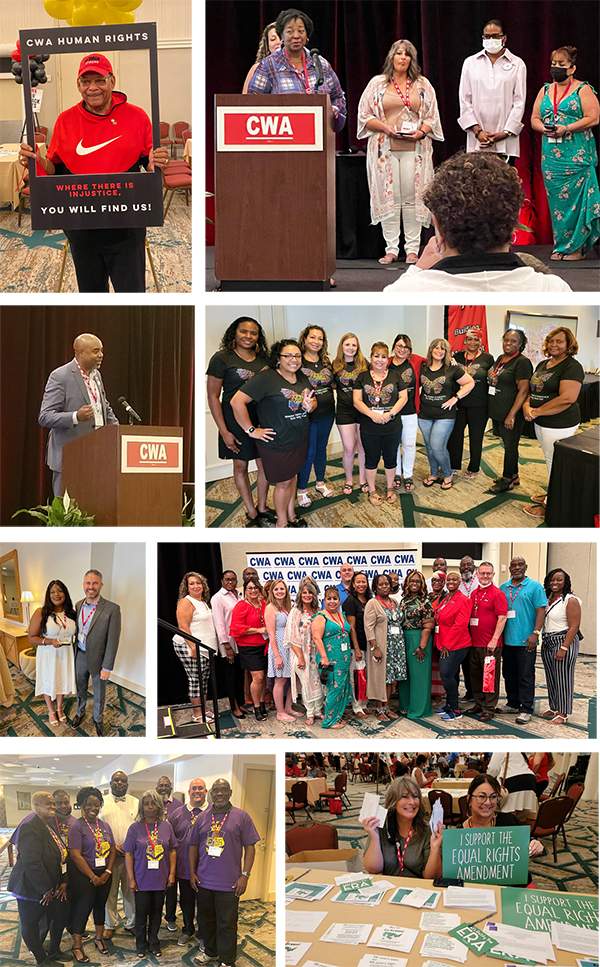 CWA members from across the country gathered in Phoenix, Ariz. for the 2022 CWA Human Rights Conference. presented by CWA's Women's Committee and Civil Rights and Equity Committee.