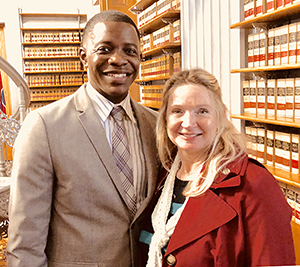 James Shaw, Jr., a member of CWA Local 3808, heroically stepped in to stop a gunman during a shooting at a Waffle House in Antioch, Tenn. on Sunday. After the gunman shot and killed four people, Shaw wrestled the assault-style weapon away from the gunman, bravely saving the lives of many other people at the restaurant.

Shaw, a wire technician at AT&T, was honored with resolutions in the Tennessee State Senate and House.

"His actions on that fateful morning are unfathomable to most, indescribable by even the chief of police, and very poignant to the citizens of Nashville, who are deeply grateful for his brave actions in the face of extreme adversity that saved many lives," Tennessee State Senator Brenda Gilmore (D-Nashville) wrote in the resolution.

"We are so proud to have Mr. Shaw as a CWA member representing labor in such a positive way," said CWA Local 3808 President Deborah Sisco.