CWAers have joined forces with other unions, activists, community groups, and Good Jobs Nation for a Midwest Pickup Tour to mobilize working families in Indiana, Wisconsin, Michigan, Ohio, and Pennsylvania.

The tour focuses on how the offshoring of good jobs harms working people and communities, and calls out elected officials, including President Trump, for breaking their promises to bring good jobs back to the U.S.

Speakers at every stop are calling on Congress to enact the U.S. Call Center Worker and Consumer Protection Act, H.R. 1300 and S. 515, which requires that U.S. callers be told the location of the call center to which they are speaking and offers callers the opportunity to be connected to a U.S.-based center if preferred, and makes U.S. companies that off-shore call center jobs from the U.S. ineligible for certain federal grants and taxpayer-funded loans.

CWA President Chris Shelton said, "We need action, not empty words from politicians, to keep good jobs in our communities. Offshoring has led to the loss of hundreds of thousands of good jobs and is pushing down the wages of U.S. working families. Good U.S. call center and technology jobs are being moved overseas while call centers in the Philippines, India, and many other countries are rapidly expanding to service the U.S. market. U.S. workers shouldn’t have to compete with overseas operations that pay a dollar an hour and force employees to work 12-hour days."

Watch video of the CWA speakers in Indianapolis here.

In Bloomington, CWA Local 4818 President Justin Hawkins, Smith-Vaughn, Phillips, and others led a rally outside an empty GE plant. Joining the rally was Liz Watson, Democratic candidate for Indiana’s Ninth District in the U.S. House, a strong supporter of the call center legislation.

"We all know that the rules are rigged against working families. That's why some of the biggest and richest U.S. corporations can get away with sending good jobs offshore," Hawkins said.

Under the Good Jobs Nation banner, workers and activists also are calling out President Trump for refusing to sign a single executive order to stop offshoring by federal contractors who receive more than $1.3 trillion in taxpayer dollars every year, despite his campaign promises to bring jobs back.

Read more about the tour here. 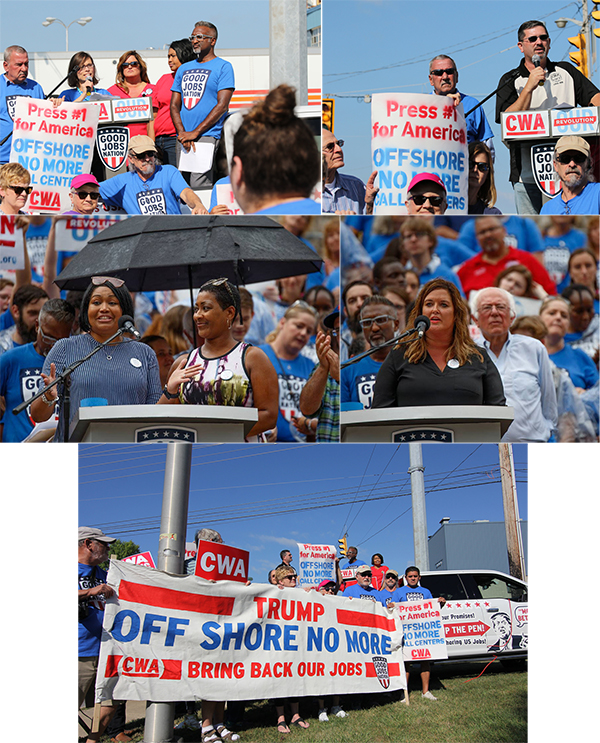