Call center workers employed by Maximus have filed a complaint with the U.S. Department of Labor calling for the Biden Administration to revise pay rates for tens of thousands of federally contracted customer service representatives who are earning unfairly low wages. 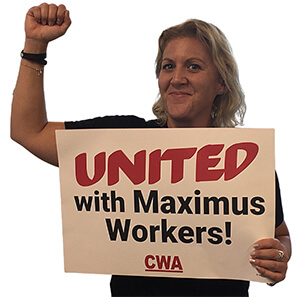 CWA members showed their support for Maximus workers during the 2019 Customer Service Week of Action.

The workers, who help Americans navigate access to Medicare and the Affordable Care Act marketplace, would earn about 22% more than their current pay if prior administrations had set their rates fairly and accurately. Workers doing similar jobs directly contracted by the Internal Revenue Service and Social Security Administration earn more than $50,000 per year, while the Maximus workers earn $30,000 or less.

The Biden administration recently raised all federally contracted employees' wages to a minimum of $15 per hour, which was only a first step, according to Jamie Brown, a Maximus employee in Mississippi. "We are organizing a union and need Biden’s support in our fight to truly close the pay gap," said Brown.

A new report by the National Employment Law Project (NELP) reveals that the Centers for Medicare and Medicaid Services has lobbied to suppress essential call center workers' wages for more than a decade and failed to keep workers safe on the job. The NELP report also found that Maximus opposed workers' efforts to organize with CWA as part of its attempts to stop pay hikes and improvements in working conditions.